OK, the “Flying Wheels Summer Century” doesn’t really sound like the type of event for a fold-up bike. And sure enough, it was full of whooshing bikes, drop-style handlebars, and very in-shape, well-chiseled physiques. But if this full-size folding bike is going to be a primary recreational vehicle–or commuting option–for people, then eventually it has to pass a test like this. 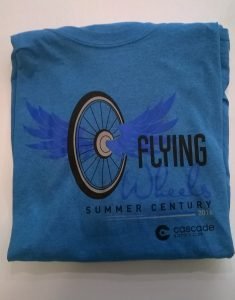 So last Saturday, I became my own test case, riding 104 miles on a CHANGE folding ruggedized hybrid. Well…110 miles actually. I rode from my city to the event’s start city.

Here are my top 5 observations from the ride:

100 miles is a long ride–and feels even longer if it’s an unsafe ride. The Flying Wheels century, run by Cascade Bike Club, is an exceptional event, with ample safe roads, crossing guards, route markings, and food throughout the event. And by winding everyone through at least seven different cities during the day, it makes the case very clearly that bikes are transportation. 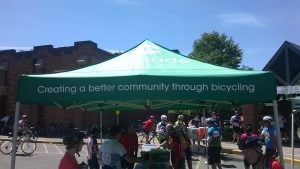 The best events combined a sense of shared adventure with good support, good food, and good causes. This had all of them.

Actually, not “everyone” rode through all seven cities. A half-dozen bailout options along the way helped many riders get back to the finish quicker, including all but one of the six other hybrid or mountain bike riders I saw out there. The course design was brilliant.

While my own choice of my everyday folding CHANGE bike was pre-decided, I was surprised at how many folks had dusted off an old speed bike and hopped on it for the first time this year. A rider behind me commented on how he had forgotten how much his bike creaked, and a rider in front of me had his chain fall off (!) as he temporarily sprinted by me.

Even the good bikes had issues, because a super-lightweight bike is also a frail bike. During the ride, I must’ve seen single or groups of riders every three miles fixing flats on those skinny tires. In a century ride, that’s 30+ roadside incidents. My own tires were beasts on this bike, probably with lots of extra friction, but I also rode over crushed glass at one point with no consequences. And… I folded my bike into half a spot at a crowded rest stop, which made another rider compare my bike to a smart car. Biking made easy!

How do you ride a century race? Like you did in practice! Um, yeah. About that… My longest training ride was just 30 miles, so I was really counting on three other attributes to carry me through: (1) Recognition that my ride was going to be about completion and scenery, not speed, (2) A bike with lots of gearing options, to vary things up a bit and avoid injury, and (3) Enough stubbornness to not take the bail-out options, even as my riding partners often did. 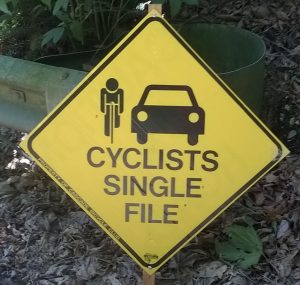 A good habit for all riders to develop is to avoid riding side-by-side when cars are around. I saw bikers who clearly understood the car perspective and others who were nonchalant about impatient pickup truck rivers. If you want respect, you have to give it!

The eye-opening lesson of this ride was that the low-gears were not my biggest asset on this ride. Sure, I could ride up all hills, and used lower hill gears more in the tiring last 30 miles of the ride. But most of my time, I found myself living in gears 25-27 at a comfortable cadence–not quite the cadence of the racers around me, but ample enough to enjoy the speed, sit back and enjoy the ride.

Rest stops exist for safety and enjoyment. This event had them every 20 miles, and in 85-degree sun, it’s super-important to refill those water bottles every chance you get. I drank over a gallon of water during the ride.

And the food! When you’re doing the equivalent of a 10-hour spinning class, you need all the protein, sugar, carbs, and salt you can get. It’s not often you hear, “Have a donut; it’s good for you”, so enjoy the moment! 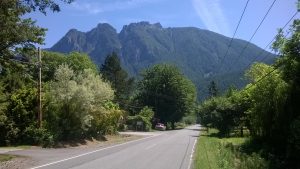 Pace lines are fun sometimes, but once you accept that you’re on a long, relaxing ride, it frees you. Majestic forested mountains? Take some pictures. Panoramas of rural fields and small towns? Sit back and take it all in. This isn’t a race; this is life.

My only regret was whizzing past a dejected girl at a roadside stand trying to give away lemonade (for a donation, no doubt). By the time I disconnected from the pace line mentality, realizing that her pitchers were full and I’d passed up an opportunity to support youth entrepreneurship, she was out of sight. (So at the only other lemonade stand of the ride, I had four glasses to make up the difference…)

Afterwords, I really didn’t feel like riding back home. And the car that came for me had no bike rack. But with a CHANGE bike, who cares?

Happy riding! (And a car to ride in when you’re done).