Flatbike, Inc. actually started because of a handlebar annoyance. When my exercise regimen needed to shift from running to cycling, I also needed to put my bike somewhere after exercising. So, with my side of the garage already full of boxes, I naturally left it on my wife’s side, against the wall, right where she needs to open her car door.

She was not impressed. 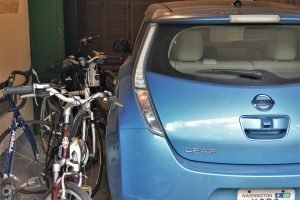 I tried to engineer my way out of the problem. When she insisted that the bike be moved because of the protruding handlebar, I countered that everything was fine and the bike simply needed to change shape.

She remained unmoved, so the bike had to move instead. But I also embarked on a journey to make bikes at rest take up less space, without sacrificing stability that is so essential to the steering end of the bike. 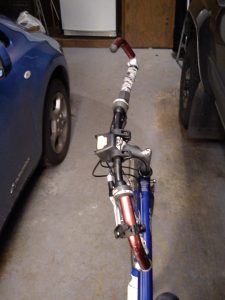 If my bike could just do this…genius!

On the surface, the problem is simple. A folding stem moves the bars. So just make a stem that is delicate enough that someone with grip issues can loosen it in seconds, yet tight enough to pass European reliability tests for ruggedness, like this one:

A Newton is about 1/5 of a pound, so this stem test represents 585 pounds of rider force on the handlebars.

In practice, easy movement and stable non-movement are tricky opposing goals to balance in one device.

To the average rider, the industry shift from quill to threadless stems happened almost overnight.

Some advanced bike users, recognizing the need to twist handlebars in tight spaces, insist that they can do it easily with just a hex wrench, ignoring that repeated screwing and unscrewing of a thread eventually wears away the threading for a loosened joint. This is one joint you don’t want loose! Besides, who really wants to carry around a hex wrench all the time? 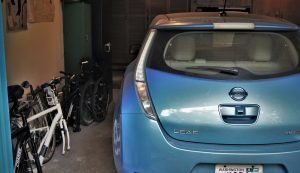 Much cleaner garage. Now can we solve it without buying new bikes?

Years later, at the Toronto International Bike Show, where I was showing CHANGE full-size folding bikes, another vendor showed me a folding stem he had invented. It was rugged, elegant, and easy-to-use, all in one package. And it worked with anyone’s bike. Here’s how.

The THINstem consists of a standard threadless stem attachment, plus an easily gripped cam latch at the bars.

With a THINstem, it is actually a smart idea to leave your bike in the hallway. You’ll use it more.

I thought this short video summed up the value nicely.

So what do customers have to say about THINstem?

NOTE: A THINstem lifts the bars up about an inch. So it was interesting to see support for THINstem not only among road bikers above, but also at the Bike Expo NY, where I debuted it on a prototype folding road bike.

Three things to know when buying a THINstem.

If you’ve never disassembled any parts of your bike beyond a quick-release front wheel, installing a stem may seem a bit daunting. But three bits of knowledge will keep you out of trouble.

It needs something to clamp around (see above). If that’s what you have already, congratulations, you’re halfway there.

If you have the old quill stem, you’ll need a quill stem adapter. They’re pretty cheap, but depending upon the design and age of your existing quill stem, removal may involve threading it over one whole side of your handlebar. If this project makes you queasy, your local bike shop is a great asset. If it makes you excited, full speed ahead.

Handlebars are basically one of two diameters–small (1″) and large (1 1/4″). Sometimes, they’re described in millimeters (25.4mm and 31.8mm), but it’s the same sizes. Sometimes a bar is small at the ends and large in the middle, where it connects to the stem, so we call that large from a stem perspective.

If you’re concerned about being accurate to the nearest quarter inch, here’s a simple trick. Wrap a string once around your bars near the stem and use a pen or sharpie to draw a line across where the string overlaps. Then unwrap the string and measure between the marks. Is is close to 3 inches or 4?

Now you’re all ready to order your new THINstem from Flatbike. And if you’re adding to a CHANGE bike, you already have pop-off pedals, which make a nice combo.

2 responses to “Fold a non-folding bike” 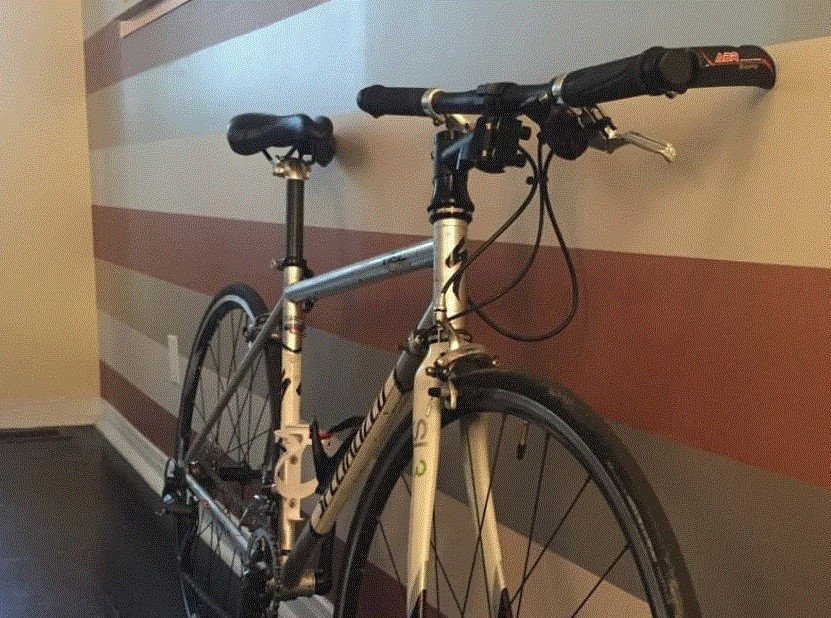