Ultimately, it comes down to your needs and goals. What type of riding will you be doing? Do you need to absorb high-speed vibrations, trail debris impacts, or the massive downward forces after a jump?

If you’re going to ride like this, get a bike built for it.

Here are four different ways you might ride, and what type of MTB is best suited for that: 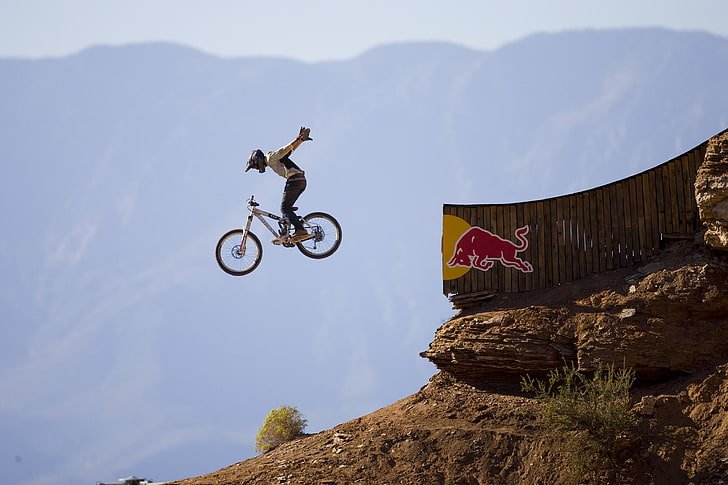 Any MTB can handle falling through the air; it’s the sudden vertical stop at the bottom that requires a true downhill bike for safety.

That’s as far as most mountain bike analysis usually goes before diving into the weeds of bike angle geometry and model pricing. But for us, it’s the starting point for discussion about convenience and security with your exciting new mountain bike.

The most important decision you’ll make.

By the time bikes are at the quality where they are associated with one of the styles of riding listed above, it’s not unusual for them to cost $2,300 to $6,000 or more. That’s quite an investment.

So let’s talk about that investment:

The simplest answer is to just fold your mountain bike in half for greater portability. Carry it upstairs easily, whether in an elevator or a narrow stairwell. Store it securely in your living area, without compromising on living space. And transport it hidden in your trunk, eliminating all concerns about off-the-rack theft.

It’s a great concept in theory, but here’s the problem.

The market is flooded with hardtail and even full-suspension bikes that fold in half. But almost universally, they eliminate the downtube, beef up the top tube, and put a massive hinge in it, like this… 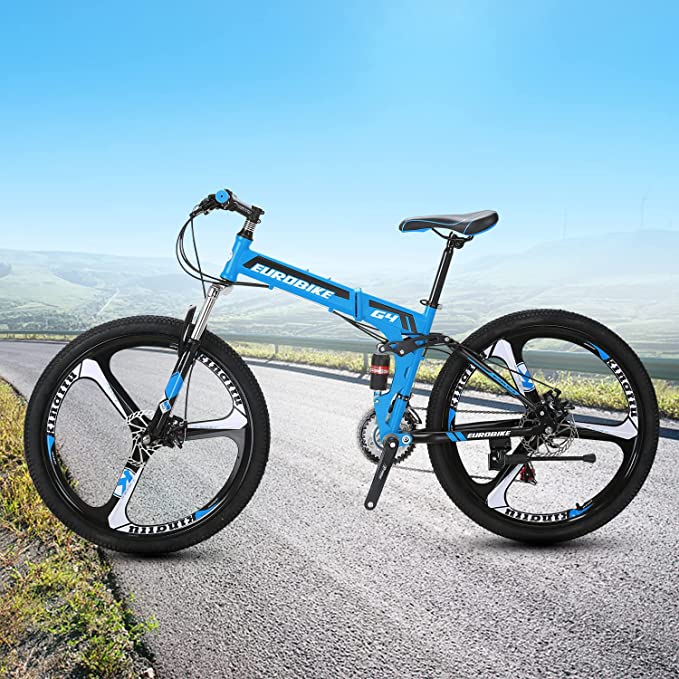 From a stress standpoint, that means the built-in strength of a standard front triangle is removed at the same time that the top tube also gets four built-in failure points: a weld, a hinge, a latch and another weld. Failure at any one of those weak points can split the bike in half during your ride.

Downhill, anyone? Or any of the other three types of mountain biking?

Ultimately, when opting for or against this approach to folding, you’re faced with a massive tradeoff; Do you compromise on safety or security?

The answer to this dilemma is in international standards for bicycle frames. Specifically, the ISO-4210 suite of destruction tests, which uses machine-induced stress to simulate 10 years of heavy use. It includes:

While that sounds great in general, letting machines discover any problems so you don’t have to uncover them with your own body, let’s dive down into one test for a moment–the fatigue test with horizontal forces, which looks like this…

Think of this as the “frequent obstacles” test, which simulates the real-world stress of routinely hitting tree roots on trails and pothole edges in city riding, putting 1,200 newtons (about 270 pounds) of horizontal impact on the frame 50,000 times. The CHANGE 833 folding mountain bike frame has passed this test and everything else in the test suite.

What makes the latching mechanism on this particular frame so much stronger? This latch. 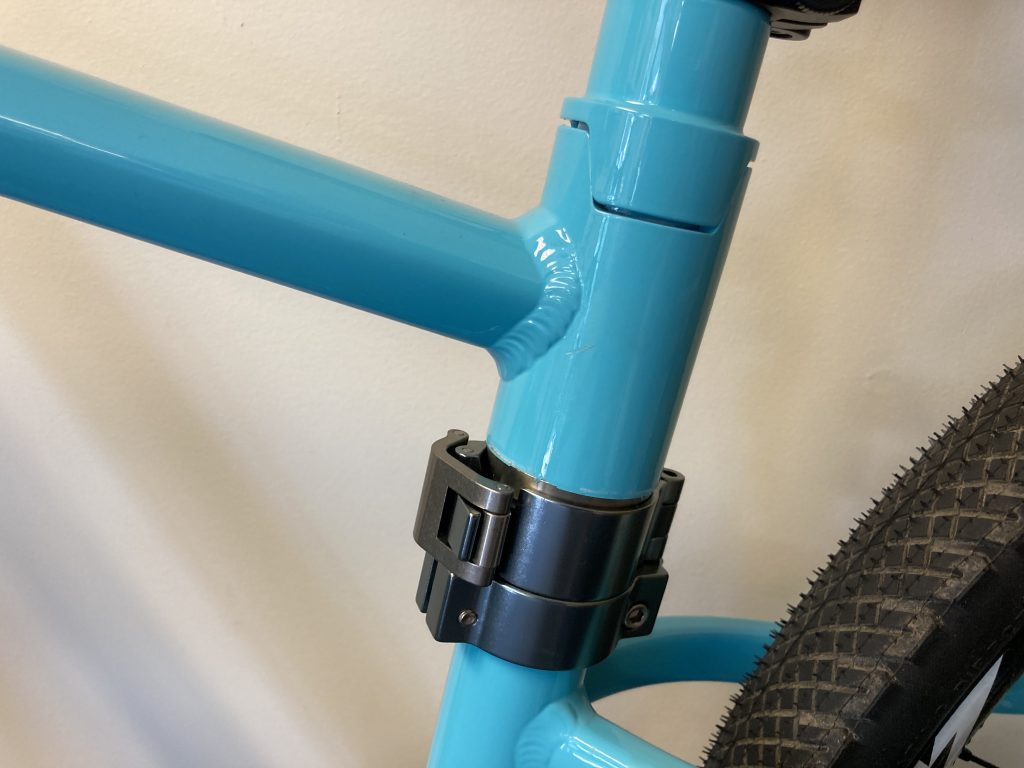 The sole purpose of this bike is to keep the large teeth above it engaged. Those keep the bike from folding. What else keeps the teeth engaged? A secondary simple cam latch below the crank. And simply sitting on the seat. 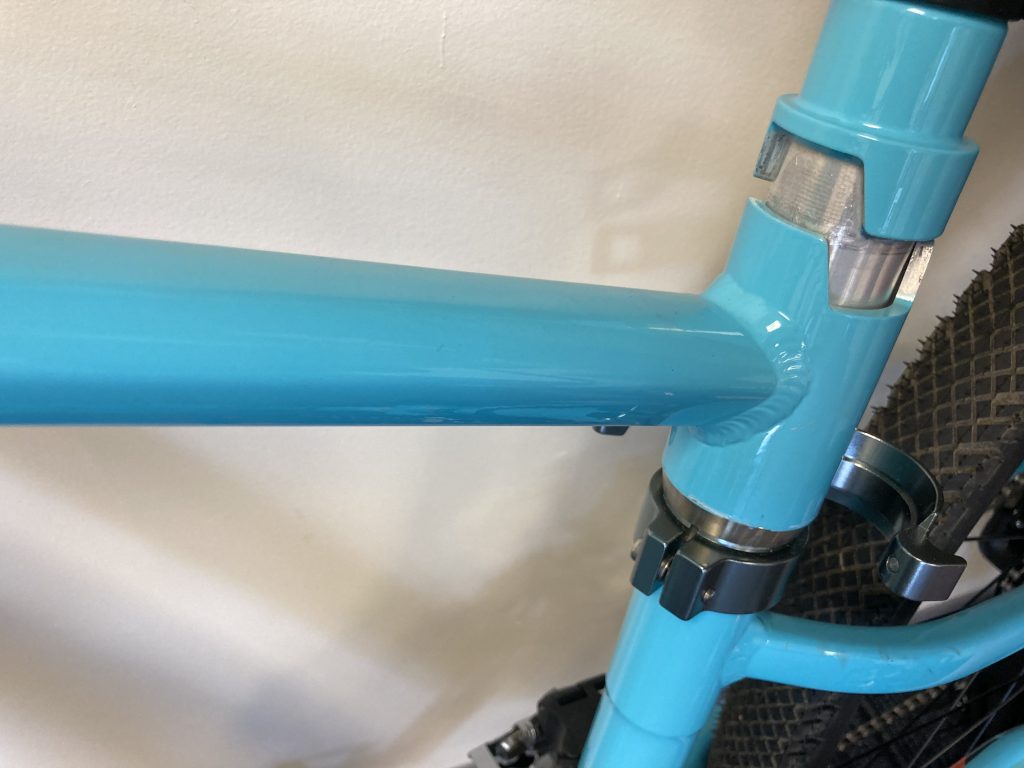 The latch is two-sided, like a ski boot latch. With it open, the seat tube is free to move up against the top tube–just pull up on the seat–and the teeth are no longer engaged. 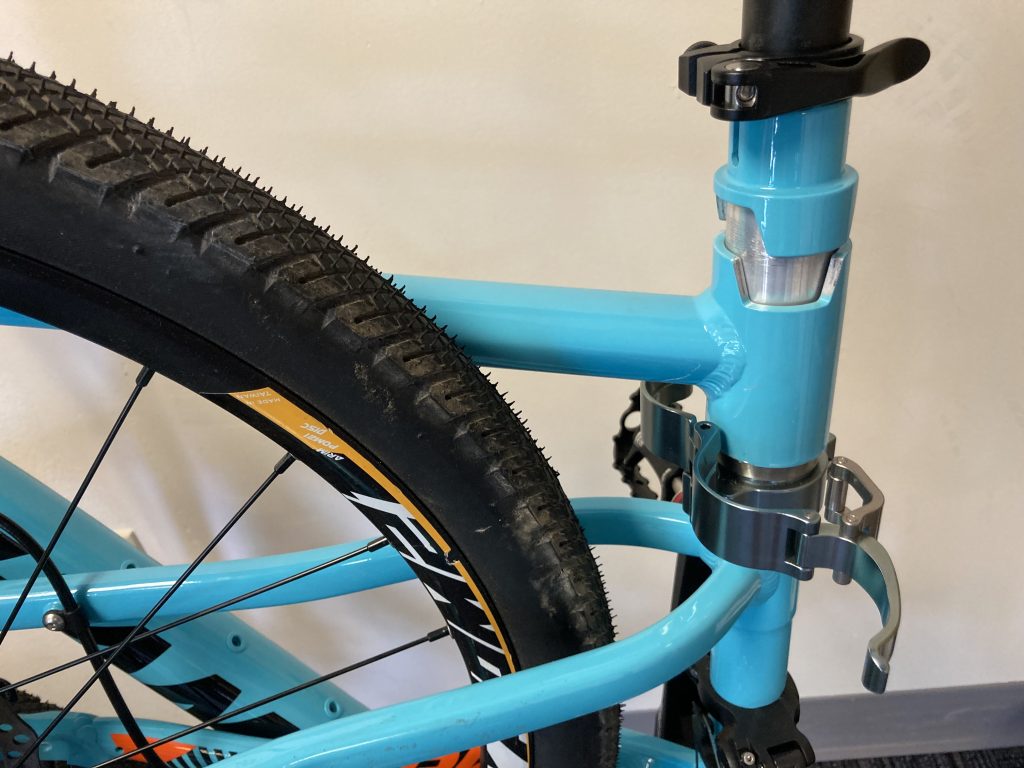 With the top tube and seat tube now not held together by the teeth, half the frame is free to rotate enough the seat tube, cutting the length of the bike in half.

And just like that, your bike is able to fit into spaces half as long.

Now that we’ve got a solid foundation for a folding mountain bike, what can we build around it for the best portable adventure?

Which type of mountain biker are you?

The first type of mountain biker we’ll call the practical rider. You want to get smoothly from Point A to Point B, and it’s rough enough that you’re going to need shock absorbers.

Maybe it’s a neighborhood that’s been semi-pseudo-never repaved since you’ve lived there, or maybe your commute intentionally takes you over some rugged trails. Honestly? You probably don’t even know all the places you’ll be going, but you want to be ready for any of them.

You’re going to need the “Swiss army knife” of mountain bikes, with wide enough gearing to go up and down hills easily, while picking up speed on the flats. And you’ll want tires that are wide enough to offer more shock absorption and void sinking in sand or gravel, but without all the knobbies that can slow you down on paved roads.

If this is you, the CHANGE 809 folding street MTB is the bike for you.

The CHANGE 809 is a folding mountain bike that features Suntour XCR-32 air shocks, triple crank with 27-speed Shimano shifting, mechanical disc brakes, and 1.5″ wide 2.75″ tires for cushioning and grip on paved roads, gravel paths, dirt paths and anywhere else your trips take you. 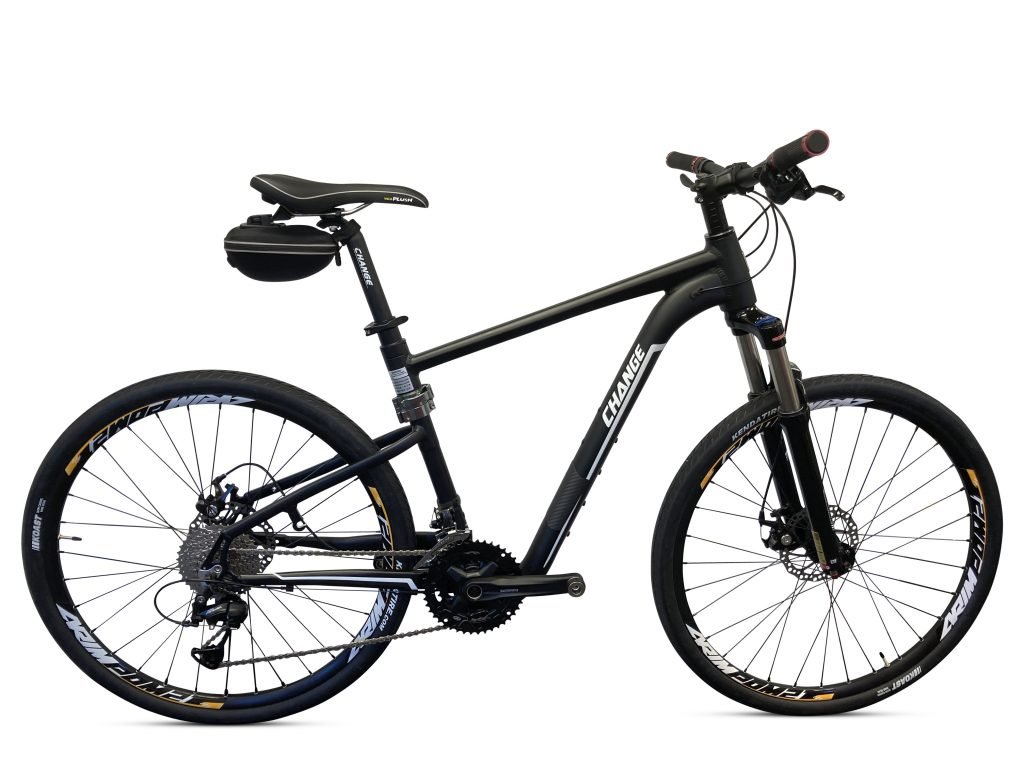 Unfolded for smooth riding across any terrain. 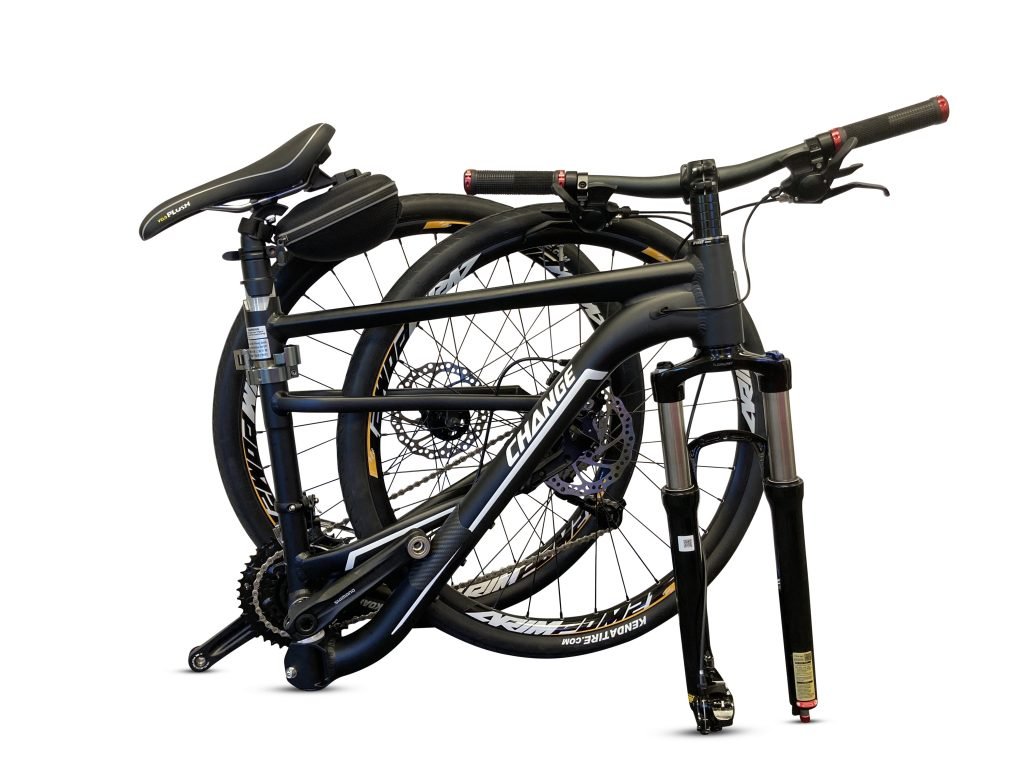 Folded up post-ride for secure storage or transportation. Enjoy your post-ride meal without watching everyone in the parking lot.

If this is you, the CHANGE 812 folding off-road MTB is the bike for you.

The other type of mountain biker we’ll call the thrills rider. Point A to Point B isn’t half as important as what’s in between. Technical track? Catching air? Gnarly twists and turns? In this rider’s hands, the bike may actually never see a paved road.

“Folding is (literally) a cinch. The vertical forces on the downpost feel reassuring psychologically but when riding – it feels somewhere between my old Gary Fisher Mendota and my main Cannondale Quick Carbon 2.

In that regard, it is magical. The included bag is already exhibiting the tender ministrations of Alaska Airlines baggage handlers but made it unscathed from Seattle to Palm Springs where I rode it to the top of Chaco Canyon and beyond. I cruised at about 17-20mph (I’m old and fat) and barreled downhill close to 40+ with nary a wobble. The bike is completely uncompromised in practice. No vibrations, wobbles, or issues of ANY kind… I’m still kind of amazed I never heard of this bike until now.”

What do you get in this performance folding mountain bike? 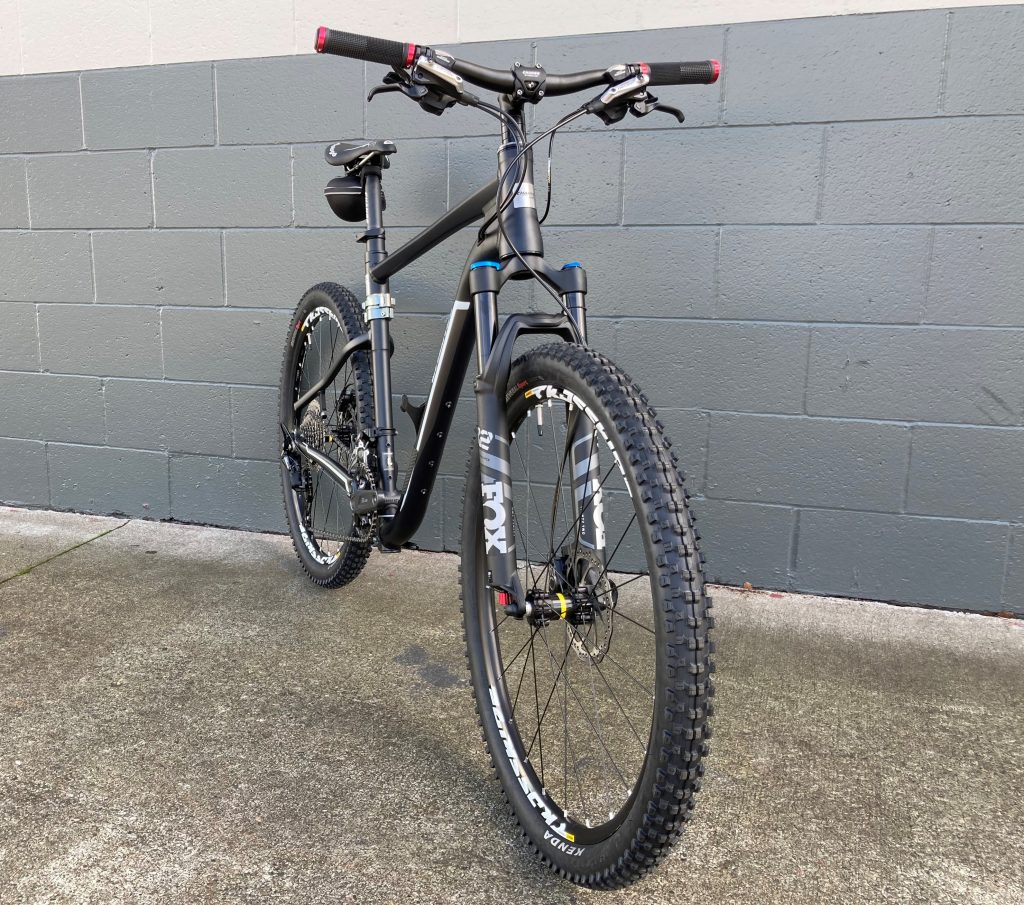 The CHANGE 812 folding mountain bike features a FOX 32 Performance air shock (a $600 component by itself), hydraulic brakes, and rugged Mavic Crossride wheels with 2.2″ knobby tires for even the most rugged terrain… 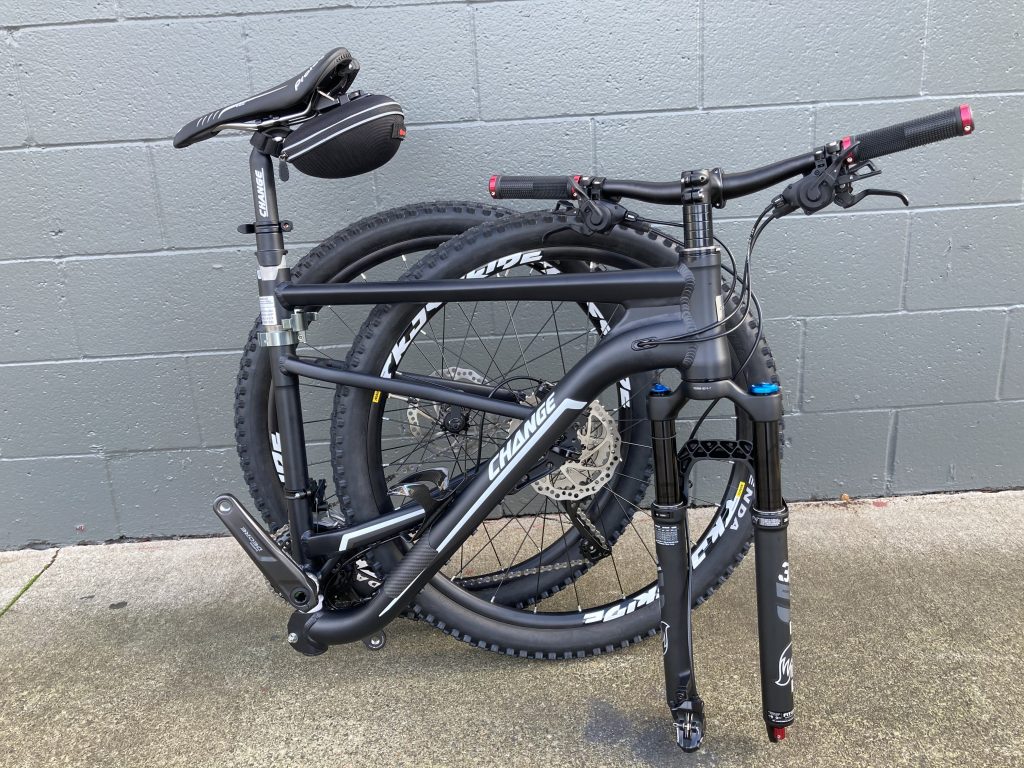 Gearing is 2 x 10, with emphasis on climbing. So whether you’re looking for a trail riding bike, cross-country, or even enduro, this bike should be on the short list for anyone who spends a lot of time off-road.

Or maybe just anyone who does this on his first CHANGE 812 ride!

From practical and utilitarian mountain biking to biking thrills that are anything but practical, we’ve got you covered.

What are your needs in a mountain bike? Can we help? 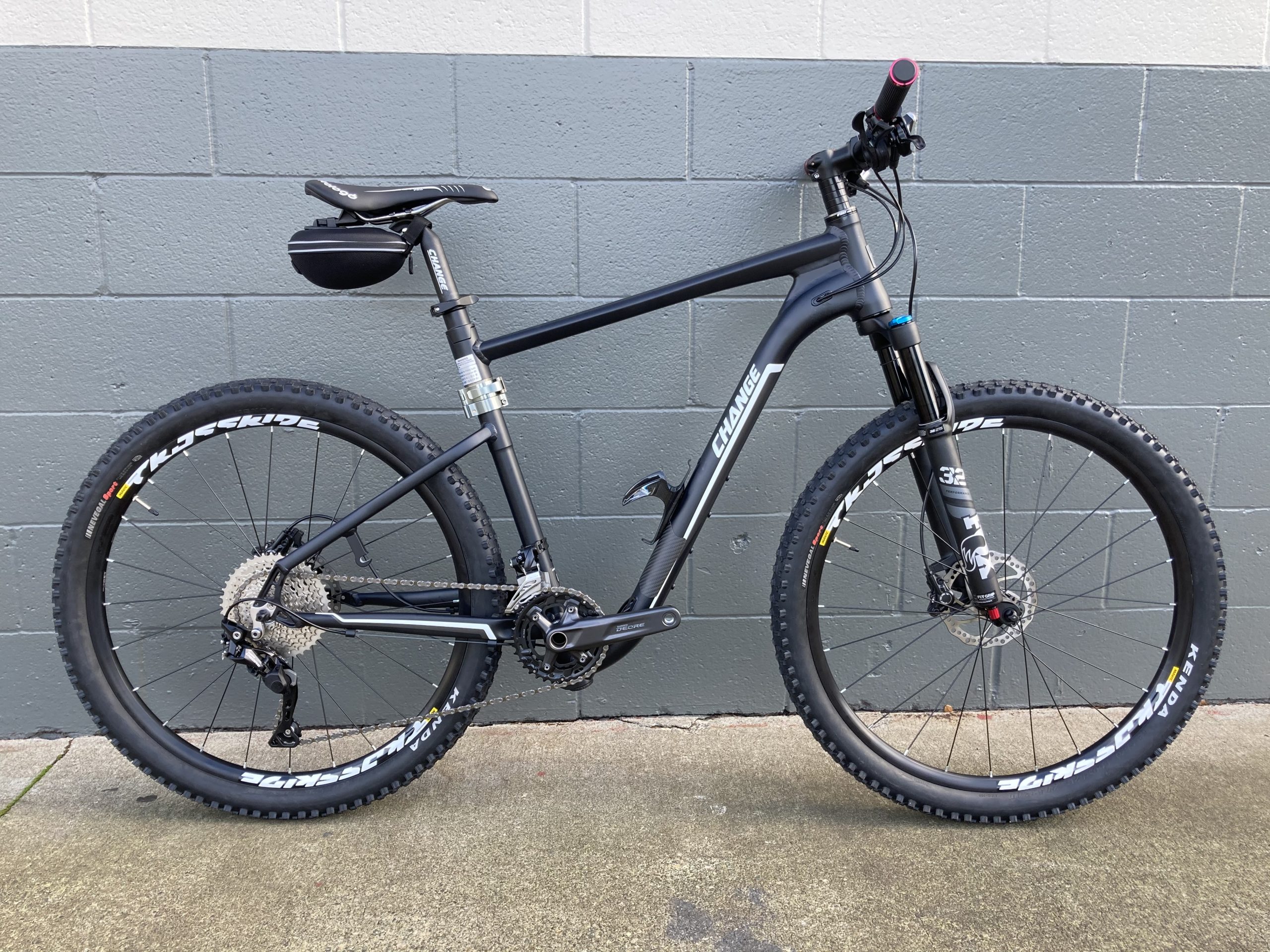