As easy as riding a bike???

For 60 years, there’s been a bike competition in Europe so incredibly difficult, it boggles the imagination. And no, it’s not the Tour de France; that’s been around for nearly twice as long, and all they do is race hundreds of miles up and down the sides of mountains. Pfft. 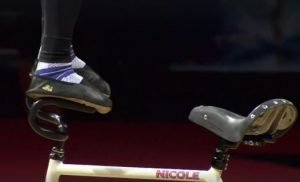 This sport is called Artistic Cycling, and it’s hugely popular in Germany, among other countries. Take a fixed-gear bike, put it in the center of a gymnasium, and defy gravity for an entire routine. In world competition, that means teams of two, balancing on their bikes for six minutes and 25-30 tricks, riding every conceivable way but how those Tour de France cyclists do. Seats are for wimps.

The coolest guy in my neighborhood growing up could ride a wheelie for a whole block. These women can do that in their sleep…synchronized!

What do you do when synced wheelies are too easy? Stack them! Just because you can…

The teams to watch.

Well, Germany, of course, where there at least 10,000 participants. World Champions Sandra Sprinkmeier and Katrin Schultheis, from Germany, are the most successful artistic cycling pair. But they face stiff competition from Austria, Switzerland, France, and Italy, the Czech Republic and Japan. 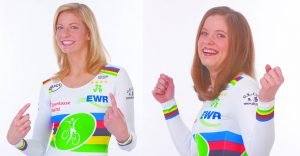 Sprinkmeier and Schultheis are cheering for artistic cycling to get as popular on ESPN as sports like poker and golf.

And that’s about it. Seven countries, none in our part of the world. Which is why you won’t see this amazing sport on ESPN.

Coming to a gymnasium near you anyway?

If you live in the Seattle metro area, you’re in luck. Since 2010, the Seattle Bike Expo has occasionally had artistic cycling demos from world champions on tour. Is 2017 another lucky year to see it? How about if we request it?

If your city has a cycling club that occasionally has a tradeshow, ask about welcoming an artistic cyclist to your city. Heck, make it a highlighted event for a fundraiser. If they can make the bikes balance like that, we can certainly make the numbers balance out, right?

See you on the bike paths! I’ll be the guy still trying to make a wheelie go more than three pedal revolutions…

Credits: Thanks to popularmechanics.com, usatoday.com, and Becky for reminding me of the beauty of this sport. 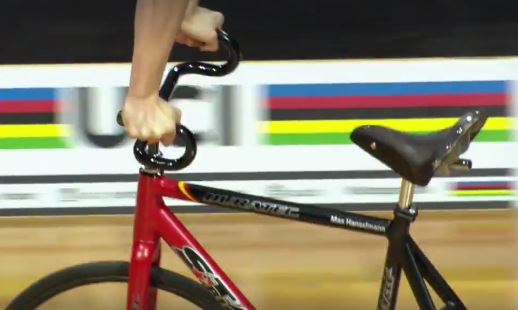