What level of quality is right for you?

A Sears ad insert fell out of the paper I was reading yesterday. Three types of derailleur bikes for just $249.99–regularly $349.99. Such a deal! 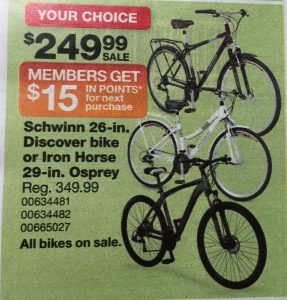 The more you know about bike design and maintenance, the more interesting this offer gets. What costs less than $250 to make and distribute?

This sale price is roughly what my first multi-speed bike cost–a Schwinn Varsity, circa 1974. Near the low end of the Schwinn derailleur models, it had 10 speeds, narrow rims, hand brakes…and tipped the scales at 42 pounds. The bike represented teenage freedom, and I put thousands of miles on it, while learning–by necessity–how to replace and maintain every part on the bike.

Today’s low-end bikes are better than mine was (a model that now costs $500, upgraded, at WalMart). Cheap, heavy steel (euphemistically called “high tensile steel”) frames and wheels have often been replaced by aluminum, and you might even find temperamental caliper brakes replaced by temperamental disc brakes.

Otherwise, it’s the same experience. To benefit from many of the improvements in bikes over the last 40 years, many of which are from sophisticated manufacturing of frames and components, you’ll need to increase budget enough to cover those elements.

What’s in a frame?

In a word, tubes. Your frame is an interconnected set of tubes in a geometry that hopefully has been tested for ride quality, so you don’t get a hard (and sore) ride. And in a higher quality bike, each tube is specially rolled to be thinner in the middle, saving precious ounces, while retaining critical strength at joints.

A double-butted frame with a strong, lightweight alloy can be nearly 8 lbs lighter–like not having to carry a gallon of milk everywhere.

This is why my local bike shop at some point tried to stop my youthful obsession with trying to put ever-higher quality components on a lower quality frame. The frame is at the center of everything, and worthy of some investment. 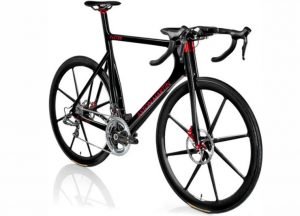 My bike shop began making decreasingly subtle comparisons between Mercedes/Ferrari quality and… what I was riding. But I wasn’t in the high-end sports car market (although an Aston Martin $37,500 bike sure looks fun for short rides).

With a CHANGE road frame or MTB frame, you’re making a $750 investment in a double-butted 7005 aluminum-zinc alloy, folding frame that will get you out more often (throw it in the trunk and go on an adventure), keep your components safer (store it in the living room) and give you more flexibility (throw it in someone else’s trunk if your plans change). Everything else on the complete bikes is the value of components.

What’s in a component?

Two amazing developments have happened in the component area over recent decades: groupsets and materials science.

A groupset is basically the concept that a drive train with all the parts designed to work well together will outperform a piecemeal approach. Precise, millimeter-tolerances can make the difference between a clean shift and a frustrating grind.

What do you get for a $470 group set? Reliable shifting at your fingertips.

A bike without a drive train groupset won’t highlight that absence. At most, they’ll just list a single component and hope that’s enough–Shimano rear derailleur! But unless it’s designed to work with the front derailleur, you’ll be doing a lot of adjusting on rides. In quality bikes, you’ll see the same model name (Shimano Claris, Acera, Deore, XT, etc) across different components.

Materials science is about the constant trade-off between cost and performance, bringing in an expensive new technology and perfecting the design and alloys until it can make its way down into bikes for the rest of us. Aluminum alloys and occasionally carbon fiber are now appearing in stems, forks, wheels, seat posts, and even the seats themselves. Flatbike carries a ruggedized hybrid with a carbon fork, and soon will have a one-ounce carbon fiber water bottle holder. 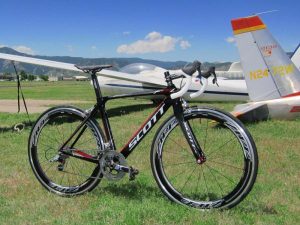 Even if you don’t buy a $12,000 bike, you benefit from the purchase. Those owners are buying the cost of aerospace technology down to market-acceptable levels that the rest of us pay.

Where does it end? 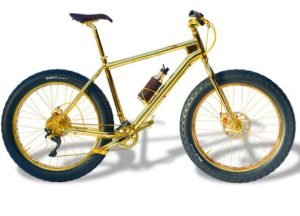 Hopefully not with this. The blinged-out House O Gold 24K bike is just a million-dollar investment in a heavy bike. But many bike shops have a $12,000 bike…

Women’s Cycling Canada has perhaps the best summary on the $12,000 bike phenomenon:

A bicycle’s final price can go from “hefty” to “stratospheric” with the addition or substitution of a few key components. Carbon wheels can easily add $2,000 to an already perfectly fine bike, and electronic shifting components can add $2,000 more. Other parts that been built out of aluminum for years are also offered now in carbon fiber, and it’s not hard to spend an extra $500 to $1,000 on a carbon stem, handlebar, and seat post.

Ultimately, we have three suggestions for a responsible quality bike purchase: 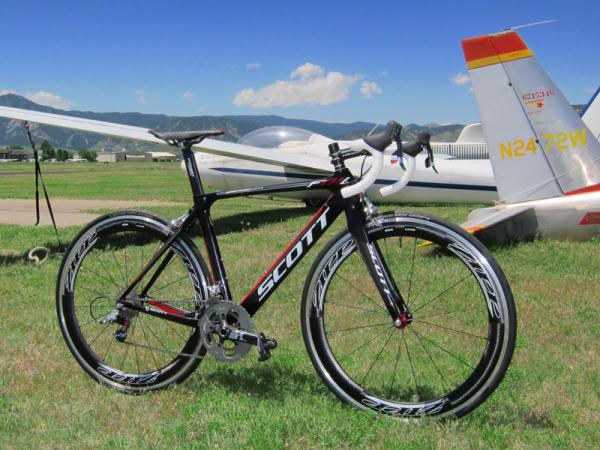