Awkward ways to carry bikes outside your car

It’s pretty simple, really. When you drive around with your bike on the outside of your car, stuff happens to your bike. Maybe even to your car.

I can speak to this personally, at least twice.

Life with a trunk rack.

Back in college, the most common type of bike rack was the low-tech, strap-on-the-trunk bike carrier. You fill your trunk, add the bikes, remember that you forgot to pack something, remove the bikes, put the bikes back on… it gets old fast. 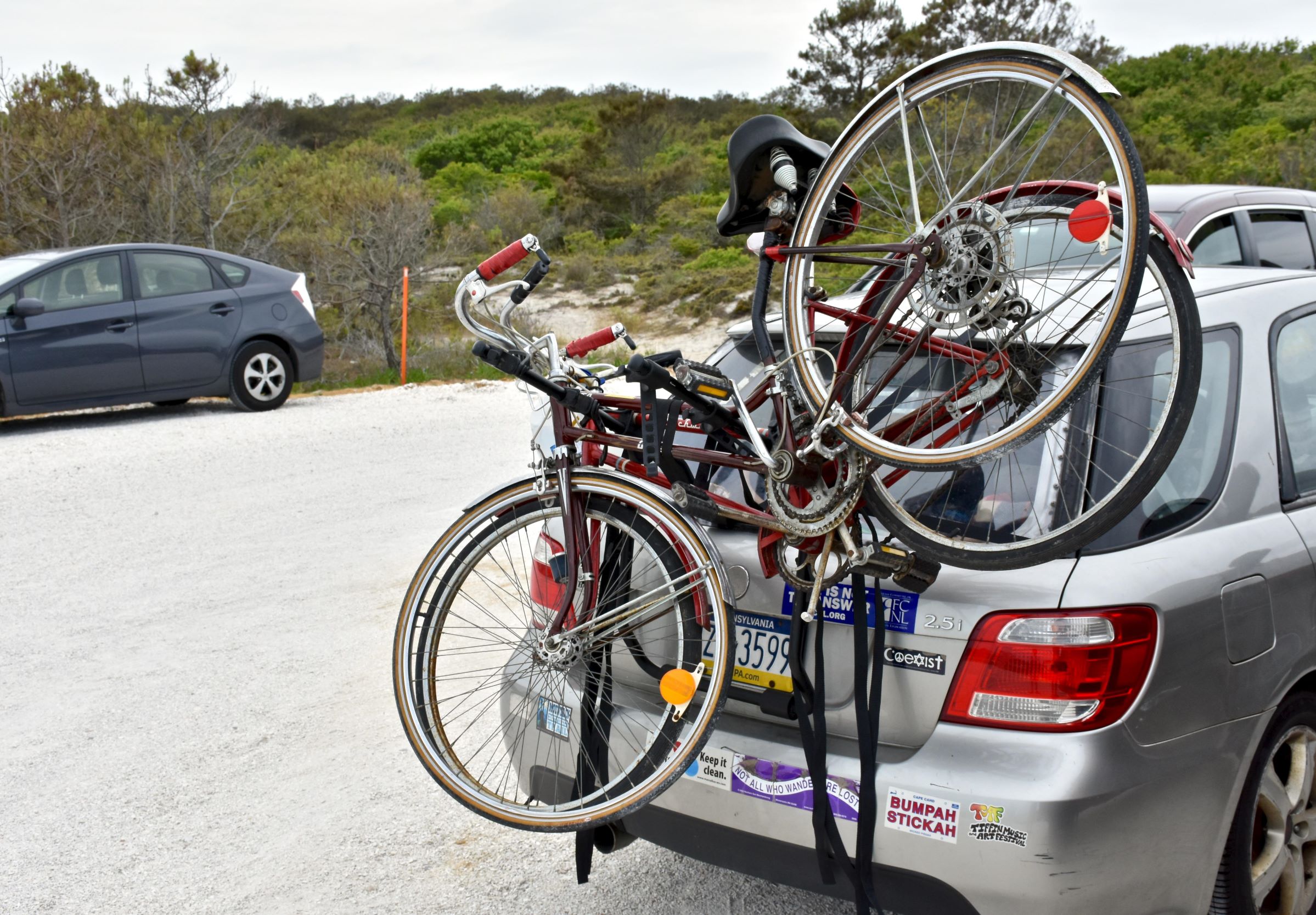 If race car spoilers are popular to make sports cars look fast, then something like this that resembles a drag-car parachute should be super spiffy.

But there’s a hidden issue that my roommate and I discovered–shock absorbers.  When you load up the back of the car for a big move, the back end of the car sags. The bike wheels get closer to the ground. One speed bump and your bike wheels hit sideways and bend. I am happy to report that my bending aluminum wheel caused absolutely no damage to Chris’ bike rack or car.

(And in a bizarre twist–literally–a nearby physics student saw my pretzeled wheel, made a quick assessment about reversing the transition, applied quick force in four places, and untwisted the wheel with a snap.)

If my bike had rugged wheels like this, that action wouldn’t have been needed… 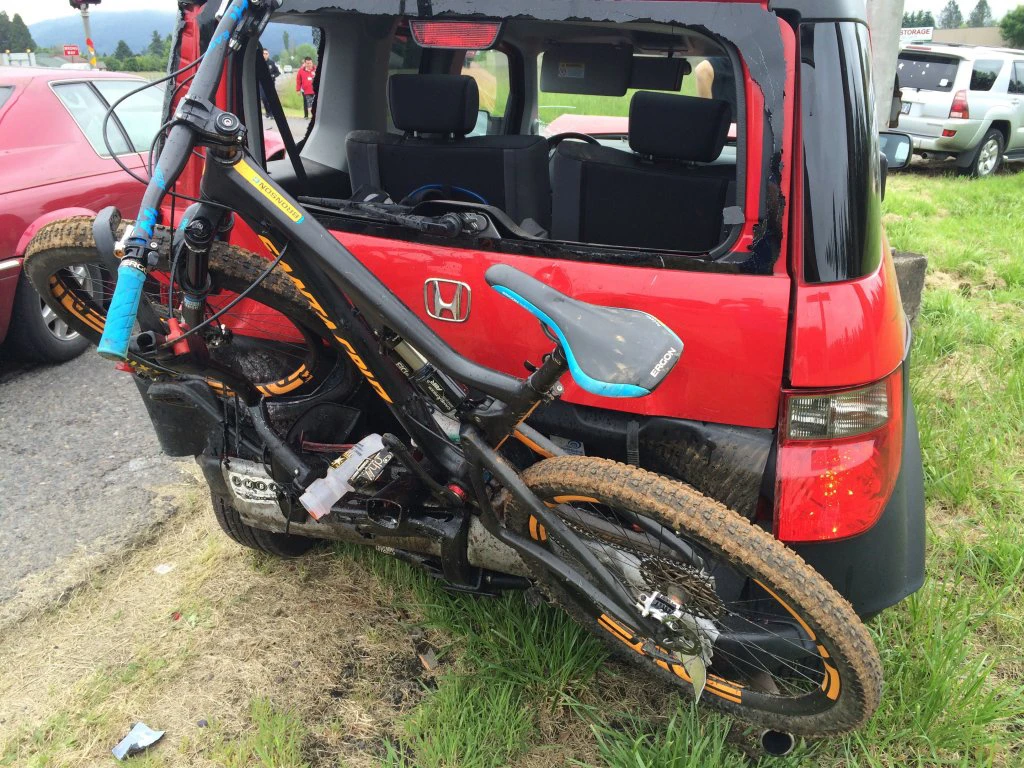 Well, at least that pricey bike is OK! All that got damaged was the bike transportation.

Life with a roof rack.

Roof racks are away from the busy trunk area and the furthest you can get from the ground, so those pesky trunk rack problems disappear. You’re left with the issue of lifting your bike over your shoulders, cleanly depositing it in the trough on top of your car or truck, and locking it securely with one free hand.  The fun is just beginning… 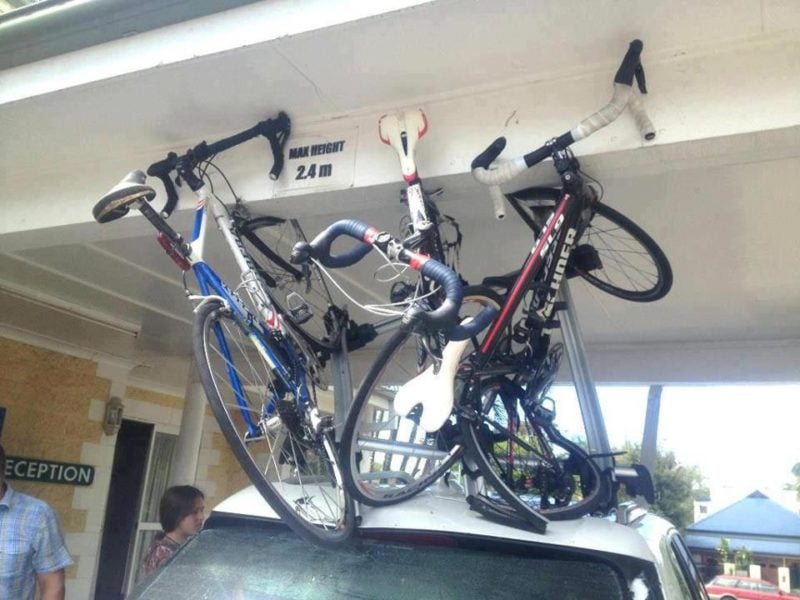 HIGH RACK. LOW ROOF. From CycleChat.net: “I have ancient and cheap roof-mounted Thule carriers for three bicycles and in over a decade have not had a single issue with them – other than driving under the height-restriction bar on a MacDonalds Drive-Thru. (That was user error – as in choosing to go to Macs).”

My wife had a clearer sense of clearance risk, always hiding the garage door opener as we left the driveway. I preferred to use my infallible memory–until the day I heard a prior roommate’s business ad on the radio as I approached the house, focused on that exciting news instead, and promptly drove into the gutter over the garage.

That was the day I started fantasizing about full-size bikes that easily fit INSIDE any vehicle. But first, what about the other common options?

Life with a hitch-mounted carrier.

Here’s an idea. Instead of mounting a bike rack on the hatch door, where you have to lift everything to get into your vehicle, how about mounting it at the bottom, for maximum inconvenience?

There are ways around this. Some systems have hinges to swing to the side or swing down to make the assembly less in the way. 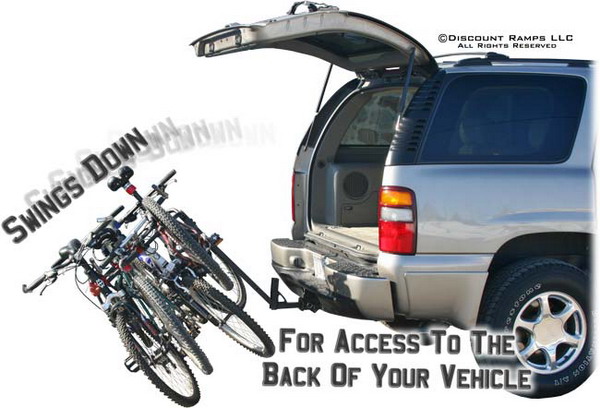 Has anyone done the clearance math on this? And why does this remind me of a memorably deformed bike wheel back in college?

Ultimately, these are the small issues with hitch mounted racks. A bigger issue is that you need a trailer hitch. And if only one car has the hitch, then nobody else in the family can take bikes out for a ride someplace safe. It limits you. 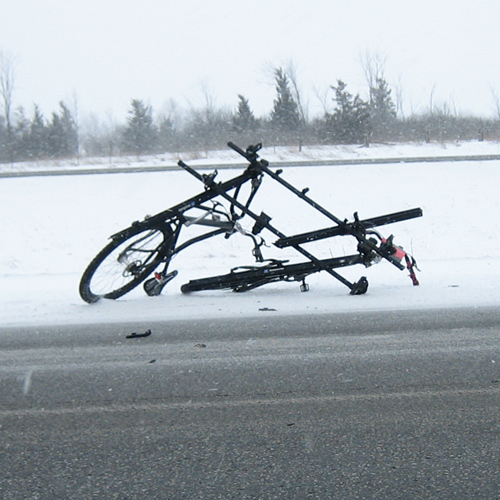 Do it yourself solutions.

Of course, you aren’t limited by what others do. It’s a free country… 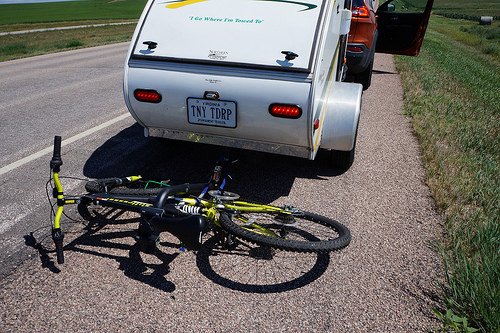 The trailer-trailer hitch-mount. At least it’s out of the way of the car… 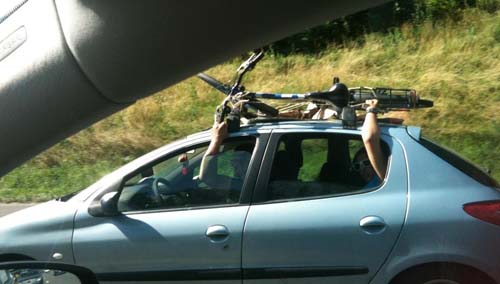 Or something I often see on the road… The RV Dangle–when you care enough to do the very least. 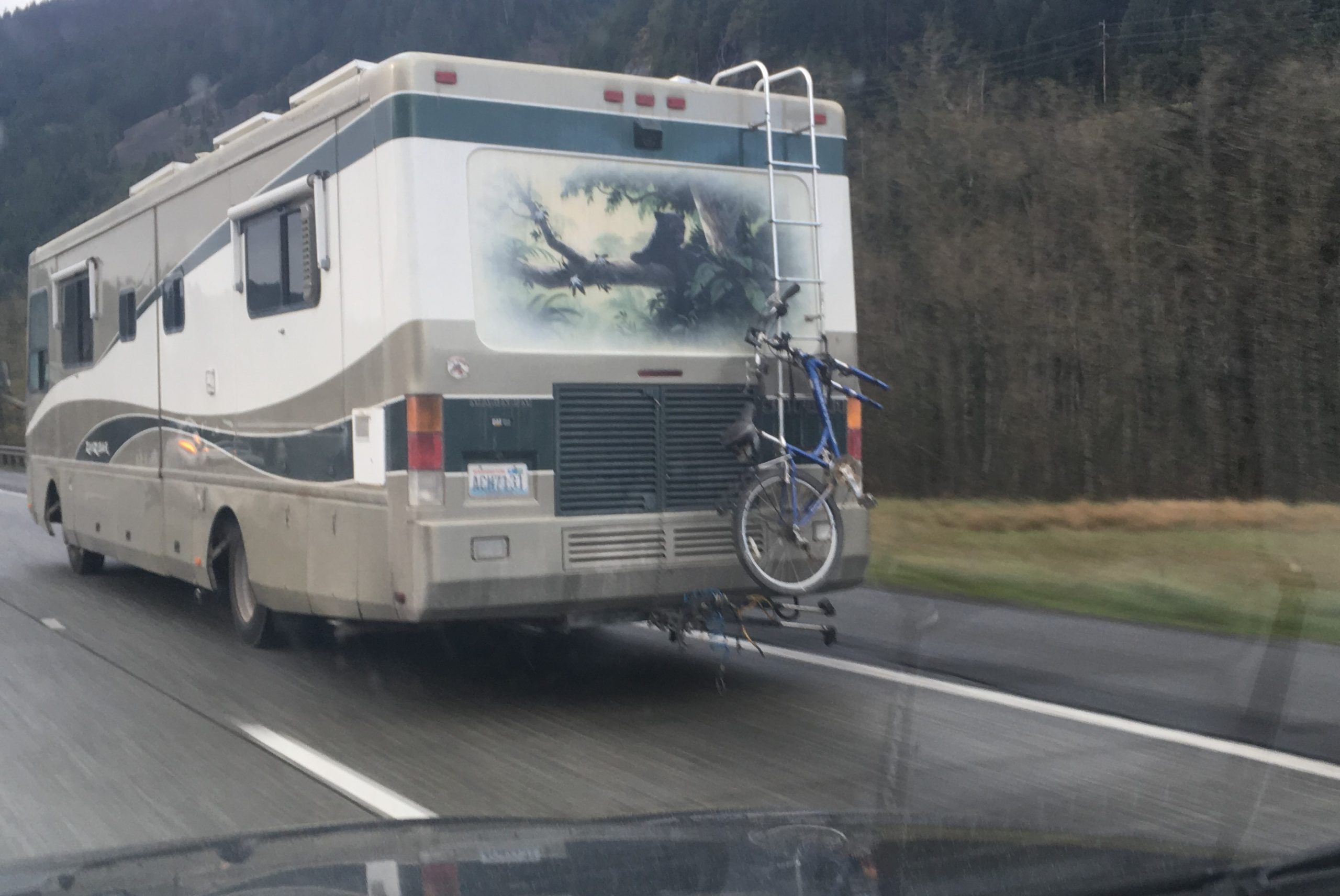 “Has anyone seen our front wheel? Or our other bike?”

Here’s a question. Suppose the RVers in the photo above didn’t actually lose their front wheel. Maybe they stored it inside because you can do that with a wheel. So if the whole bike folded in half to about wheel size, what would they do with that? 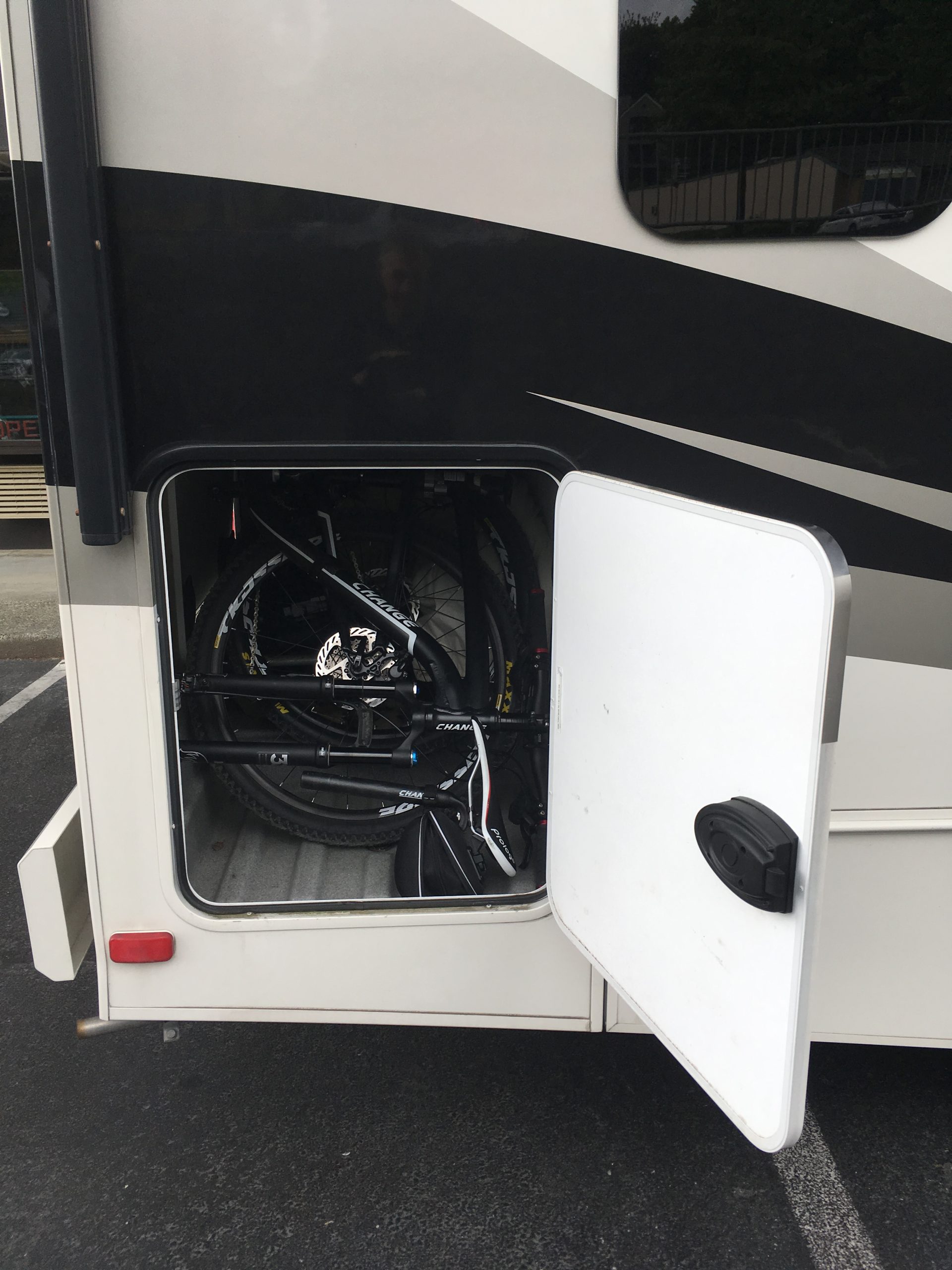 Yep, that’s a real, full-size MTB, with high-end FOX 32 air shocks, folded into a compartment smaller than the trunk of a Volkswagon Jetta. 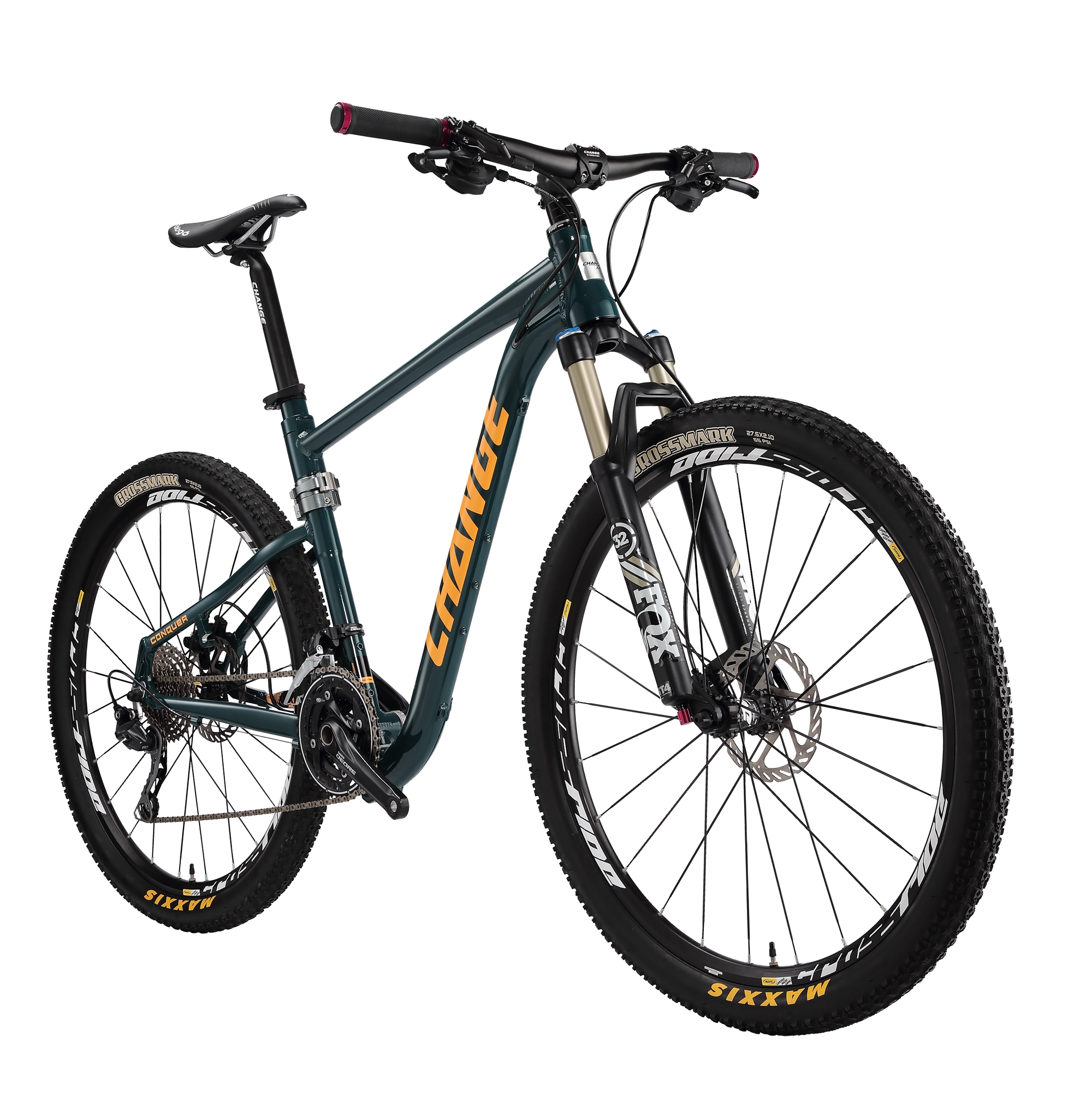 Basically, it’s the earlier model of this bike, before we went to internal cabling and colors other than black.

Think about the implications of this for a moment. When you don’t attach a bike to the outside of your car and then drive around that way in traffic, this happens:

What you have left is pure biking freedom. 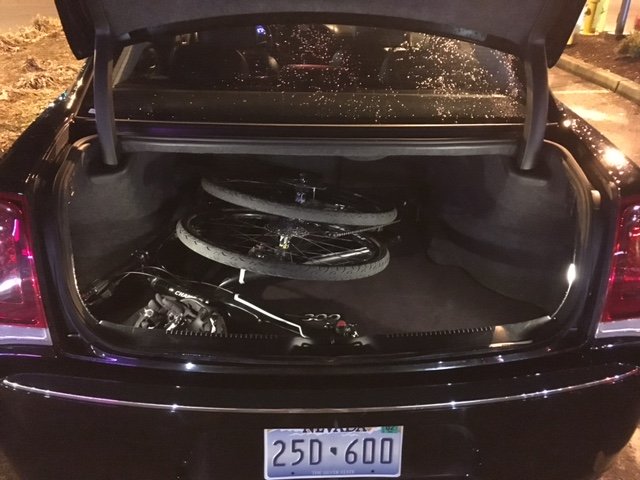 This is real freedom. I rode my bike here, rented a sedan, and drove away with my bike folded in the trunk. You can too. (But get your own bike.)

So…now that you have a choice, would you rather balance your bike on the outside of your car, or get a full-size fold-away bike? Which bike is right for you? (You can see it fold there, too.)

6 responses to “Awkward ways to carry bikes outside your car” 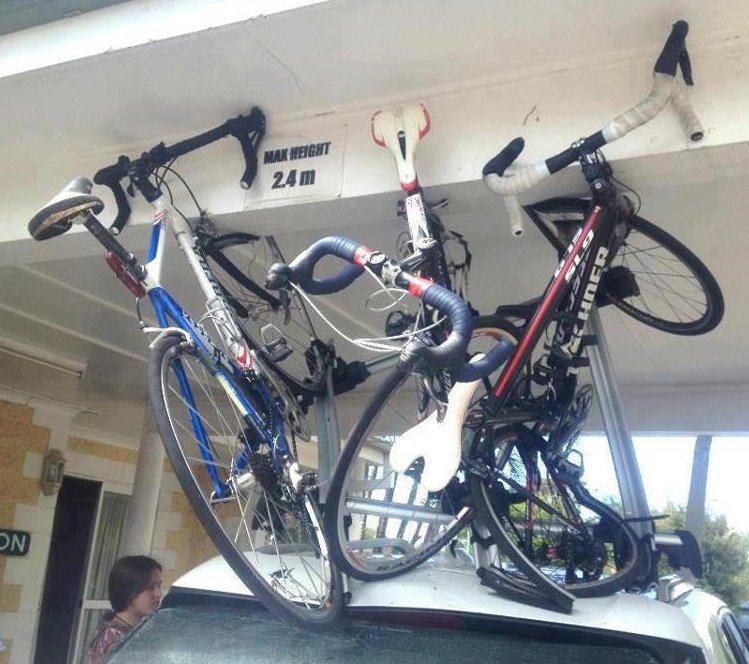