Have bike, will travel 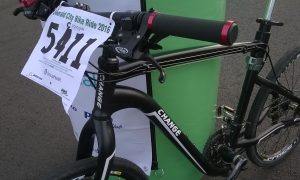 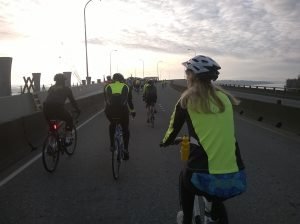 This past Sunday, thanks to Cascade Bike Club, Kathy and I took an early-morning bike ride, with thousands of other participants, on the longest floating bridge in the world. For her, it was a great opportunity to try out my new modifications to her CHANGE bike for a more relaxed, upright riding style—often called a “Mom bike” in Europe. For me, it was a chance to remind myself how the rest of the world not on a CHANGE bike experiences cycling. 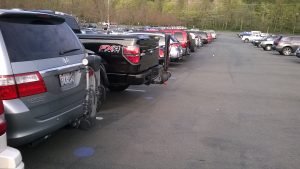 The event parking lot was a prime example of this. We were surrounded by cycles and cyclists of all types and fitness levels. But we were also surrounded by SUVs, pickup trucks, and station wagons, because that’s what you usually need to carry a bike. And lots of hitch-mounted back bike racks, which have generally replaced roof racks except on low cars.

We showed up in a Nissan Leaf with both bikes inside. One of them had even recently been modified to be taller, and still fit safely inside.

The contrast with those near us could not have been more obvious. 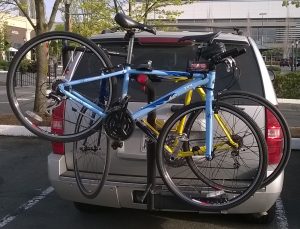 How people usually carry two bikes… non-aerodynamic, in the wind and rain and accessible to anyone. Keep looking in the mirror! 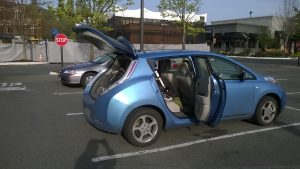 How CHANGE bike owners carry two bikes. (We had to leave the doors open or you wouldn’t see the bikes at all.)

The ride itself was amazing, crossing Lake Washington on a floating concrete bridge designed not only for 50% more cars but embracing the idea of an active walking, cycling lifestyle, with a dedicated, walled-off lane just for pedestrians and bikers. Not that we needed the lane; with thousands of riders to accommodate, we owned the entire bridge for the morning, and any car drivers were warned about bike riders! How cool is that? Our event was literally living proof of the impact that a community can have when it decides that getting outside is important. 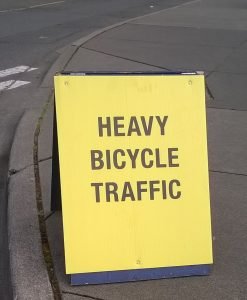 One final observation was a strange one, but logical once you think about it. In just an eight-mile ride, we saw eight places where people had to stop and repair bikes! This wasn’t about glass or thorns or nasty pavement, but about not riding all Winter and then not having a fully operational bike in the Spring. It’s about leaving bikes outside in bad weather, not wanting to deal with the hassle of attaching bike racks…and all the other little obstacles to carefree biking that separate a bike owner from a CHANGE bike owner.

In all, it was an eye-opening day. And while others ended there, taking their bike rack assemblies home for unmounting, we didn’t have to. Already out and about with our bikes securely locked in the car, we hung out in the city afterwards and ate popcorn and watched 3D IMAX movies.

Have CHANGE bike, will travel!