Three times in recent weeks, I’ve gotten questions about weight limits for CHANGE bikes, because folding bikes typically have smaller wheels and frames with built-in stress points. The wheels have to go around faster to go the same distance, they’re working harder, and so is the frame, so every bit of weight matters on a standard folding bike.

The best way to see the difference is to look at a standard bicycle the way engineers do, as a set of forces. Your weight is a force, and the resistance of the ground is a force; both put stresses on the frame. Here are two stress cases, where more stress on the frame shows in red: 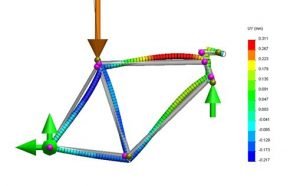 This stress case is about rider weight. Look at which bar is red. 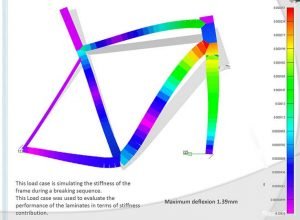 This stress case is about a rider hitting something in the road with the front wheel. The force travels up the fork. Look what part of the frame turns red.

A big part of the reliability of a standard bike frame is the triangle design. No matter where a force comes from, there’s always a supporting, resisting tension on a nearby bar. Now look at a common folding bike design. 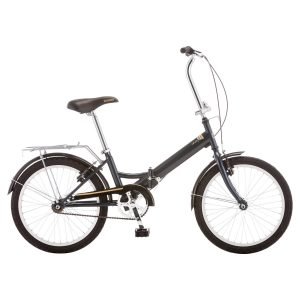 All forces are concentrated in a single, highly stressed bar. And just for good measure, cut it in half and add a latched hinge, to make it super-stressed!

As a result, folding bikes come with these weight limits:

Nearly all are in the 220-250 pound range. What if that 240-pound rider (or even a lighter rider) hits a speed bump or a pothole like in the stress test above? The two bikes outside of that weight range beef up the same design by adding more metal. Same stress points, heavier bike.

***UPDATE: We recently had the same discussion with the owner of a broken Tern Cargo bike with a stated weight limit of 350 pounds. The frame broke at–you guessed it–the latch. (Although…a failure at the hinge, or at the weld on either side of the hinge/latch unit would have the same effect of a broken top tube.)

Meanwhile, a standard, non-folding Trek frame with no special, heavy beefing up has these weight limits:

Note that urban bikes and mountain bikes are at the same weight limit. So what’s the biggest difference between the two weight categories? Racing wheels vs. thick wheels. With a standard triangle frame design, the limiting weight factor for a rider is simply whether you’re riding skinny wheels!

At Flatbike, we’re huge fans of the time-tested diamond frame, where front-wheel forces are distributed between top tube and downtube. And we’ve taken the seat-tube, right below a heavy rider, and made that entire tube the pivot for folding. 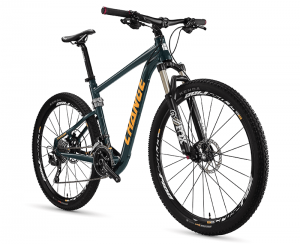 Now that’s a folding bike designed for hard use.

When there’s no weld-hinge-latch-weld series of failure points, you can handle a lot more weight. It doesn’t matter whether that extra weight is from a Lycra-clad mountain biker landing a jump, or large commercial trucker doing a convenience-store run. Force is force, and a bike like the CHANGE 812 folding mountain bike is designed to handle it. 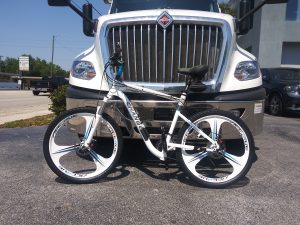 Sometimes truckers make CHANGE bikes their own with custom mods.

So what do we recommend at Flatbike for heavier riders?

First, we recognize that the classic diamond frame didn’t get there by accident. It’s the result of 100+ years of weight vs. strength tradeoffs, and we embrace it.

Like Trek, we steer heavier riders (260+) away from the skinny-tire road bikes. With heavier riders, the frame won’t break–it’s still ruggedness-certified–but you’ll be more susceptible to pinch flats from low-pressure tires and rim dents from potholes then the average rider. (Want a road bike anyway? Keep your tires pumped and stay away from potholes.)

For riders over 260 lbs, and we even have riders over 360 lbs, use a bike with at least 1.5″ street tires, like the CHANGE 811 rugged folding hybrid, or CHANGE 812 folding MTB. In our experience, you’ll also likely want a slightly more upright position, with raised bars and a wider seat (like Trucker Paul did in his custom mods above).

And then you’ve got a folding bike for your weight, and your riding style, but that folds in half: 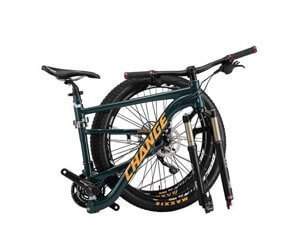 We’ve got a lot of full-size foldable bikes to choose from. Choose well, ride often, and enjoy the freedom.

11 responses to “How to bypass folding bike weight limits” 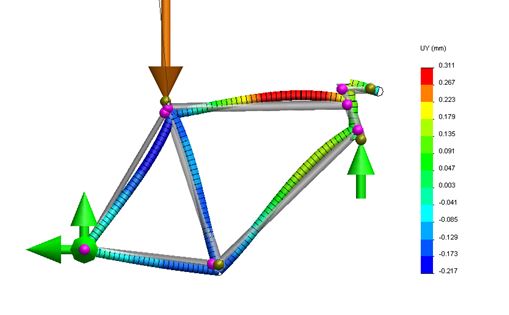