Among other things, 2020 may easily become the year that Americans rediscovered the great outdoors.

With large events canceled in most states for health reasons, and people told to refrain from gathering together in restaurants, bars, or even the workplace, we’re staying home . . . going stir-crazy . . . often using exercise bikes . . . and then heading for the parks and open spaces to breathe in fresh air and inspiration.

Greenways are a great example of that type of destination. A greenway is a corridor of land that is reserved for recreational or environmental use. And the East Coast Greenway is the granddaddy of them all. 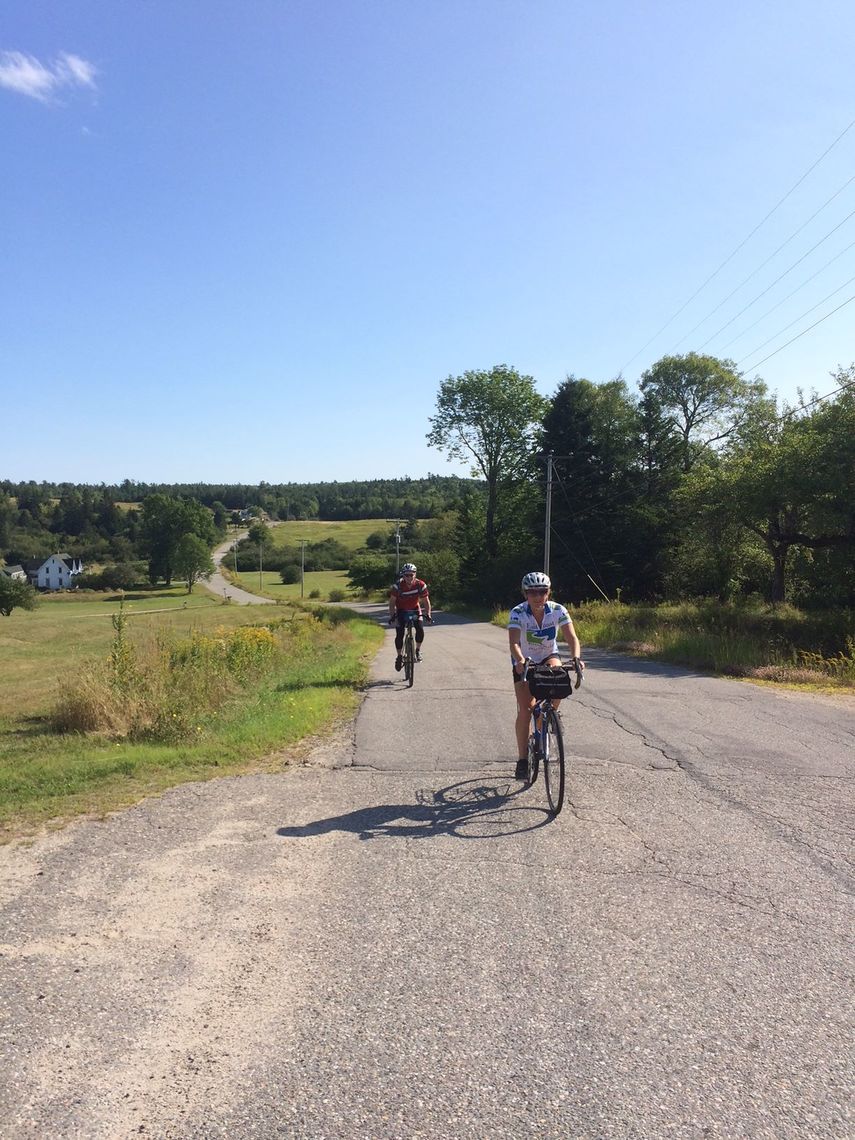 Getting fresh air (and social distancing) on the Maine portion of the East Coast Greenway. Photos: greenway.org

The East Coast Greenway connects 15 states, 450 cities and towns, and 3,000 miles of people-powered trails from Maine to Florida —the country’s longest biking and walking route.

The riding experiences you’ll encounter on this incredible journey are as varied and unique as the states themselves, each contributing a bit of their own culture and charisma to their section of the East Coast Greenway.

One marvelous aspect of this greenway is the structure of it. It’s got its own website, its own ambassadors and sponsors, and consistently presented maps that show clearly where to go and what you’re getting into. Here’s the example for Maine. 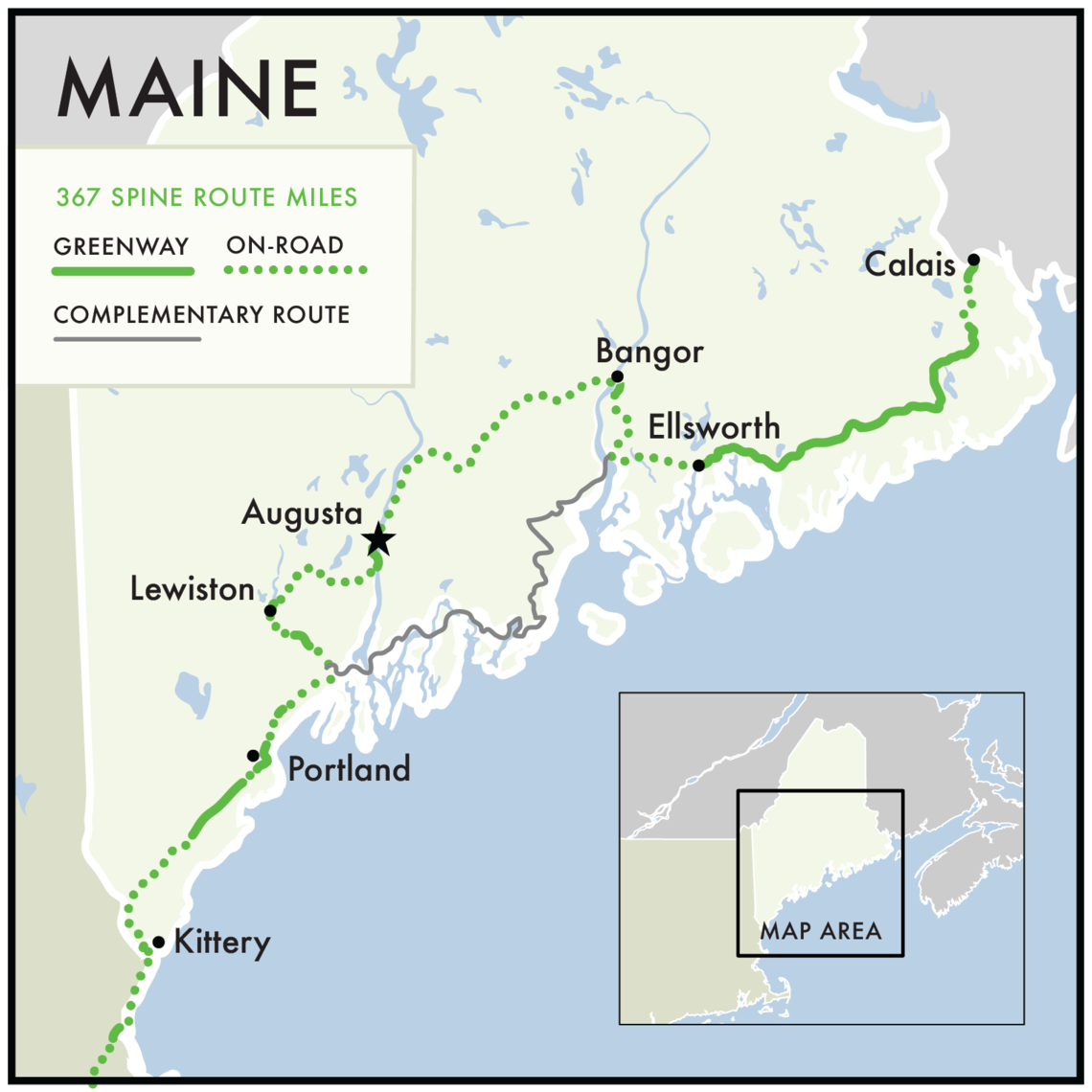 Here you can see what sections are protected off-road (125 miles of the 367-mile route), what’s on recommended low-traffic roads, and what’s available as a shortcut. All states have this same map design.

Not only that, the GPS-adept among us can download .gpx files for use with map.me and other route-tracking software. Is there any way these folks could have made the travel planning easier?

Without further ado, here are some brief glimpses into what you’ll experience in the 14 other states of this greenway. State links take you directly to the corresponding route-planning page.

A quick photo tour of the East Coast Greenway

New Hampshire is a state in transition. They contribute 17 miles to the bigger picture, but have an even bigger vision about what they want the New Hampshire experience to be. 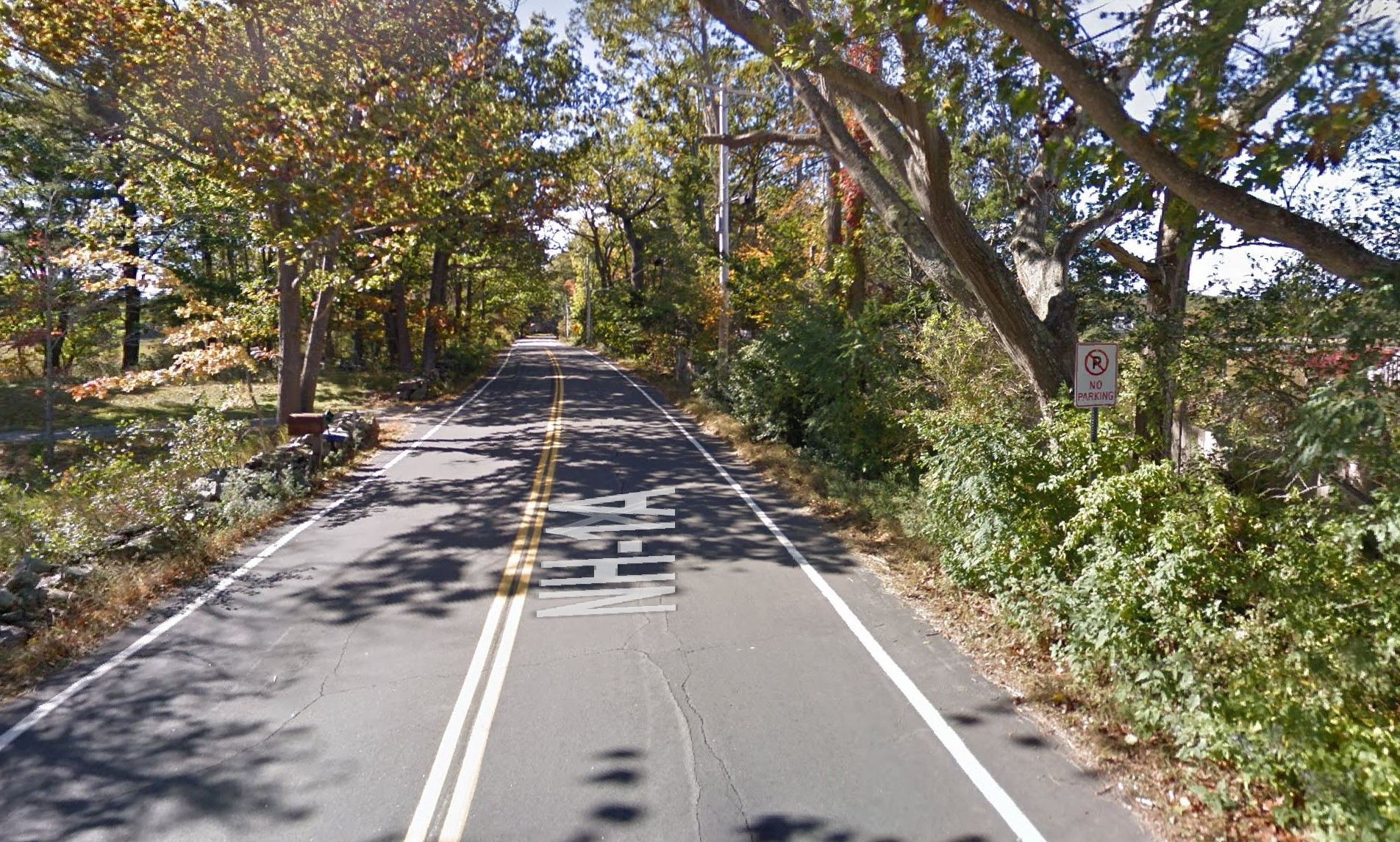 Today, the 17 mile New Hampshire segment is a scenic, yet sometimes busy road adjacent to the ocean. But in the near future … (Photo: Google Street View) 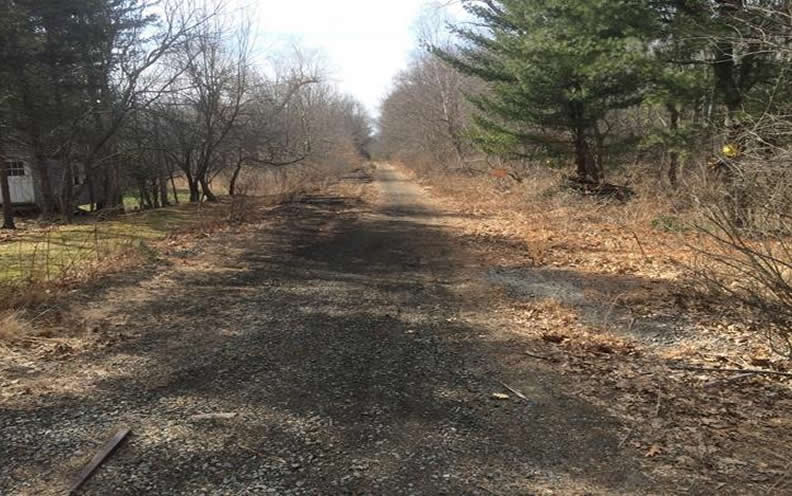 … the state will be enhancing this protected corridor with community-based development … (Photo: planportsmouth.com) 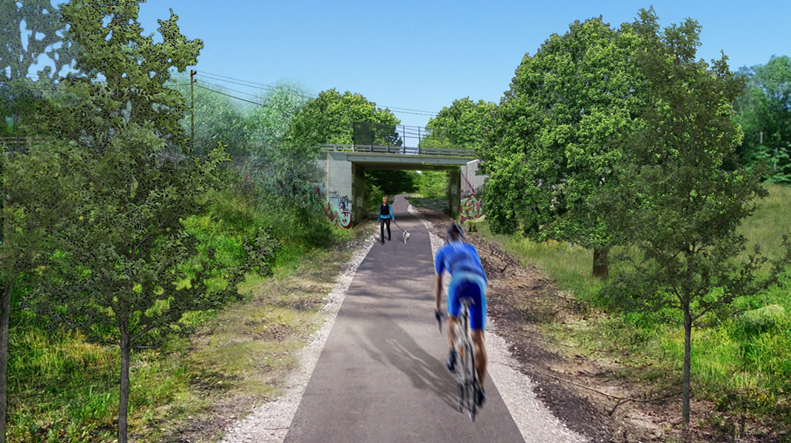 Massachusetts has a well-developed coalition contributing to the greenway, and already has 11 trails knit together for 57 off-road miles of their 138-mile East Coast Greenway spine. 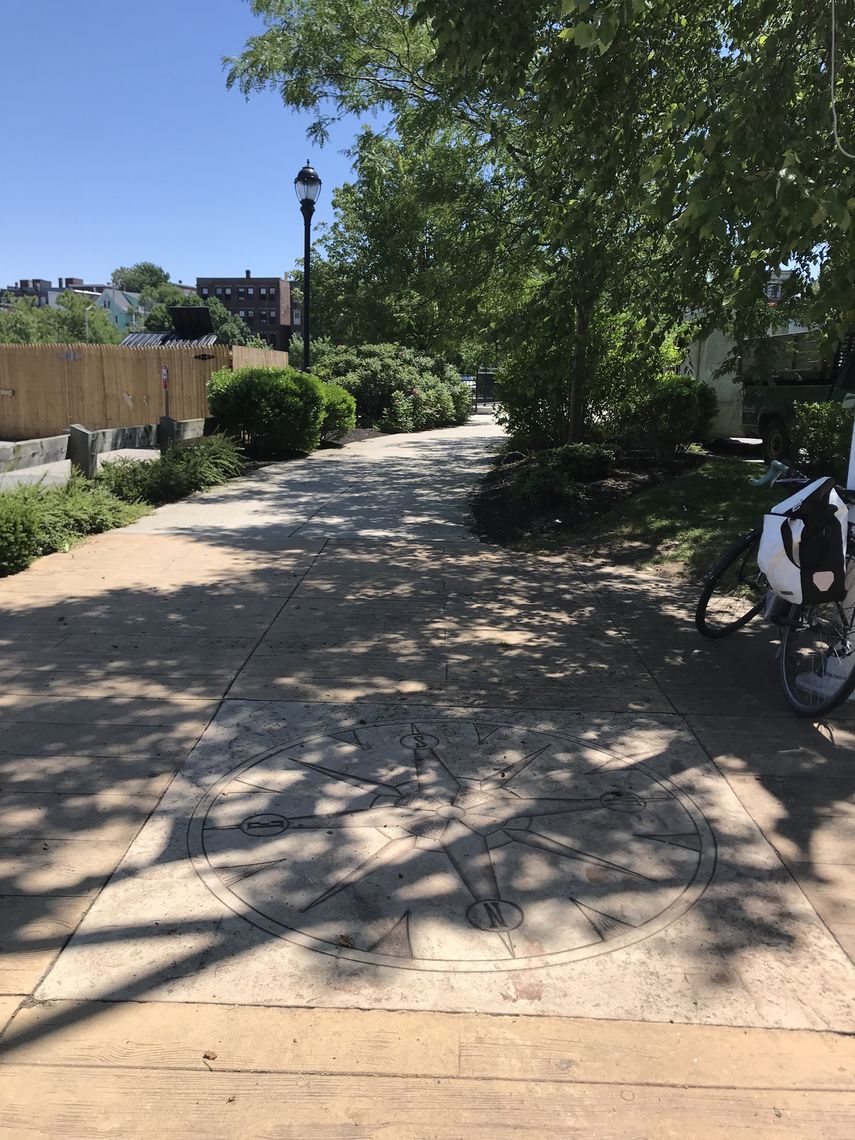 Two more off-road miles in Massachusetts were recently added as part of the Border to Boston Trail.

Rhode Island combines seven trails in their segment, managing to get 32.5 out of 48 miles as protected pathways. 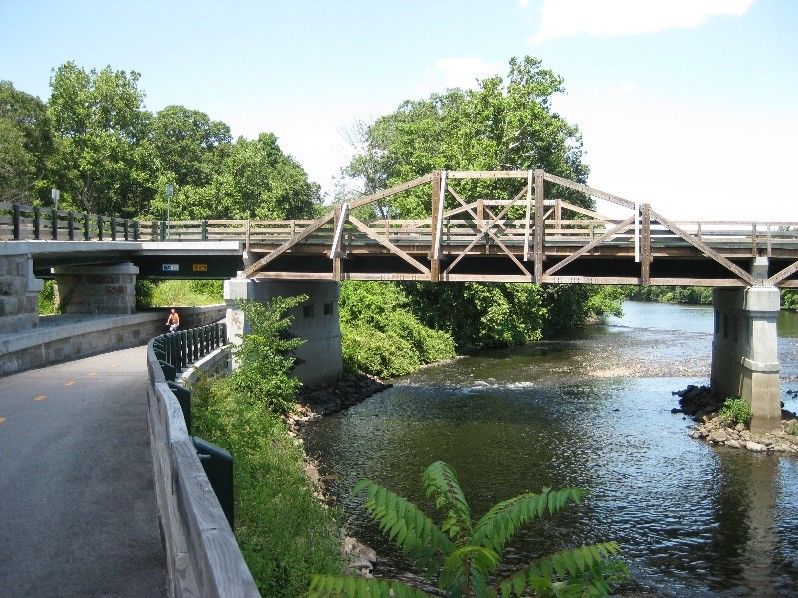 Ten of these Rhode Island miles are on the Blackstone River Bikeway.

Connecticut has knitted together a whopping 18 local trails through historic mill towns and charming communities to provide 98 protected miles of a 200-mile greenway spine. 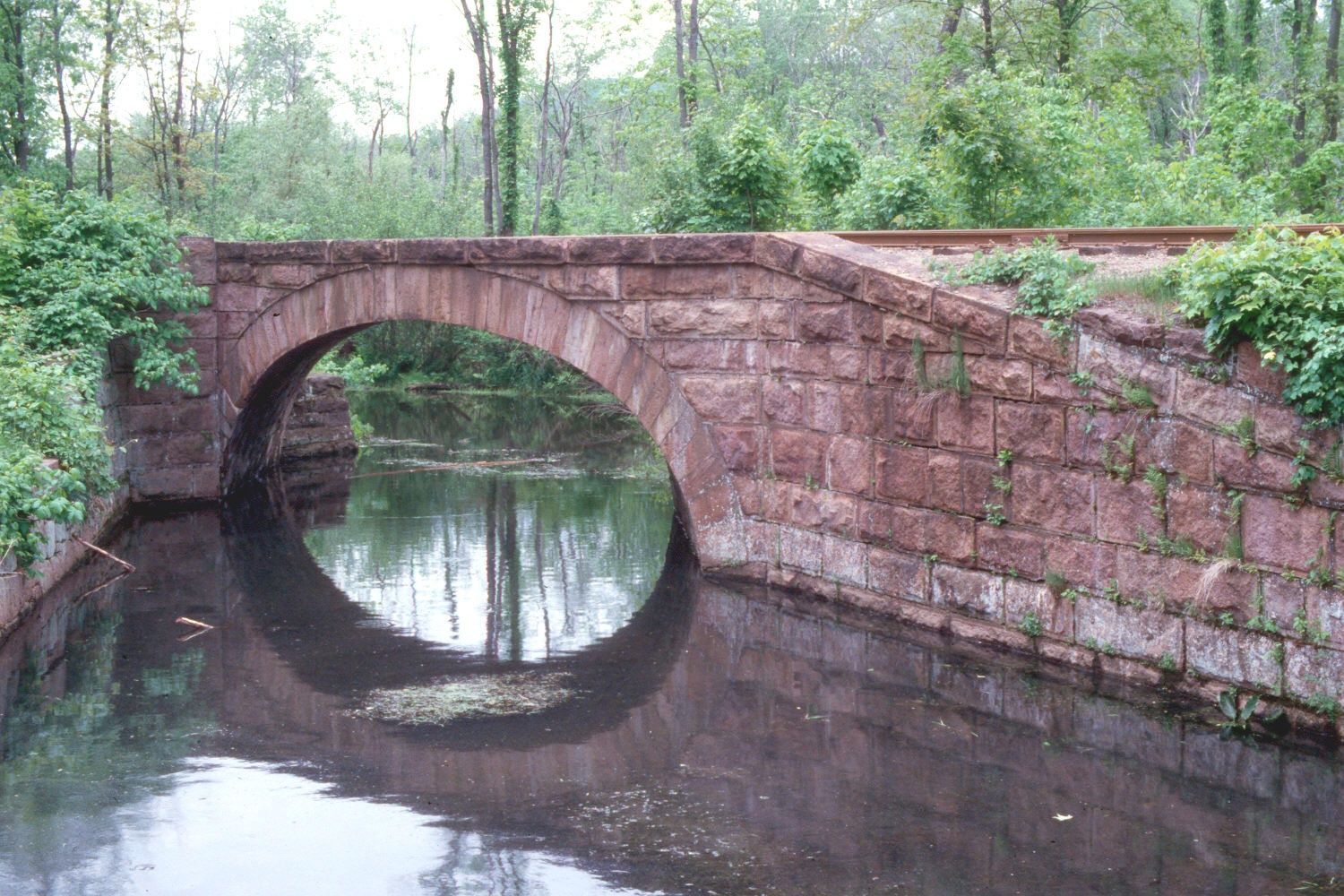 The Farmington Canal Heritage trail is popular in Connecticut for so many scenic views, it’s hard to find a representative favorite. But “Heritage” is in the name for a good reason, and this is an example of some of the history you’ll see along the trail. (Photo: bridgehunters.com, Chester Gehman)

The Greenway’s route through New York passes through one of the largest cities in the world–with 18 protected miles on a 34-mile spine. Visitors and locals often agree that traveling through New York on safe, green, recreational paths may be the best way to see Manhattan. 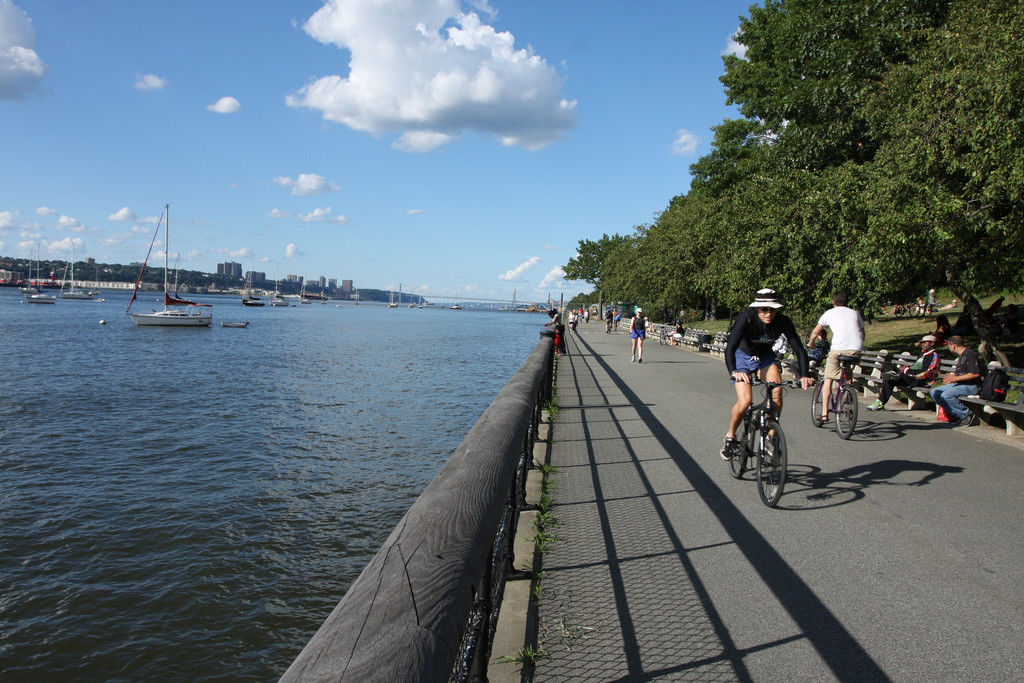 The Hudson River Greenway, one of 11 connected trails in New York’s segment.

There’s more to New Jersey than the outskirts of New York. In these 98 spine miles (54 protected), you’ll travel through the bustling urban areas of Trenton, New Brunswick, Newark, and Jersey City but also a surprising share of quiet, traffic-free paths, including the D&R Canal Towpath. 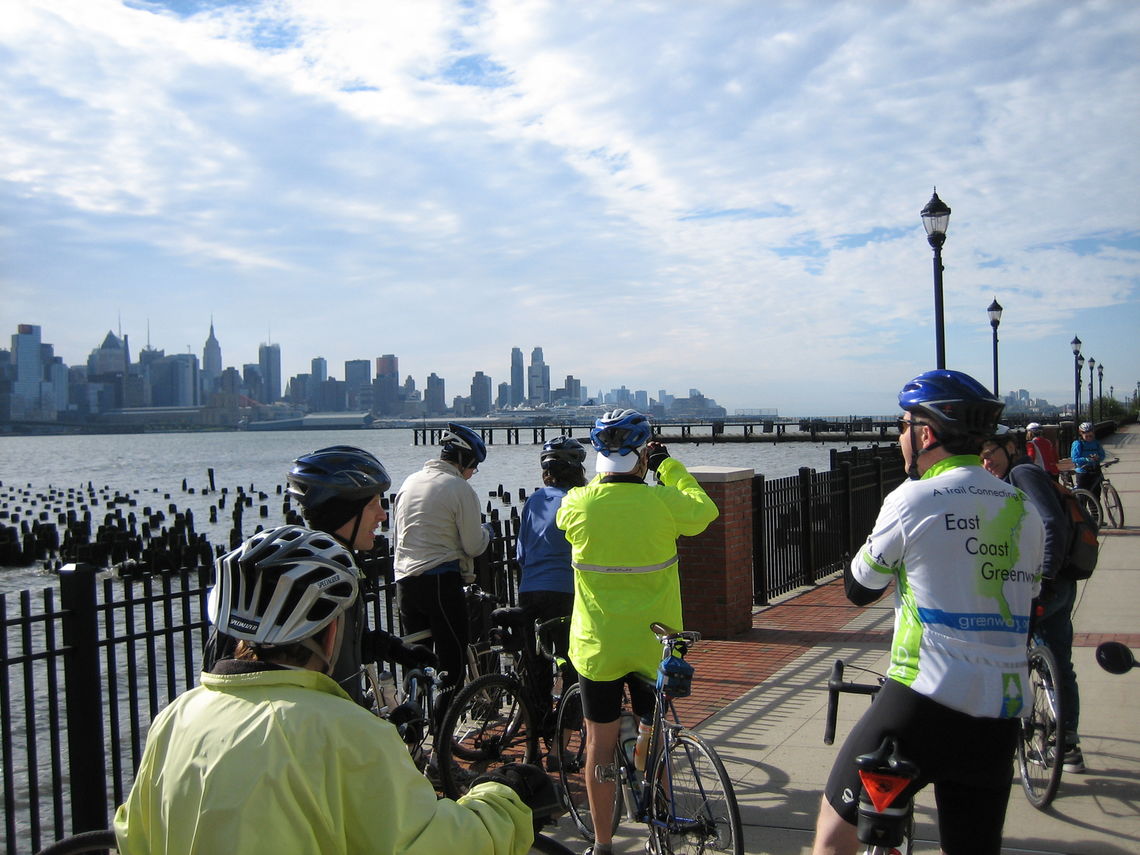 OK, it’s not social distancing, but this is definitely a great way to take in the sights while stopping frequently for a photo and a conversation.

And just like that, you’re out of the city. Sometimes. Pennsylvania has a 60-mile spine segment, 26 of which are off-road in a combination of 15 semi-separate trails, some very rural and some urban–just like Pennsylvania as a whole. The state is very much committed to more extensive integration, and an economic study has identified that completing the East Coast Greenway would carry a $3 billion (with a B!) benefit for Philadelphia alone.

Hop on the John Heinz National Wildlife Refuge Trail, and you’re suddenly a world apart from all your troubles. (Photo: alltrails.com)

Breeze along the Northern Delaware Greenway into Wilmington to the scenic Riverwalk in downtown Wilmington. Follow the Riverwalk to the DuPont Environmental Education Center on the Russell Peterson Wildlife Refuge, which marks the beginning of the beautiful Jack A. Markell Trail, opened in the fall of 2018. The trail takes you to historic New Castle by way of a boardwalk over wetlands, across the Christina River on an arched bridge just for cyclists and pedestrians, and along a mix of forest, underpasses, and a former rail corridor. 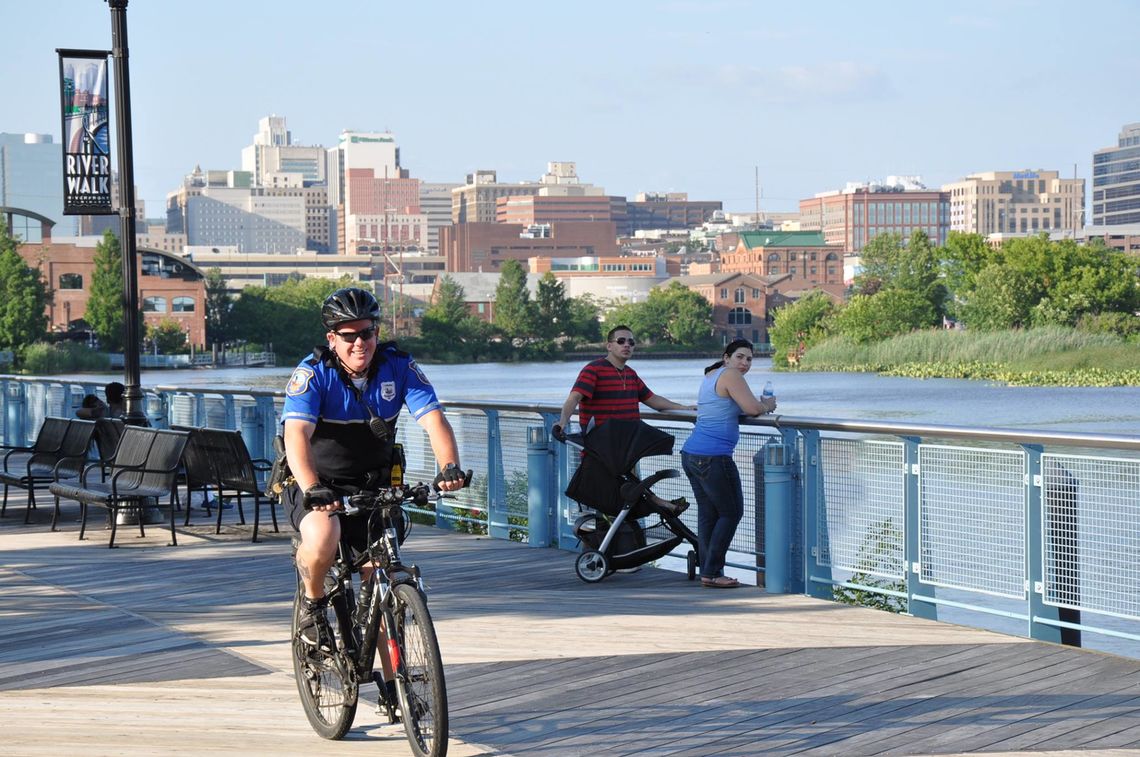 The Christina Riverwalk is one of 10 protected trails–looks like it’s really protected, thanks to cycle cops. In a 36-mile spine, 24 miles are off-road.

Greenway highlights in Maryland include the scenic Jones Falls Trail into Baltimore, the rural Torrey C. Brown trail north of Baltimore, and the B&A Trail leading delightfully to the port city of Annapolis. Of a 171-mile Greenway spine, 62 are protected. 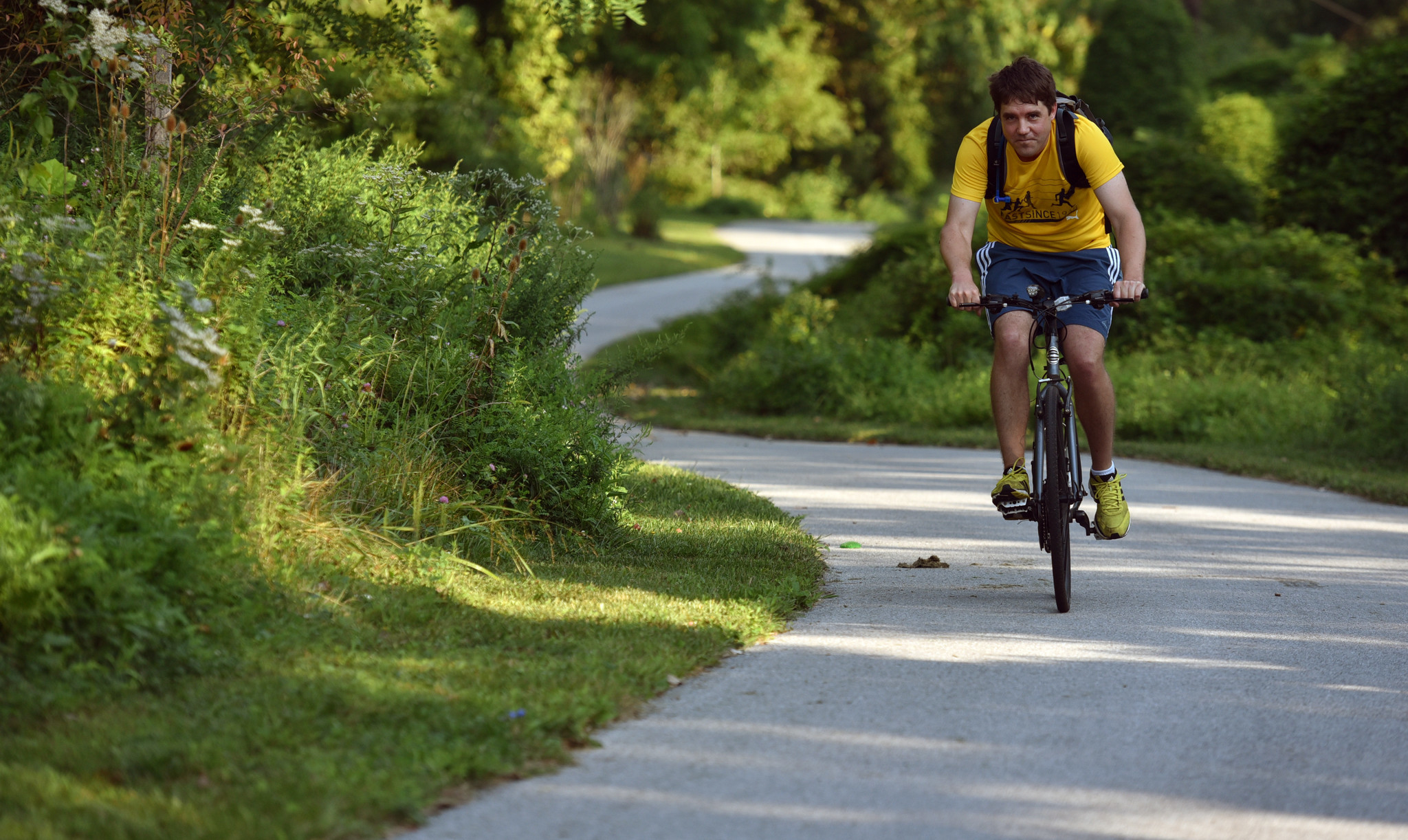 OK, so it’s not a state, but Washington DC is an important connector between Maryland and Virginia. Of its 8-mile spine, 6 are protected. The Greenway route through our nation’s capital is scenic, passing monuments on the National Mall before crossing the Potomac River to Virginia. 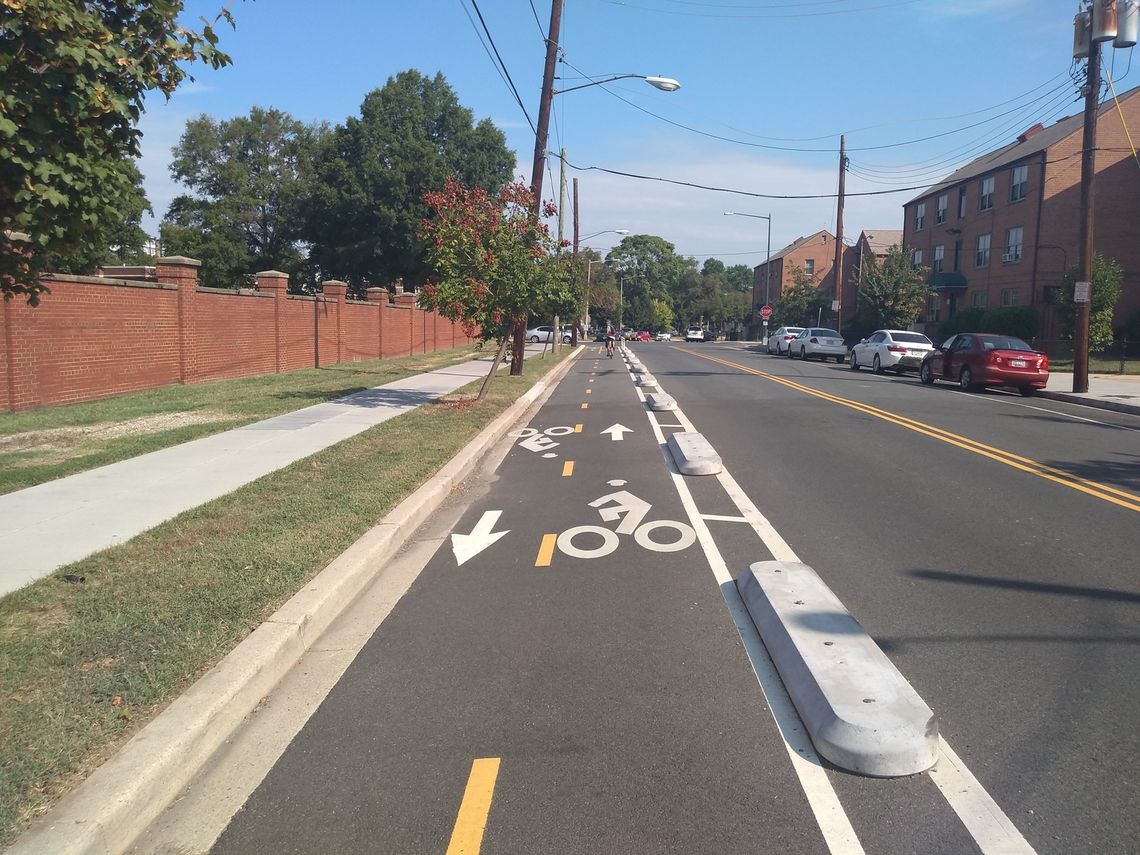 Safety doesn’t have to be fancy or expensive. By transitioning just one row of parking into truly protected, two-way bike commuting, DC has created a quick, easy way to get across town, at rush-hour or not.

In Virginia, something unusual happens. After traveling down to Richmond, using the Mount Vernon trail, among others, the Greenway splits in two; the official spine route continues directly south to North Carolina, while the other travels southeast on the Southern Historical Route through Jamestown and Williamsburg. Of the 283 spine route miles, 57 are protected. 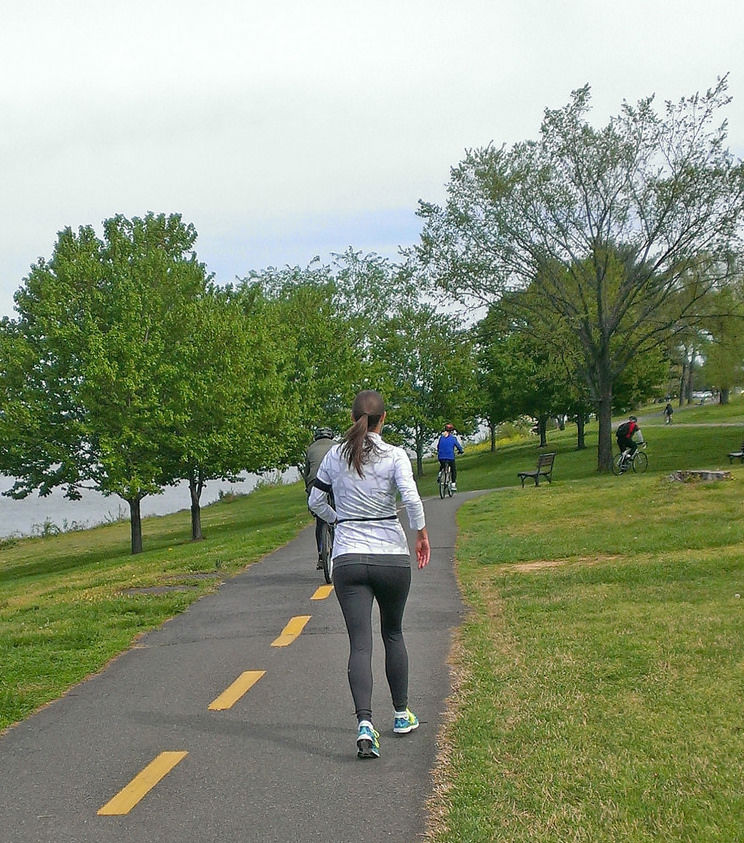 The Mount Vernon Trail is a simultaneous favorite of bikers, runners, and walkers.

North Carolina brings the split back together, but not until Wilmington. The official spine route of 365 miles (97 protected) travels directly south through Raleigh, while the other route navigates various towns along the coast. 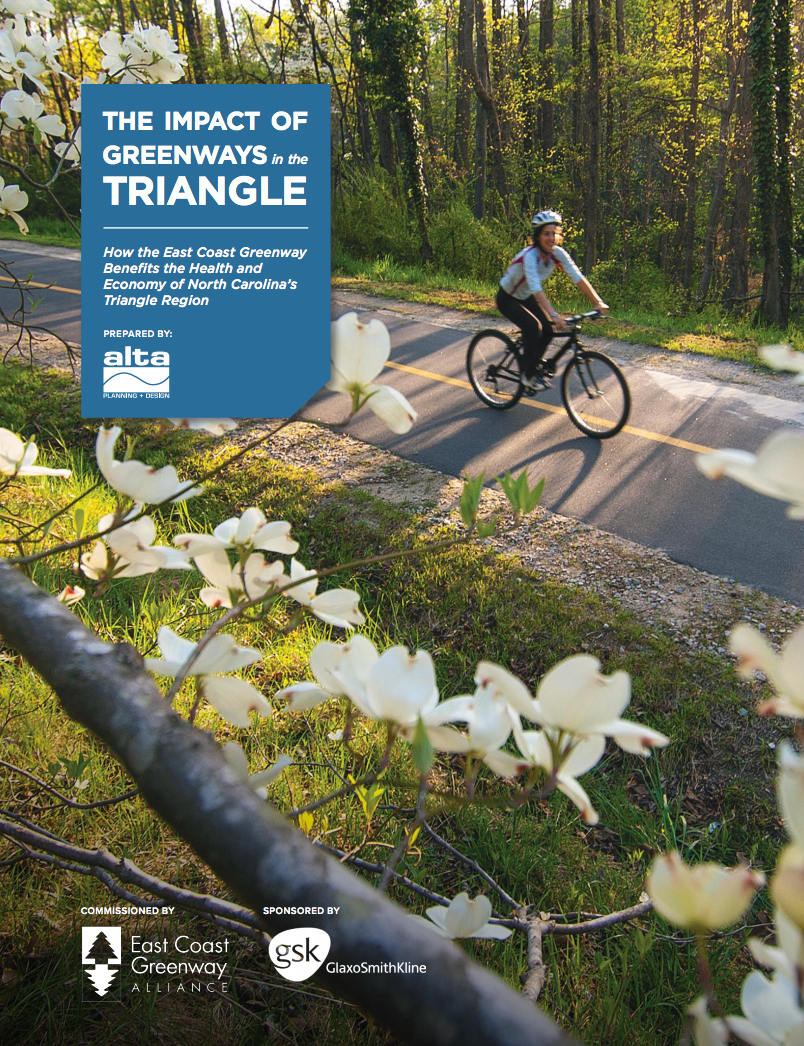 An economic impact study determined that the value of the East Coast Greenway to the Triangle area of North Carolina alone exceeds $90 million/year. 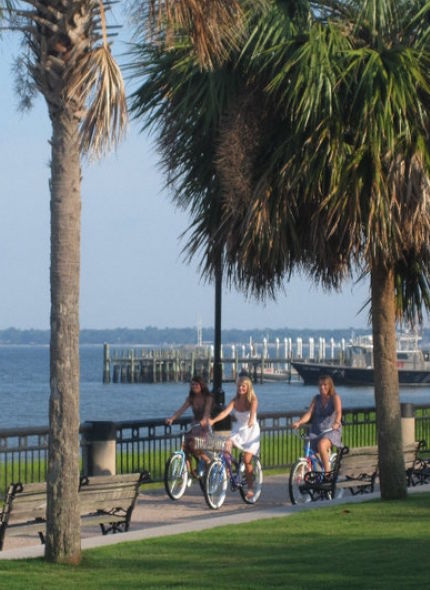 The East Bay Trail in Charleston is short, but distinctly South Carolina in its panoramas.

Georgia’s contribution to the network is …. well … aspirational at this point. Basically, it’s 10% protected trail and 90% riding in the margins of US-17 with cars speeding by. We’d love to highlight any articulated or visualized plans to improve this situation, and the intent is certainly there, but we have nothing to share so far, except for “mobile biking techniques” further in this article. 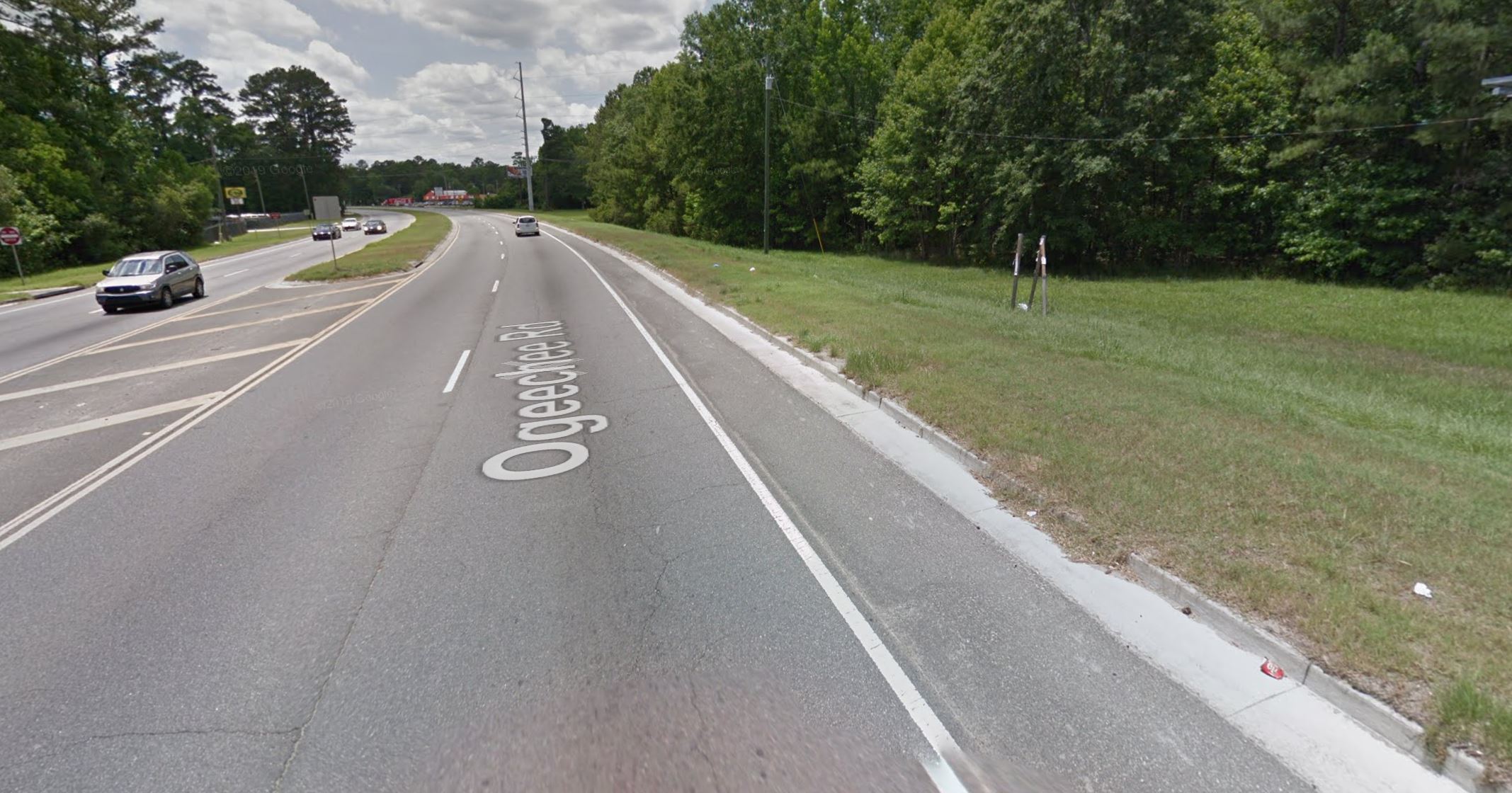 For now, in Georgia, you’re going to be cycling along the shoulder of US-17 and related high-speed roads. There’s almost no getting around it with most bikes.

And just like that, we’re in Florida, which contributes a whopping 22 trails to the Greenway, for a total protected miles of 251 in a spine of 595 miles.

The Greenway enters the state at Fernandina Beach, then makes its way through 13 counties before reaching Key West, the southernmost mainland point of the United States. Travel is largely along the coast through seaside villages, America’s earliest historic sites, vast nature preserves, and major cities that include Jacksonville and Miami. 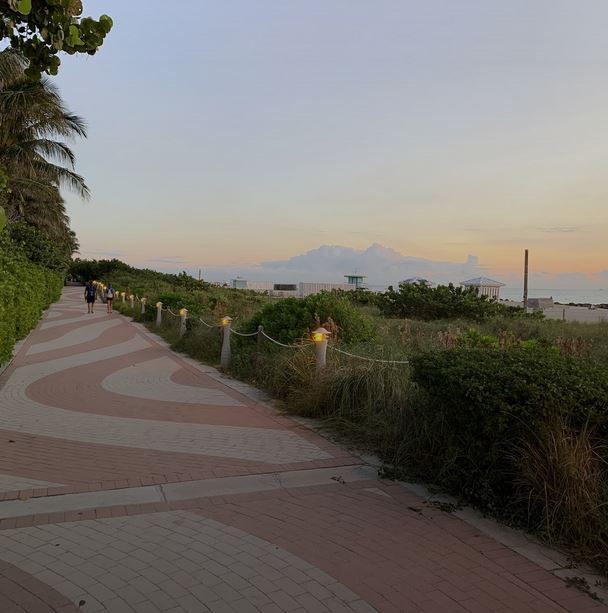 The Atlantic Greenway in Miami is a beautiful new addition to the East Coast Greenway.

Mobile biking: How do we do this?

At a certain point of “I want to do this!” brainstorming, three logistical obstacles come to mind:

However you do this, your bike will need to travel, and so will you, either by car or plane. Here are four ways to travel with a bike: 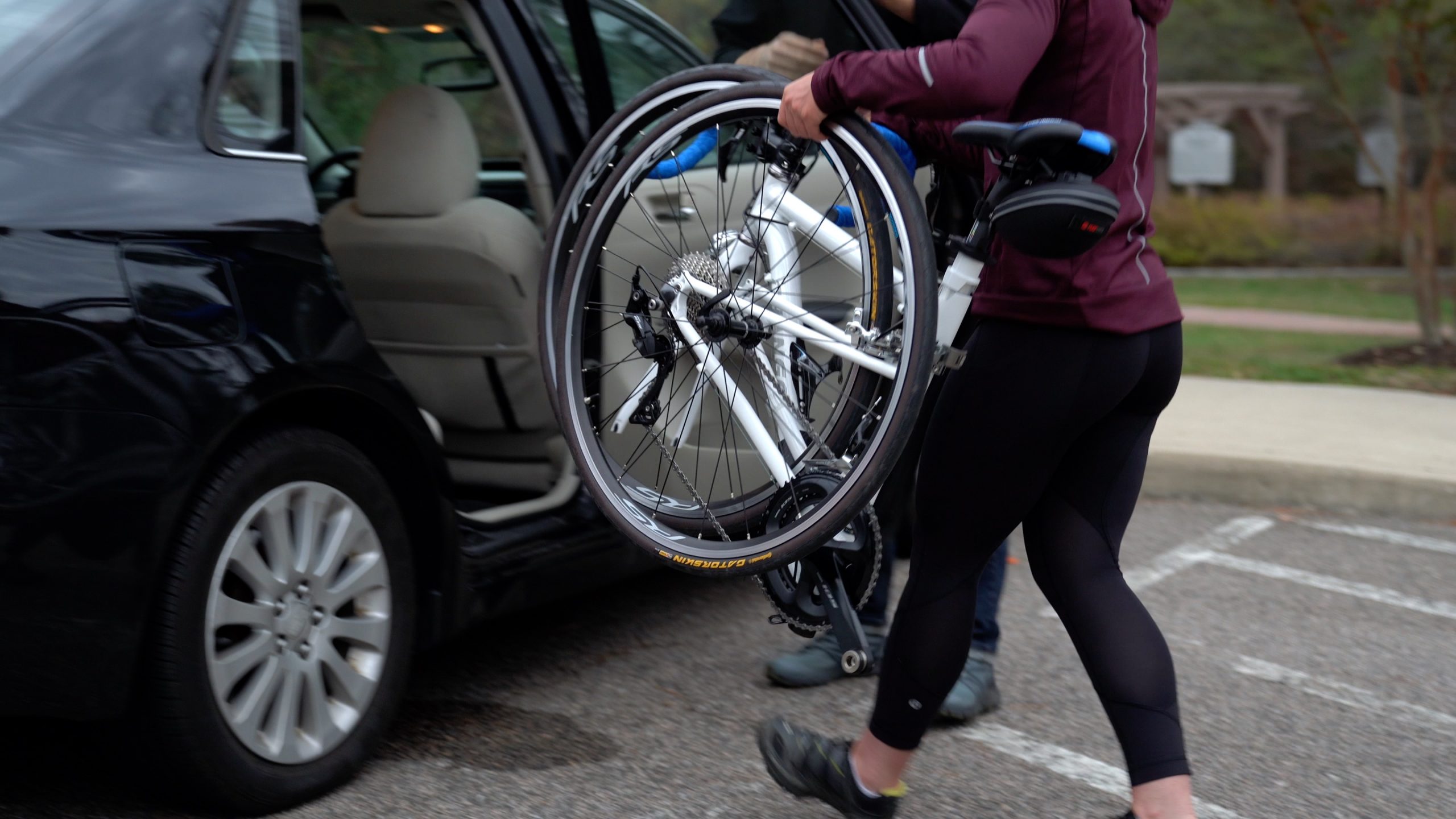 A full-size bike that fits inside your car, or your hotel room at night, is a secure bike. Which means you won’t need to keep one eye on your bikes in the parking lot after your ride. Enjoy your food/sleep!

To/from destination travel with a fold-away bike like a CHANGE bike is a bit trickier than with a folding bike or Ritchey Break-Away, as it is more suited to car, bus, or train travel—although some collapsible, larger hard shell cases exist.

One easy answer is to separate bike and rider travel. I’ve shipped my folded bike directly to my first hotel by a specialty shipper like BikeFlights and then flown without it–that’s even easier than carrying a folded bike!

Whatever method you use to have your biking adventures, consider a greenway in your adventure plans. If you’re not on the East Coast, look in Parade Magazine for a listing of a greenway in every state, including yours!