Yes, your CHANGE bike can be electric!

Last week, an electric wheel from Geoorbital arrived at Flatbike headquarters. Folding a CHANGE bike involves removing the front wheel anyway; could converting a standard CHANGE bike to an e-bike be as simple as attaching a different quick-release front wheel?

We decided to put it to the test on a CHANGE 702 folding commuter bike. Could this be the best way to a folding, full-size electric bike? 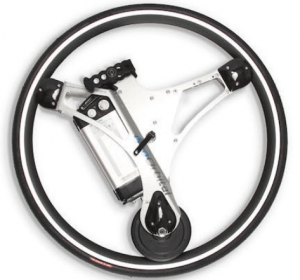 The maker of this wheel promises to “make your bike electric in 60 seconds.”

A lot more people are looking at electric bikes than a year ago. This month, at the Arlington Fly-In air show, the Flatbike booth got at least a half-dozen questions about e-bikes.

So it’s not surprising that e-bike ridership in the US is has quadrupled in recent years to over 1 million, and Europe is at 1.6 million. 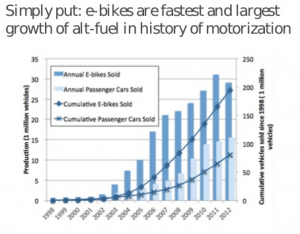 But the real story is China, which has over over 30 million e-bike riders. According to a study by the University of Tennessee, e-bike ridership in China is not just 30-million strong, but it’s the fastest growing transportation method in history, outselling cars since 2003.

E-bikes are a market force, and if China is any indication, it’s going to get a lot stronger. So let’s give it a try.

Installing an electric wheel on a CHANGE 702.

The Geoorbital wheel comes in both 700C and 26″, so technically, it could go on any CHANGE bike. Why start with the CHANGE 702 folding commuter bike?

Well… we did it out of laziness. A 700C wheel can go on your bike in 60 seconds, just like the marketing says. The 26-inch wheel? Not so much.

The 26″ wheel for a disc brake bike actually requires an extra $120 part that converts your front mechanical disc brake into a front caliper brake. (Note that this plan would not work for the CHANGE 612 folding MTB with hydraulic brakes). So not only does installing a 26-inch wheel take longer, and cost more, but it’s likely a one-way trip–no swapping back and forth with your existing 26-inch non e-bike wheel. We wanted that flexibility. 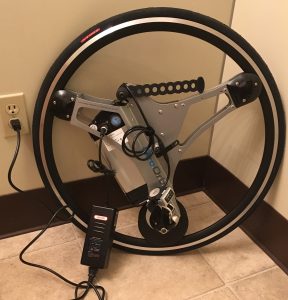 The Geoorbital wheel is simple to install–attach the axle and strap it in. The obvious first step is to charge it.

Once we got past the box weirdness–it opens from the bottom, near the warning sticker that says the other end should be up–all the steps for use were obvious, from initial charge of about three hours to putting it on the bike. 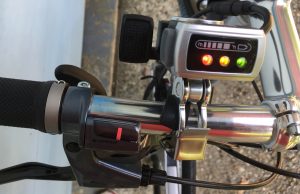 The throttle and battery readout clamps on in seconds, once you know where it fits best.

So while the first installation was slowed by battery charging and figuring out handlebar placement, the claim of installation under a minute seems easily justified. It’s super-quick. And it comes with an extra charger (for work) and a wonderfully well-made carrying case.

Riding a CHANGE bike as an e-bike.

The first thing you’ll notice about the wheel is the weight. A motor and battery add 15-20 pounds to a bike, and this wheel is no exception.

The 700C version weighs 21 lbs, but you take off a standard wheel to install it, so the net overall gain turns a 23-lb bike into a 43-lb bike. For that, you get 20 miles of pedal-free propulsion, or longer distance if you actually pedal. 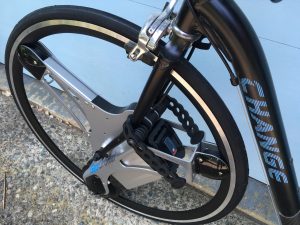 The inside of the wheel remains stationary, rolling against an outside rim with no spokes.

The alternative 26-inch version has a smaller battery with 12-mile unassisted range, with a smaller overall weight of 15 lbs as well. We didn’t test this, but putting a Geoorbital 26-inch wheel on a 26-lb CHANGE 611 folding rugged hybrid would likely result in a 39-lb bike after removing the 2-lb original wheel. Lighter than an electric CHANGE 702, but not by much.

It’s this weight that my wife Kathy felt first, as she maneuvered the bike toward the street. It’s like carrying a bag of groceries with you, as you pedal, turn, or turn the bike around. In this case, 20 pounds extra is roughly equivalent to carrying 2.5 gallons of milk.

Even on level ground, the increased resistance was noticeable, resulting in a drop of about three gears to get the same level of effort. This isn’t unlike gearing down when carrying a load of groceries, and the difference may have been entirely weight-related. (An interesting test would have been to ride with the wheel and no battery, since it can be easily removed for charging.)

She adapted to it, however, and was no longer focused on the weight differences when we took it along a quiet trail through an urban wetland park. The electric wheel is not silent, but it was the clicking of my non-electric rear cassette that chased away the amazing wildlife we saw that afternoon… 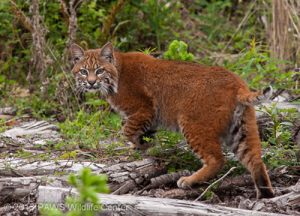 A bobcat in a city park??? The things you see on a bike, when you get out exploring…

And then, when it was time for the ride back up the steepest hill around, Kathy simply pressed the throttle and zipped up the likely 15% grade of Sean’s Hill. When she did pedal, I suspect it was more out of curiosity than necessity. On a standard CHANGE 609 folding street MTB, I could climb the same hill fine without lowest bottom chain ring, but there was still no way I was going to keep up with her superpowers.

Our conclusion about e-biking.

In total, I’d be surprised if Kathy used the electric motor more than five minutes–five glorious minutes!–on the entire afternoon’s ride. The rest of the time was normal cycling with a heavy load. At the end of the ride, she asked me to put her regular wheel back on, but to keep the e-bike wheel around so she could keep up the next time I chose someplace hilly to ride.

And that right there is the biggest value of the Geoorbital wheel. Because it’s so easy to put on and take off, you can make trip-dependent choices about when to use it. On today’s ride, which do you value most: a sporty 23-lb bike, or hill-climbing superpowers? It’s great to have that choice. 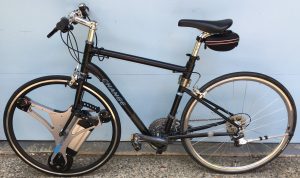 The high-tech appearance of the front wheel got lots of looks as we crossed intersections.

While we won’t be installing and shipping CHANGE bikes with electric front wheels, we do recommend Geoorbital as a $1,000 add-on for any CHANGE 702 rider who is concerned about hills or showing up for work sweaty. Heck, with a beefy 20-mile unassisted range, you can even throttle all the way to work without pedaling (avoiding all stop and go traffic) and get your workout on the way home.

What do you think about e-biking with CHANGE bikes? Is 20 miles unassisted too much? Is there a need for a battery with a tenth the range and weight, just for erasing a single nasty hill? 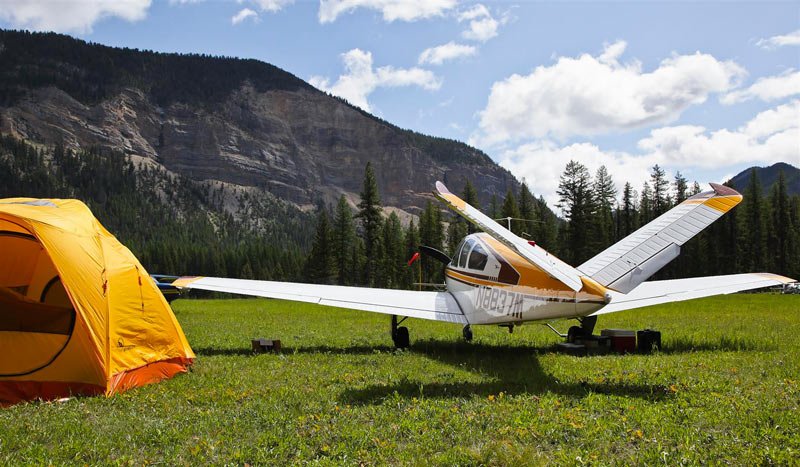 The perfect bike for private pilots?

Seven basic skills every cyclist should have (and what’s new)