It had to happen eventually.

With biking, speed is typically limited by the rider’s physical conditioning. But once you add a battery, speed simply becomes the output of an equation. More amps deliver more torque and ever higher speeds. With enough power, the line between bicycles and motorcycles eventually gets blurred.

What’s legal? E-bike law (in California, which leads in these things).

E-bike regulation is the US is currently an evolving patchwork of state laws, but a big one to watch is California. 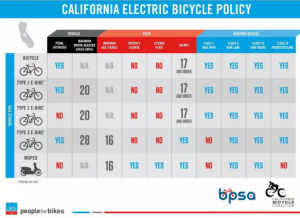 In short, there are 3 types of e-bikes, and all have speed limits, ranging from 20-28 MPH.

This is a packed chart, but a major takeaway is a speed limit on public roads of 28 miles/hour on any public road. Off-road e-bike usage is already prohibited in federal and state parks.

So now let’s look at four e-bikes that can’t be ridden on trails, and aren’t explicitly street-legal either.

All of these bikes have the frame’s front triangle filled in with battery, featuring the basic outline of a motorcycle, and most can hit speeds of up to 50 miles per hour! 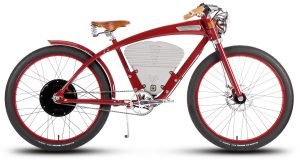 With a look halfway between a vintage Harley and a Flexible Flyer, this looks like a motorcycle from another time. But don’t let its retro appeal fool you. It packs a very modern 3-kilowatt battery into its 74-pound weight, delivering a top speed of 36 miles per hour. 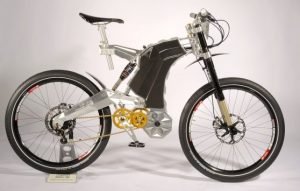 At 50 MPH, this bike is fast enough to get you a ticket for going double the residential speed limit–if you were allowed to ride it on roads. It weighs 65 pounds, delivers 2000 watts, and costs a whopping $36,000 (more than a 2018 Mercedes-Benz GLA). 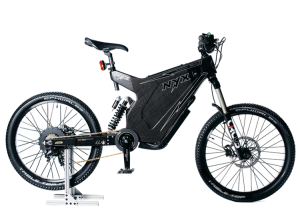 It weighs 120 lbs (equivalent to a bag and a half of concrete), costs a comparatively cheap $9,130, and delivers 5 kilowatts of power to go 50 MPH. 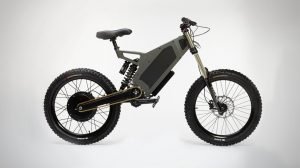 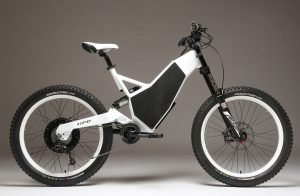 Weighing in at 79 pounds with a price tag of $13,500, this bike features a battery back that delivers 6 kilowatts of power. For comparison, that’s like a whole roof of 30 solar panels working at full output. Top speed, 50 MPH. 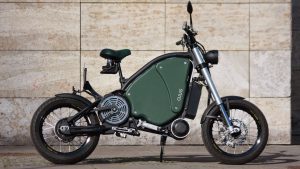 And we thought 50 MPH was huge! This ‘e-bike’ has mostly motorcycle components, weighs 282 lbs, and cannot be pedaled once the battery runs out. But it does have pedals, they turn, and you can give the appearance of pedaling a bicycle down the freeway at 71 MPH–before you get ticketed for speeding or having a bicycle on on the freeway. Price for this amusement? $34,000. (Thanks for the tip, Marc.)

And now for something completely different. 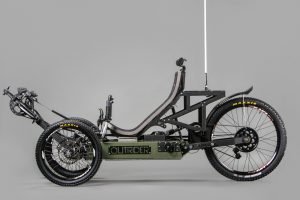 Technically, this one isn’t a bicycle. It’s a trike. A 99-pound trike that blasts you at 40+ miles per hour (60 feet/second) just 15 inches off the pavement. It may not be the fastest e-bike here, but I’ll bet it feels that way!

And since it’s technically not a bike, do road-rules apply keeping e-bikes over 28 MPH off the roads? Or does it require licensing as a motor vehicle?

Ultimately, that’s the problem that every state government is facing. As engineers continually devise clean, efficient, and cool ways to move people, how do these fit into the transportation network? They’re less rugged in traffic than motorcycles–which don’t have a super-safe track record themselves–and yet these are fast enough to create their own danger zone among pedestrians.

From a user perspective, it’s a bit like owning a Ferrari F430 (top speed 218 MPH) and having no place to enjoy the upper 3/4 of your vehicle’s range. Where do you ride it?

See you out on the roads…legally! 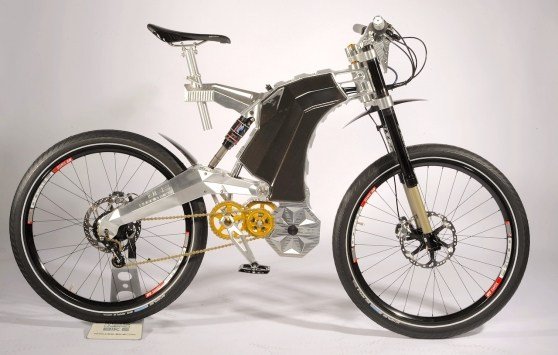