Every day, 2.7 million cars enter New York City–most carrying just a single passenger. How does a city with that much car traffic also end up the seventh highest in the US for biking ridership? 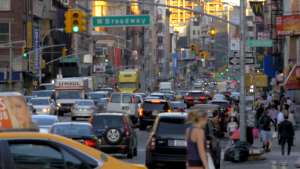 The 5 Boro Bike Tour isn’t the complete answer, because all NYC cars are diverted from the 40-mile course for one Sunday morning to allow 35,000 cyclists to pass through, but it’s a great place to start. Passion for cycling drives more bike infrastructure, which in turn makes more people passionate about cycling. This event is a huge part of that successful cycle that drives cycling. 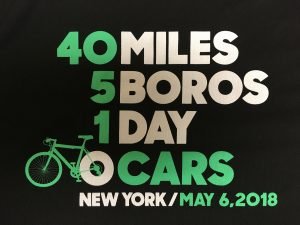 Who can pass up a touring day with no cars on the road?

Even before the event, cycling back and forth through Brooklyn to and from Bike Expo NY on roads that still had cars, I was impressed at the level of separation between bikes and cars. 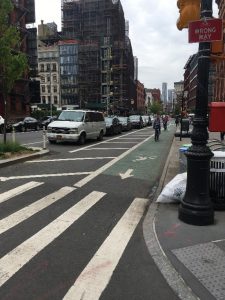 According to Active.com, NYC  has over 55 miles of protected bike lanes like this or better.

Many cities simply add shoulder bike lanes to their largest, fastest avenues in the mistaken impression that two inches of white paint will protect cyclists from 40 mph lethal projectiles. If there’s a car parked in the lane, or even a permanent sewer grate, you’re suddenly out in high-speed traffic. I’d rather ride on the sidewalk—something that’s illegal in NYC if you’re older than 13.

Instead, NYC has a huge number of one-way streets, many of which have been converted from double- or triple-lane one-way streets to single-lane streets that accommodate both parking and bikes—sometimes two-way bike lanes. 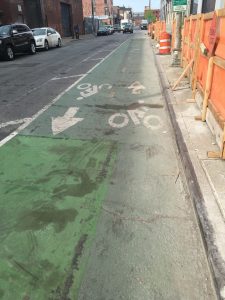 As a result, even when riding to one of the FIVE STARTS of the 5 Boro Tour—it’s a massive event!—I felt as safe riding here as in my own 25 mph quiet residential neighborhood back home. That’s quite a civil engineering achievement in a big city.

My 5 Boro Tour plan smacks up against real life…

So, the idea was, I’ve already got three demo bikes at Bike Expo NY (…OK, two after someone convinced me to sell one while showing it…). After the show, I would outfit a CHANGE 702 commuting bike with some signs about full-size bikes that fold, add some flyer pockets, ride along in an overpacked, slow-moving event, chat with everyone around me, and hand out CHANGE bike flyers as we meandered along in a tight, plodding pack. Genius! 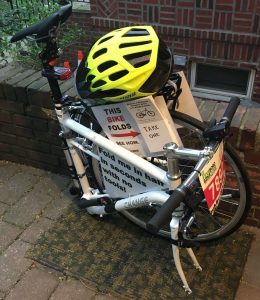 My trusty steed, ready for action after going up and down stairs with ease.

Yeah…that plan fell apart even before I got to the start. With no bike map of NYC, I was variably dependent upon an iPhone and other riders who had more of a clue about directions. So while trying to find the very obvious routes to the Brooklyn Bridge, I had a chance to ponder these three big navigational questions: 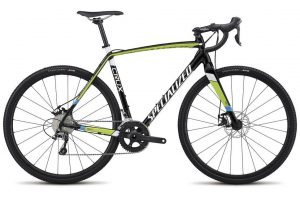 A strong rider on one of these… my salvation and my undoing.

Amid these reveries, a student sped past on a Specialized cyclocross bike, headed for the Brooklyn Bridge, and the chase was on. I was finally aimed in the right direction, using the upper mid gears, chatting and bonding over components with another city rider who also likes going fast, and life was good…

…until I looked back to discover that my elegant signage display had blown apart in the wind. Yard sale! (That’s when possessions are 9/10 of the lawn). So I abandoned my riding buddy, stooped to retrieve all the flyers from the road, and committed myself to a more plodding pace.

Finally across the Brooklyn Bridge, I was now navigating Manhattan on my own…still without a map. Did you know there’s a place in Manhattan with three consecutive one-way streets heading South? I was so glad to eventually find a street heading North that I just took it in a hurry, because my start time was minutes away. 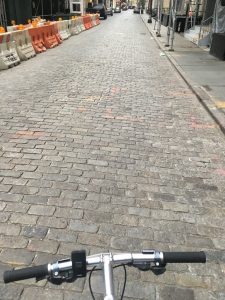 Well that’s a surprise! Apparently Pittsburgh isn’t the only city that paves with bricks sometimes…

At this point, I should probably mention that neither tire had air in it. By design. This became the ultimate test of the Tannus airless tires I’d added as an experiment during the Bike Expo NY. They performed surprisingly well in the extreme condition of a brick road in a hurry. As did the CHANGE bike. But I can’t imagine taking this street at speed with any other folding bike, especially any with a tall seatpost or tall wobbly handlebar set.

As I got closer to the ride, with more cyclists around me, I started to follow some, then others, then realized that they were all going in different directions. Remember the five starts? Following someone to “the start” of the 5 Boro Tour is like following a game of hide and seek.

Eventually, I joined a stream of riders mid-stream, probably a later start than my start, in a ride that already had spread out enough that the “grab a flyer” idea was absurd. Not that I had signage or flyers available anymore. 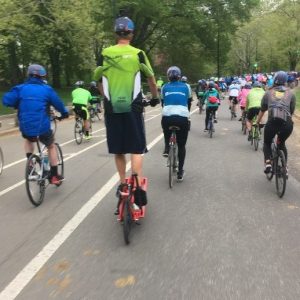 Among the ride…a contingent of Elliptigo riders from the manufacturer, demonstrating a bike that will never give you saddle sores.

The real nature of the 5 Boro Tour.

My expectations about being confined elbow-to-elbow with 35,000 slow-moving riders were way off base. But the chatting part? That was right on the money. I hadn’t gone two blocks before I heard conversations striking up all around me, like this one with a kid and an adult:

“Hi, Benny. I’m Jackie. Pleased to meet you. Are you doing this for a charity?’

This ride is a huge mix of ages, fitness levels, reasons for riding, bike styles, borough preferences, even nationalities—it’s a huge swath of New York City, converging on a once-in-a-year opportunity to enjoy a circuit that only cars can do the rest of the year. But a lot faster, with no car traffic. 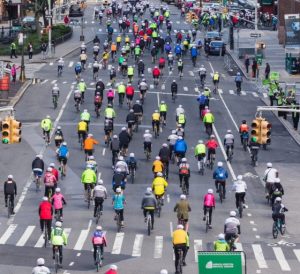 I won’t be handing out flyers in this.

Mindful of the need to ride more slowly, which actually no longer existed after the flying flyers ended up stored in my pocket, I rode next to another first-time tour rider, also with an unusual bike selection. When Sarah had announced to parents, friends and coworkers her intent to ride the entire tour on a one-speed bike, there was universal concern. And here she was, hoping that 40 miles on one day wasn’t a bit much, next to a guy on a folding bike with experimental tires.

But the tour is mostly flat—we agreed it felt downhill 2/3 of the time—with the only memorable climbs being on the five bridges it crosses while winding through five boroughs. Both of us liked to push the pace, and the five boroughs melded together into a single activity that combined cityscapes, parks, smooth curved downhills, and safety-monitored corners into an event that had covered 40 miles before we knew it. We ended up in the finish party before it got totally crowded. 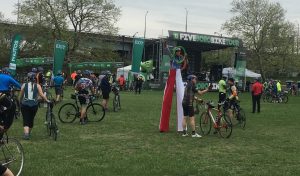 What’s a finish line party without hula hoopers in stilts?

This is probably the best supported ride I’ve ever attended, with participants also entering and leaving the route in all five boroughs, and an entire ferry line commandeered to take tens of thousands of riders from Staten Island back to the start in Manhattan. 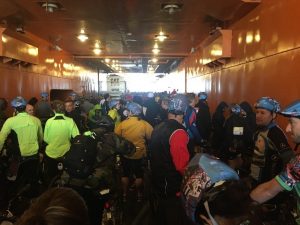 No cars on the car ferry, either.

How to get home from the start?

Participants bring their bikes to this event by car, train, and bike propulsion, and I’m sure there were some crowded areas where this coming-and-going transition happened. As for my riding partner and me, we were still in exploration mode after three hours of tour and spent the next hour or so exploring Manhattan before I went back “home’ to Brooklyn. 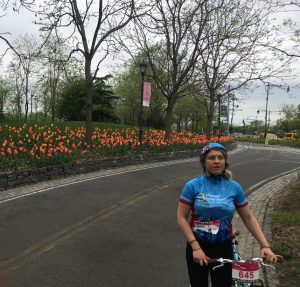 Amazingly, this is not a road. It’s a bike-only highway along the west side of Manhattan.

Some of the best locations and routes we discovered weren’t even part of the tour. And maybe, in the end, that’s the real message. The 5 Boro Tour is a wonderful event, but it’s just the beginning of the safe and exciting adventures you can have in New York City.

Got a city-friendly bike that fits your life? We do!

See you on the lanes, roads, and trails… 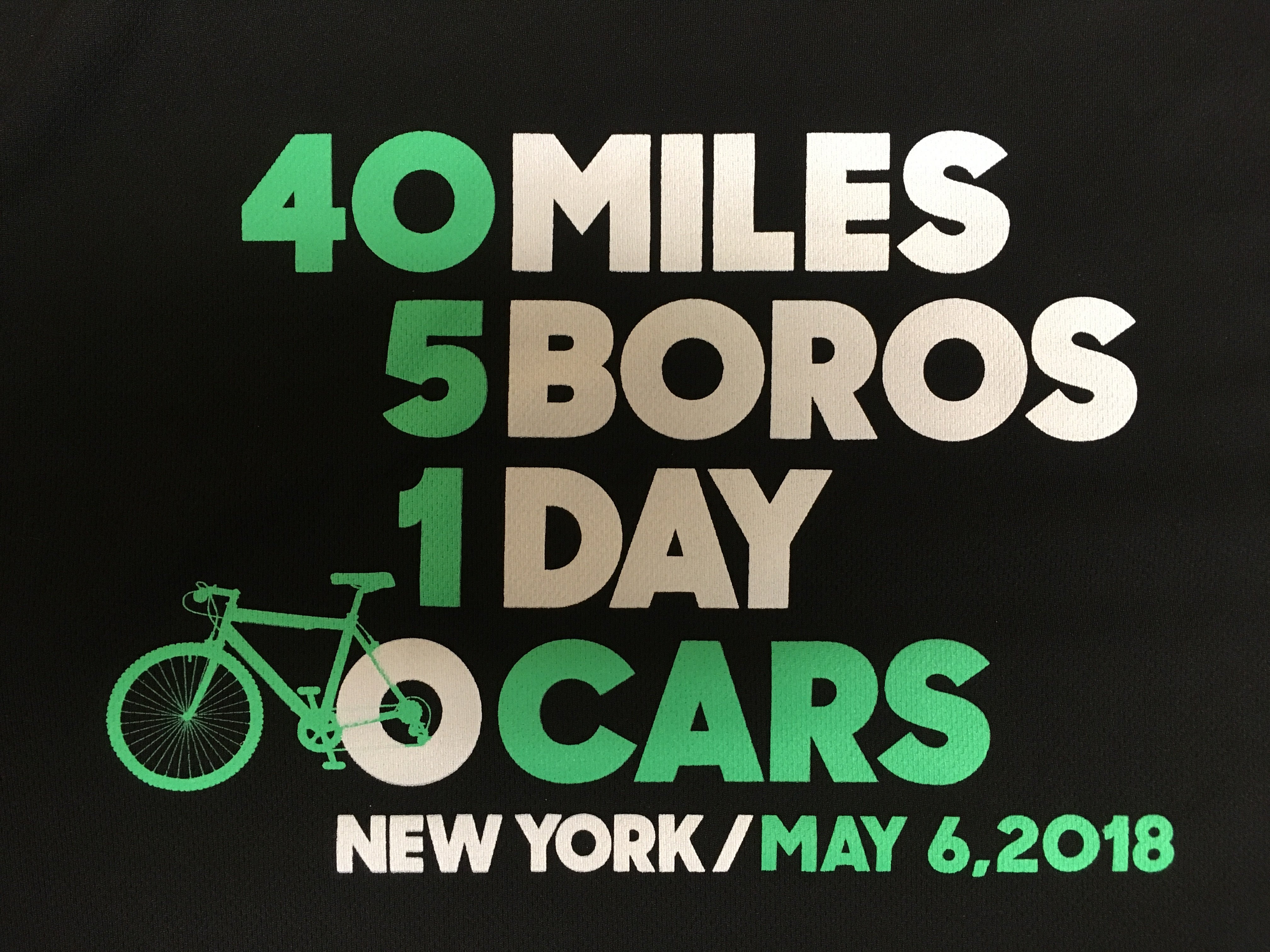