In the US, a “road bike” is more than just a bike ridden on roads. There are certain…expectations. It needs drop bars, or at the very least, bullhorn bars to offer multiple upper-body positions on longer rides. It must have narrow wheels, but not too narrow. It also has a range of fast gearing, but not to the exclusion of hill gearing.  And it has to feel nimble and fast.

That’s a lot to get exactly right. 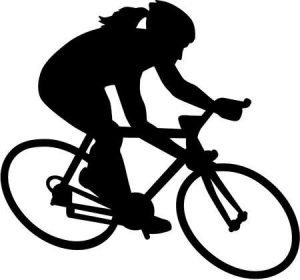 If it doesn’t feel nimble on the roads, it’s not a road bike.

For the past five months, we’ve had all the parts for a road bike on a side table in the shop, waiting patiently for some downtime to assemble into a functional bike. But 2019 had zero downtime so far and was getting even busier. So on May 1, we got an insane idea—just build it in the middle of the night instead of sleeping before the flight to Bike Expo NY…and then ride it in NYC’s 40-mile Five Boro Bike Tour.

What could possibly go wrong with this plan?

The plan of the Century. 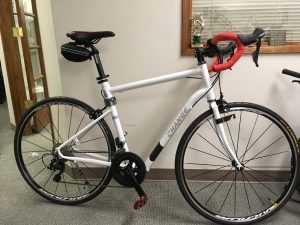 This bike is designed for fast, comfortable long rides. So we’re calling this model the CHANGE Century. What’s appropriate for a bike that you might be riding 100 road miles, over a variety of hill conditions? Here’s our spec list:

The plan was to build this, get it to NYC, get lots of feedback at Bike Expo NY, ride it in NYC around cars as primary transportation before and after the show, then ride it around zero cars in the 42nd annual Five Boro Bike Tour. How would it stack up against other road bikes in actual use?

“105 gearing is a good choice.” The first person who made this comment was still a good 15 feet from the Flatbike booth–and the bike was behind me. This was my first sense of how well road bikers can scope out the specs they appreciate. The gearing choice was solidly supported the entire weekend, although we didn’t get down to the cog level. 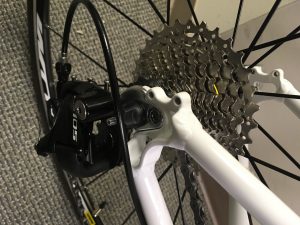 Shimano 105 11-speed cassette with long-arm derailleur to get into low gears too.

“I want to be able to swap quickly between SPD and flats.” That’s a comment we heard over and over, with mixed preference for flats or clip-in pedals as the primary pedals (not that it matters when it’s a 6-second swap-out operation). Interestingly, I also learned that the SPD pedals we’ve been selling are actually mountain SPD, but are often preferred by road cyclists because your foot can come out easier as needed in traffic/pothole situations. 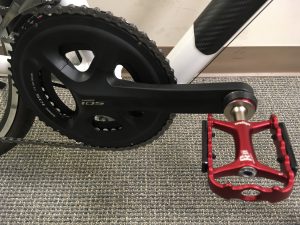 Second-generation pop-off pedals have have gotten the thumbs-up from some pretty serious pedal connoisseurs.

The unique stem selection was intriguing to more riders than I expected, with nearly all seeing the benefits of a bike that folds flat for wall storage in the city. About 80% said it should be standard, with the others saying it should be an option. 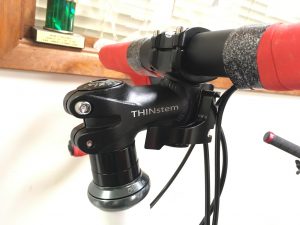 The kickstand/latch combo was interesting to many road bike riders, but still represented 13 ounces to an audience that pays to make ounces go away. Verdict: Make it an add-on sell.

Real-life has a way of making priorities clear. Why fold a road bike? Because it was my main transportation and I was using Airbnb. I had a wonderful little room in Brooklyn, with just enough space for a big comfy bed, a dresser, and a desk. 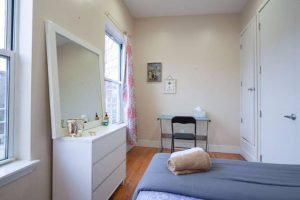 And on either side of the desk is enough room for a folded CHANGE bike. Two of them, if needed.

But first, I needed to get my bike off the street and up to my room. Up a steep stairway, with a tall railing on one side and a collection of motorcycle jackets and helmets hanging on the other. An ordinary road bike doesn’t stand a chance. 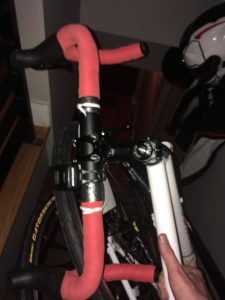 Fortunately, this is no ordinary bike. Easy-peasy when folded.

But if the whole bike folds, why also have a folding stem? Because sometimes you want the wheel on, but the bike to be completely flat–like in a 10×10-foot bike show booth…or in the office before the show. Here’s how a road bike fits conveniently behind a door. 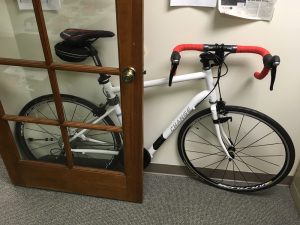 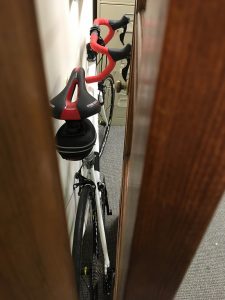 The combination of drop bars and Shimano 105 gearing is where things get really interesting. For those who aren’t familiar, 105 gearing combines the derailleur with the brake in a single lever, putting any gearing adjustment just a twitch away.

From my perspective, I was already leaning in on drop bars, enjoying the aerodynamics, and whenever anyone appeared ahead of me, acceleration was just a twitch away. Braking was also a twitch away, perfect for conditions like this… 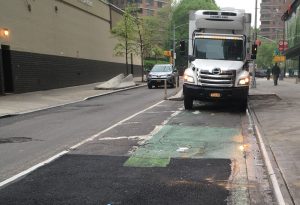 The day of the Five Boro Bike Tour featured a constant drizzle and a humorous mix of responses, from wet folks hiding under awnings (avoiding getting more wet?) to wet folks under waterproof parkas (until they sweat and get wet from the inside), and folks like me who simply accept that rain and wet go together. Just take corners intelligently and you’ll be fine. 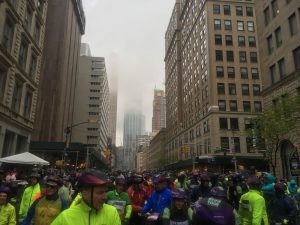 Nearly 1/3 of this year’s 32,000 registrants missed the event because it was wet.

I rode this event last year on a road frame and thoroughly enjoyed it. But this year, the ride was combined with drop bars, super-responsive gearing, and a serious case of twitch-finger. It’s a tour, not a race, but a certain number of folks ride for speed anyway, and I needed to be ahead of the “squirrels”–folks who ride erratically, faster than their skills or weather conditions allow, and cause accidents for others.

This is how “road brain” works: having just rationalized going fast to stay ahead of the dangerous fast people, I resolved to use only my low chain ring to ensure that I wasn’t going too fast and being a squirrel to others. The whole event for me became a calculated exercise in fast cadence, predictable curves, and explosive straightaways. By mile 20, I was about 100 bikes behind the pace cars that were slowing the front of the pack so  the finish celebration could open with a sufficient pack of riders–the real difference between a tour and a race.

Up in the front, bikes are traveling close together, there are no squirrels, and the pace is determined by the cars ahead, with alternating rippled calls of “Moving!” and “Brake check!”. All on wet pavement. This situation over miles is going to wear down any brakes, and I was actually glad that I had rim brakes instead of disc. I felt no loss of control, even in the rain, and rubber pad replacement is cheaper. 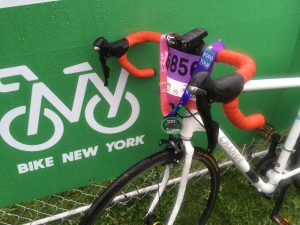 And just like that, it was over. Another finish medal, and another year’s tour full of memories. 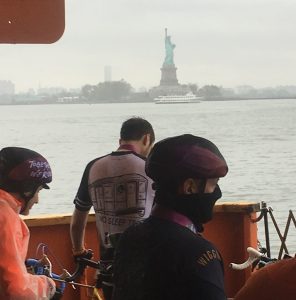 I had a plane to catch, so I caught the first Staten Island ferry, at the front, right where the wind whips against cold wet skin. Brilliant. At least the view was great.

So when is the CHANGE Century orderable?

The latest thinking is that we’ll have final testing done on multiple sizes in two months, with a wheel supplier selected and in use by mid-July.  In the meantime, what guidance can you give us about making this launch work best for you?

See you out on the roads!

2 responses to “First look at the CHANGE foldable road bike” 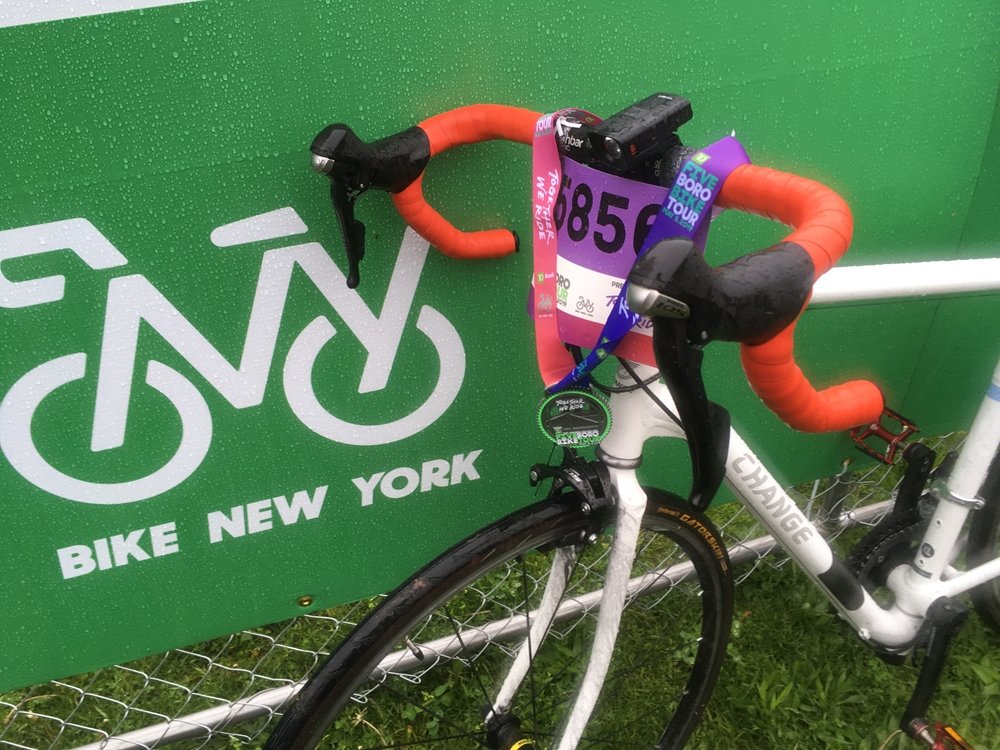