News about the unappreciated kickstand

A few weeks ago, I got a call from George in Ontario, asking if we sold kickstands separately. It seemed an odd question. Who cares about a kickstand?

George, obviously. And after a few minutes of speaking with him, so did I.

But first… how did we get to this point, where a previously essential item is often considered a meaningless add-on?

Evolution of the kickstand 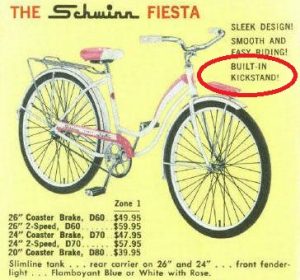 In the early 60’s, a built-in kickstand(!) was a big selling point for a new bike.

As late as 1980, a kickstand was still a standard, built-in feature at least on Schwinns, even if no longer a mentioned selling point.

But eliminating the kickstand, which is useful only when the bike is stationary, is also a quick, cost-free way to shed a pound in the inevitable march toward ever lighter bikes. Kickstands became optional add-ons, either at the crank or along the seat stay. 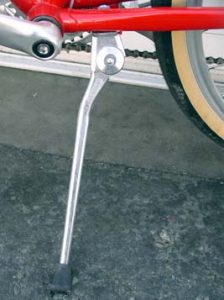 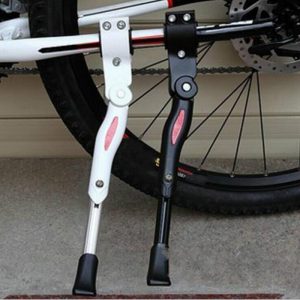 The problem–and this is why George called–is that both variations have problems for touring bikes. Crank-mounted kickstands hide under panniers (and have a tendency to loosen slightly on all bikes, until eventually your foot hits them during each pedal revolution). And seat-stay-mounted kickstands actually interfere with panniers, both pushing them out and making the whole loaded bike pivot around them.

CHANGE bike to the rescue?

CHANGE bike kickstands are different. Axle-mounted, they are completely out of the way of panniers, making them perfect for touring bikes. 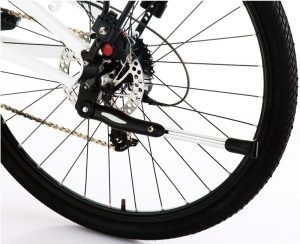 A CHANGE bike kickstand is always out of the way of the rider’s feet and equipment.

And on the 702 commuter bike, the kickstand has an innovative secondary use, holding your bike in the folded position even as you carry the bike around. Technically, the kickstand is a CHANGE bike accessory, but at Flatbike, we consider it such an essential part of the function for all 702 commuter bikes that we buy it and include it by default for that model. No extra charge. 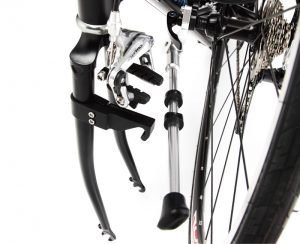 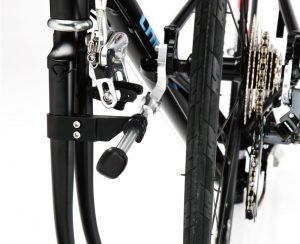 This is all great for CHANGE bike purchasers, but what about third-party usage? George rides an expensive touring bike, not a CHANGE bike.

We talked about the frame-hugging shape of the aluminum at the top, and the lack of customization across the bike industry for where screw holes go. It might not work, but he’s willing to give it a try, even if it means a bit of customization at his end. He’ll send photos…

Still, the kickstand problem remains a big one for the bike industry. How do you keep the kickstand out of the way, yet available and lightweight when you need your bike to stay upright (and not scratched) on its own? 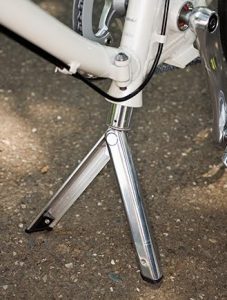 One solution, although not lightweight, is to mount a dual kickstand inside the frame, as Giant does on its folding bikes. As an added advantage, it lifts the rear wheel off the ground for maintenance.

A relatively new development is kickstands that have no connection to the bike, so you can decide on a whim whether to carry them with you. 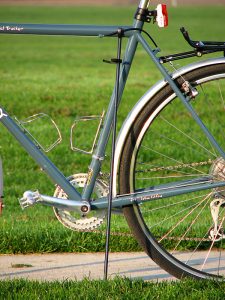 The ClickStand is like a folding cane for your bike. Snap it into extended position and use it to prop your bike up easily, as long as it doesn’t roll. 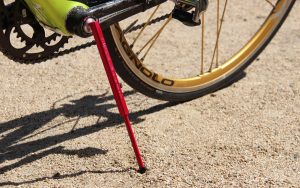 And the KwikStand folds up even smaller, fitting inside your crank bolt…and your shirt pocket.

The KwikStand can even save lives. Seriously. Stand4Cure designed it, sells it, and donates $3 of each sale to a disease-fighting charity chosen by its advisory board.

Who knew that the lowly kickstand could be so exciting and influential? 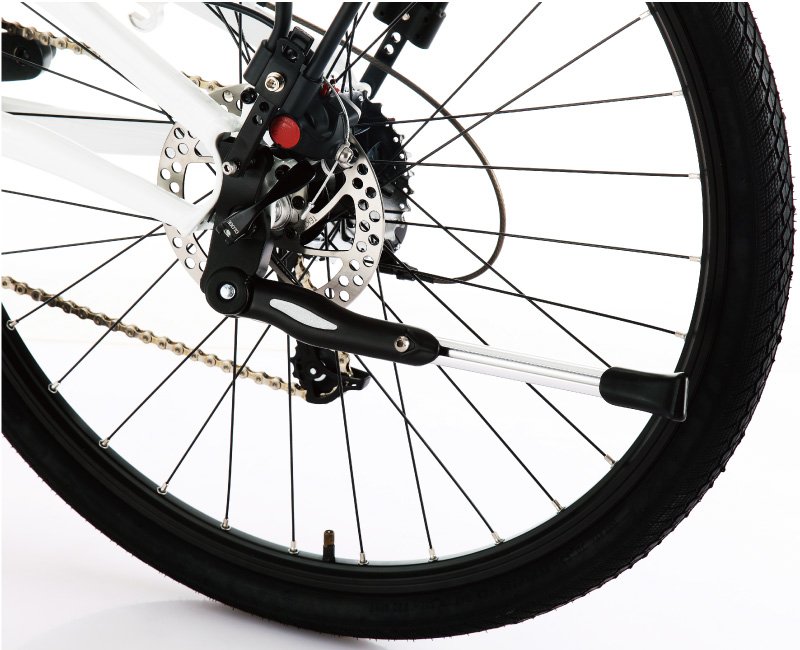 Changebike vs. Montague: A head-to-head comparison

Your next bike is more affordable than ever