Back when I was a self-absorbed teen rider, my only concern about bike visibility was overrunning my headlights in the high-speed descent part of my night-time commute. Taillight? Screw-on reflectors? Psshht. Those don’t help me go faster…

No, but good low-light visibility for others can keep you riding safely for a lot more years.

Now that I routinely ride in the dark and rainy Seattle winter, frequently passed by drivers who may not be adequately focused on safe driving, I appreciate more than ever the importance of good lighting and reflectivity that make my presence known as early as possible.

Today, we’ll look at ways to make increased visibility possible, from the cheapie traditional options to the latest high-tech gizmos.

Back when cycling was undergoing a growth spurt in the US in the 1970’s and 80’s, with lots of new folks coming into cycling, these bulky plastic reflectors were everywhere–on pedals, front wheels, back wheels, in the ditch after they spun off of front or back wheels… They were totally visible, but also likely to crack and fall off.

Spoke clips are the updated version of wheel reflectors. They’re just as reflective (especially together), but not as bulky and fragile. One of our bike customers who does bikerafting is a big believer in these super-simple reflectors for side visibility on remote roads.

For better or worse, a bright-colored bike is more visible anytime. Some of our riders choose a visible bike color, such as white or arctic blue, for this reason.

Night riding is not the time for “cool” black hoodies. For visibility, I used to wear my reflective running vest on my bike at night, until I discovered rain jackets designed for cyclists–stay dry and visible! When I’m this lit up by headlights, I feel totally fine with a reflectorless black bike, even in the rain.

Advances in lithium batteries and diodes are giving us increasingly bright lights in small, convenient, rechargeable packages. That’s both an opportunity and a problem.

With a tail light, you want to be visible enough to get the attention of distracted drivers, but not so much attention that you become a focal point for drivers to zero in on…and drift toward! This phenomenon is called target fixation, and it’s a familiar risk for police everywhere, even in broad daylight, as this safety video from the Utah Highway Patrol shows.

There are unresolved debates about what exactly causes target fixation, with one side arguing that a blinking light–on and then darkness (or night blindness)–is so different that it causes too much attention. The other side argues that a steady light is so similar to the tail lights of faster cars that people behind you don’t slow down enough. Perhaps the best option is two lights–one steady, one blinking–of 1,000 lumens or less.

With headlights, there’s an additional factor; you use this light to see where you’re going. But still, the same principles apply. Any extra light that you don’t need just makes you stand out more. So 1,000 lumens, aimed down at the road ahead of your wheel, is perfect. 3,000 lumens, on a headlamp aimed up at every car you’re watching approach, is pure lunacy.

About a year ago, while looking for unusually good road bike wheels, we came across these reflective rims. The total reflective area is about the size of three of those old plastic prism reflectors, but they’re aerodynamic, they can’t fall off and the weight is negligible. We bought a pallet of them and have them for the Flatbike Century folding road bike or separate purchase as a stand-alone wheelset.

We also came across something super-simple if you already have a favorite set of disc wheels. We haven’t tried them yet, and they’re sold only in Europe, but reflective stickers from FLECTR give any disc rim a reflective upgrade.

I was fortunate enough to get a Lumos helmet for a gift, and have been using it for commuting on rainy nights in the Seattle area. It’s not perceptibly heavier than a standard helmet, but no matter what I’m carrying on my bike, even if the rear light is covered up, this is clearly broadcasting my location, from the back, sides, and front, without being overly bright. That’s a good feeling.

At first, I was impressed by laser bike lane technology. Create your own bike lane with lasers? How cool is that! But the more I think about it, not so much…

First, look at the lane width. It’s like a free invitation for any driver to blast by within six inches of your handlebars. Second, it’s unusual enough for drivers to come closer and observe what’s going on. How close? Maybe six inches if you’re lucky, and worse–night-time target fixation–if you’re not.

How much visibility do you need?

Ultimately, you’ve got a lot of options for making yourself visible, from old-school plastic clip-ons to emerging tech lithium and lasers. Follow the principle of being noticeable without being the main attraction, and your commuting bike can be a trusty steed year-round, day or night. 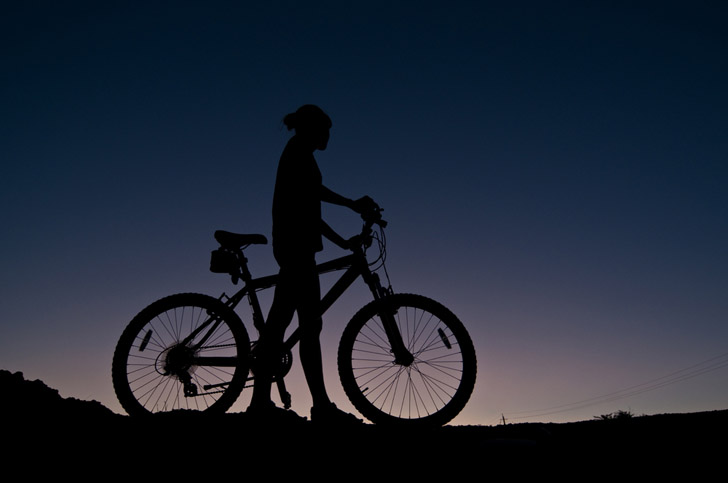