At the end of my workday, the entire ride home is uphill. Part of that is a section with sudden 110 feet of vertical climb with a lot of time to think–about the equivalent 11-story building, about counting a consistent climbing cadence (1234, 2234, 3234, until no longer needed), and about why in the world I don’t have an electric bike to flatten out this insane hill.

It’s easy, under those circumstances, to ponder the most basic question of all. Why am I doing this? There’s even my mental “rule” about not allowing myself the convenience of the smallest chainring when on a triple-chainring bike, even on that nasty hill. If rules are meant to be broken, then here’s the first candidate!

Well, it turns out there are good reasons for seeking out challenging hills. Here are three of them.

My high school hurdling coach had this notorious exercise called “bleacher laps”. We had to repeatedly hop up the football bleacher steps on one leg until the thigh burn really set in, and he told us we were done with that exercise.

“Now you’re hopping up every other step.”

“@$@$#%!!!” We were convinced our track coach was a sadist, especially when we were too tired later to fully clear the hurdles, and the difference between hurdling, hurtling, and hurting was a matter of semantics.

We hated it. But in the end, those intense exercises made us stronger–not just physically, for better sprint-hurdling race times, but also mentally. And when we saw some ambitious sprinter energetically doing stair climbs for strength, we weren’t impressed; we knew we could do the same thing in half the steps.

Conquering tough things becomes infectious. Before you know it, you’re seeking out challenges like stairs and hills because they’re hard, whether running or biking.

And the drive for tougher challenges can happen at any age. Consider this, from Reddit.

My son is 8 and he recently started getting bored riding around our driveway, so I took him to a local state park with miles of trails. He loved it, and we go regularly now. We stick to the easier trails, but even so, some of the hills are pretty tough. On one hill he just couldn’t make it, so I thought it would be fun to set it as a challenge. I told him if he could make it without stopping I’d get him the Nintendo Switch Lite he was interested in.

The next few rides, he made progress, but was still making it less than half the way up before stopping. Today he decided he would get it and attacked the hill six times in a row before he finally made it. I am one proud dad. Now he wants to do more challenges.

Resilience is created, one challenge at a time…

Suppose for a moment, your goals are a bit more down to earth. You don’t need to seek out new challenges and new adventures, to boldly go where no one has gone before. You just want to get back down to something resembling your old high school weight.

Hills help with that too, because of something called the “afterburn effect”.

All exercise is good, from walking that gets your body moving, to intense cardio that gives your circulatory system a workout, to weight-lifting that puts stress on your joints and muscles. But activities that stress your muscles keep burning calories long after your exercise has stopped.

Experts call it “excess post-exercise oxygen consumption,” or EPOC. And the basic idea is this…

After you’ve completed an activity that exercises your muscles to exhaustion, your body has a lot of clean-up work to do, putting everything back into place: restoring oxygen levels, removing lactic acid, replenishing anaerobic fuel sources (ATP molecules), and repairing muscle. That’s a lot of work! Work requires energy, and in the body, energy usage is ultimately in the form of calories burned.

The extent of EPOC is highly debated in the fitness world, with some sources saying that the afterburn effect is significant, up to a day or more later, with resistance cycling a top exercise. Others state that EPOC and the afterburn effect of high-intentsity training are oversold as a fitness solution, and you can’t really lose weight in your sleep.

And yet… it is a known fact that muscle mass requires more calories to keep and maintain than fat does, in what’s known as your base metabolic rate.

For every pound of muscle your body has, your body will burn an average of 6 calories/day. That same rate for fat metabolism, called lipolysis, is 2 calories/day. In orther words, muscle burns three times more calories! And that, independent of any afterburn effect or EPOC, is how you burn more calories in your sleep. Build muscle…through resistance training…like hills!

Every uphill helps you earn a downhill.

In my case, commuting downhill to work, I enjoy dessert first, riding at high speed, gravity-assisted, with wild abandon. But regardless of the order, every uphill has a corresponding downhill. So as you’re sweating out a tough climb, you can think about how much fun the return trip is going to be.

In fact, video games have been crafted around that exact idea…

Ready to get out on a bike? Hills await! 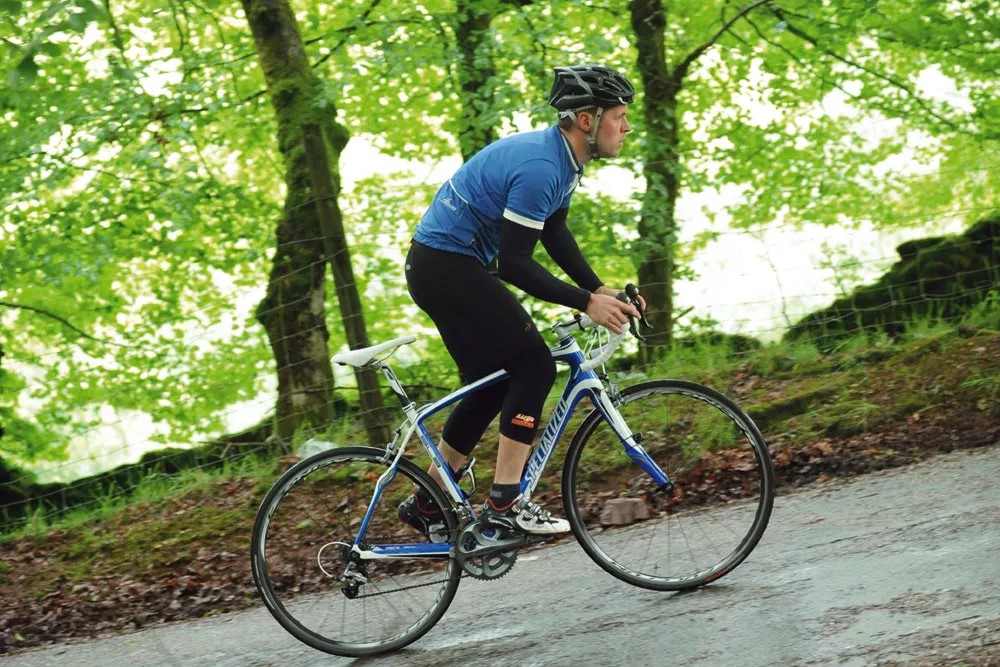