The night our folding bike rescued us.

My wife was waiting to pack the back of our truck for a weekend trip into the country. “You know there’s still a bike back there. Any reason?”

I shrugged. Earlier in the week, it was because I was driving into a dense downtown area and didn’t want to waste time looking for close-in parking. Now… well… I pretty much left my CHANGE rugged hybrid folded up inside the truck just because I could. No real reason. I stood it up out of the way and we packed beside it, with room to spare, and zero expectations of actually needing to use the bike. 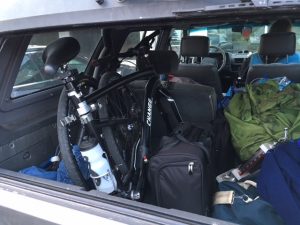 If your bike doesn’t take up much room, why not include it?

In decades of driving, racking up over 260,000+ miles total, our trusty old truck had never let us down. But suddenly on a distant highway, just after dusk on a Friday night, the clutch stopped working. We coasted to a stop in the dark beside the highway. Unable to drive further, we called a tow truck. 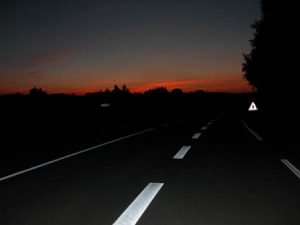 Waiting, the reality of our situation sunk in. Our truck was going to be towed to a now-closed service station, and we had zero transportation beyond that.

We were over an hour away from our destination, where hundreds of people expected us to show up with critical event supplies by the next morning. Are rental car places even open on a Friday night?

We called a place and they offered to rent us a car… as long as we showed up there in the next fifteen minutes. How was that even going to happen? It was two miles away!

CHANGE Bike to the rescue.

Then I remembered, I had all the transportation I needed. I pulled my ruggedized hybrid out of the back of the truck, popped on the front wheel, and rode at top speed on the highway shoulder toward the exit and the car rental agency. According to the urgent math in my head, I should get there in five minutes at 20-25 mph. Plenty of time.

But after a few minutes of furious pedaling, I looked down at the GPS app on my phone and realized I had forgotten to hit Start. When I fixed that, it placed me over a mile away–in the other direction. I was on the right road, but had overshot the agency by 1.1 miles and needed to double back! 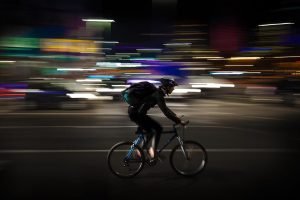 This wasn’t me, but the blur definitely looks familiar. And sadly, riding with no headlight (for now)…

Three minutes later, I was winded but walking my bike up to the counter of the car-rental place. “I saw you fly by,” the desk agent said. “You just happened to have a bike in your car?”

I nodded, filling out paperwork. “That’s pretty much it.”

Bobby from Enterprise Rent-A-Car took me on a visual inspection of the new car and how it worked. It was a lot sleeker and smaller than our truck, with a modest-sized trunk. “I think you’re all set,” he said.

“Almost. I just need to put my bike in the car.”

Bobby was skeptical. “Are you sure it will fit?”, he asked diplomatically, already sure of the answer. “It’s a sedan.”

“Absolutely,” I replied, picking up my bike, folding it in half, and sticking it in the trunk with room to spare. The look in his eyes was priceless. It never gets old. 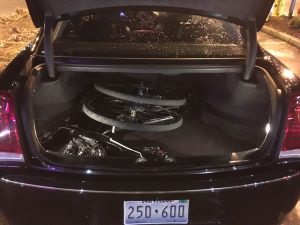 I could almost fit two of them in there.

The truck repair turned out to be a small one, we needed the rental for only a day, and the whole adventure turned out to be no more than a minor speed bump in a fun weekend. And that’s the point: CHANGE Bikes and random cars go so well together, you never know when combining them can rescue a trip for you, or even make a great day trip possible. It sure did for us! 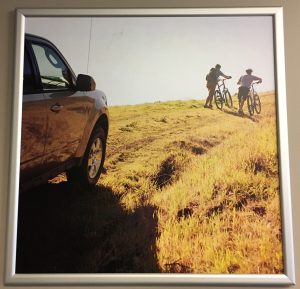 This photo at the car-repair place struck me as spot-on. And now you don’t even need an SUV to get out and explore distant places on bikes.

See you on the road… hopefully not stranded. 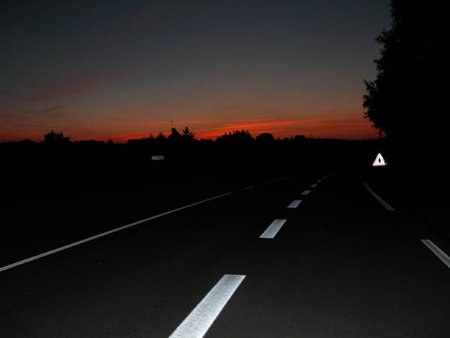