You’ve got a great bike. Not a cast-off cheapie, but one that finally meets your needs. It’s time to protect it. What level of protection is right for you?

1. Secure your bike against ride-offs.

Nobody likes carrying a bike lock around. It dangles and clanks, and it’s often heavy. So it’s really tempting to “go commando”, lock-wise. How long can you get by without securing anything?

And the answer is… until someone wants your bike more than you do. All the thief needs to do is hop on the bike and ride off on a freebie.

Sometimes this is a spur of the moment decision, like walking up to a random bike outside a burger joint and riding off faster than the non-mobile owner. And sometimes it’s planned; the thief rides up to a loaded bike rack on a cheapie bike, checks out the other offerings while locking up his bike, and then returns moments later to casually ride off on a better bike that wasn’t locked.

So the first step is to use anything to make the bike less mobile. A cheap, small cable can do this. And it weighs almost nothing. Just make sure you get a long enough cable to secure both wheels and your frame. 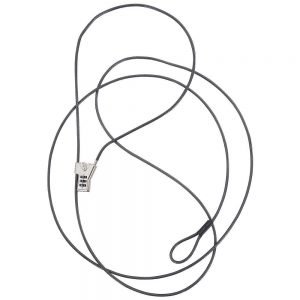 The NRS Vigilante Cable Lock. Better than nothing. Weighs almost nothing.

Interestingly, at Bike Expo NY, several visitors independently observed that our pop-off pedals, easily removed from the bike, are a form of security device. 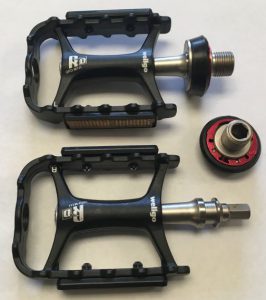 Pop these off, and you’ll have no rapid ride-offs … just walk offs of a bike that has no pedals.

2. Secure your bike against pocket tools.

So why isn’t a cable lock the answer to security? Because a cable lock is basically a metal rope made up of tiny wires wound together. Anything that can cut one of those wires–such as wire cutters or a pocket knife–can cut the lock open. That applies to any thickness of cable lock, so a beefy, heavy cable lock is really no better than a scrawny one.

The scene below is with a heavy-duty pocket wire cutter. With cheaper tools, usually it takes more than one cut.

There are a couple of ways to secure your bike against wire cutters. One is the way frequently done in Europe, with wheel locks. 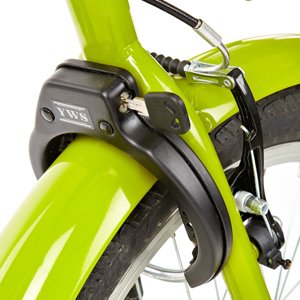 A wheel lock eliminates ride-offs. But your front wheel–or your whole bike–can still be removed.

Can a wheel lock be cut? yes. But not by a pocket tool. For that you need bolt cutters. 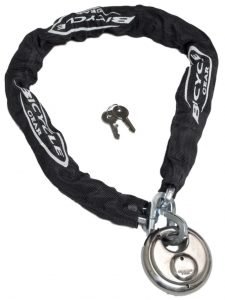 A chain bike lock can protect both wheels and attach your bike something secure. You can still cut it, but not with anything that fits in a pocket.

Another option is the U-bolt lock. These are treated as theft-proof, but as with chains, they can be defeated with a large hand-tool.

Because they are as strong as a chain but don’t clank or dangle, U-bolt locks are among the most popular bike security devices. Just remember to have one for each wheel or an easy way to get the wheels together. 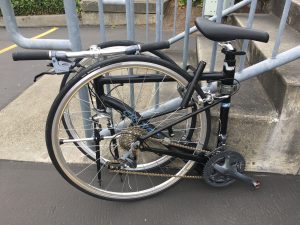 One U-bolt is plenty to clock up a whole CHANGE bike when folded.

3. Secure your bike against all tools.

Ultimately, the best way to secure your bike is to make it invisible. Out of sight, out of mind. Nothing to see here, move along! 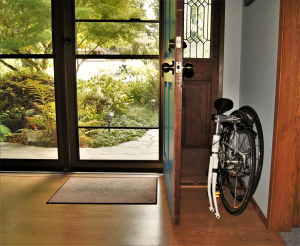 Whether in your apartment, workplace, or car, the safest place for your bike is where it’s free from temptation.

Some interesting new developments in the bike lock market.

There are always new ideas in the bike security area, and some of these may be primed for a breakthrough.

First, how do you secure that front wheel? Lots of ideas there, ranging from custom nuts (KnoxNuts) to axle padlocks (Quick Caps) to even a combination lock (C3N)…

As for protecting the rest of the bike, one of the most interesting inventions to come along recently is LiteLok, which has proven in independent testing to be resilient against cable cutters, bolt croppers, cordless drill, hacksaw, freeze spray, and a crowbar. 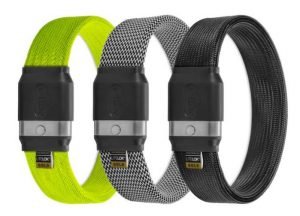 Liteloks can also be combined for a larger loop to get both wheels, but with a folding CHANGE bike, you won’t need more than one…

How are you protecting your bike? 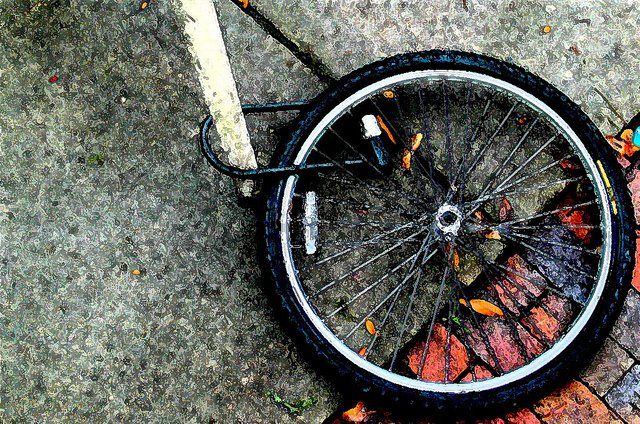