A few weeks ago, I was having a phone conversation with a caller in the folding bike market when he suddenly realized the bikes he was asking about weren’t Walmart-priced. He was polite, but couldn’t get off the phone fast enough, so he could find a cheaper bike.

As I hung up, my thoughts were about what that actually means, engineering-wise. A bicycle in use must respond well to a barrage of repetitive forces from many different directions. Structurally, what do you give up when you optimize for cheap?

Some people, like jamalik on the SimScale Forum, study this topic for fun. He simulated test loads of a typical bicycle under two routine stress conditions:

What parts of a bike get the most stress?

Finite element analysis (FEA) is great for analyzing designs for various factors. The two charts below are about displacement–how much a part each part of the bike moves when force is applied. The hotter the color (red at the top), the more displacement. The cooler the color (with blue at the bottom), the less displacement.

Although these are not technically stress maps–force per unit area–we can use displacement as a proxy for stress. Because displacement is about material flexing and bending, these maps are also a good start for where to expect long-term material fatigue; not a guarantee, since some materials flax more than others, but it’s a good starting place.

Here’s how a typical bike looks during standard riding. 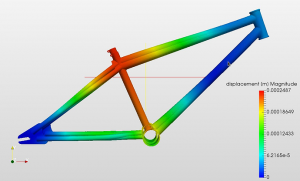 When seated and riding, the most stressful area is the seat tube.

Basically, the stress here is like pushing down on a horizontal straw, except supported by a dual triangles that smoothly disperse the forces. Triangles are important!

But when you’re braking hard, and pushed forward by momentum, the forces on the frame change completely. 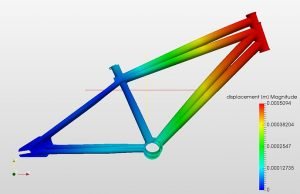 Now the top stress area as shown by displacement shifts to the front of the frame.

Braking increases vertical displacement–how much your frame flexes under a heavy load. It’s not inches as depicted here, but it is enough for experienced riders to notice and appreciate the displacement differences among different frame materials (steel, aluminum, titanium, carbon).

Imagine if you had only one bar in the front, as with most folding bikes, free to flex wildly. Not only does a triangle disperse loads better, but here it minimizes vertical displacement that affects ride quality! 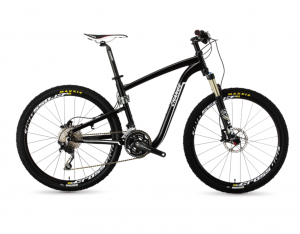 The front triangle of a CHANGE bike is, well… normal.

A standard front triangle in a CHANGE bike leads to less displacement, a better ride, and less chance of a broken frame (and the only ruggedness-certified folding bike in the world).

In the folding bike arena, the closest other bike to this design is Montague, which uses a smaller triangle connected to the top tube. 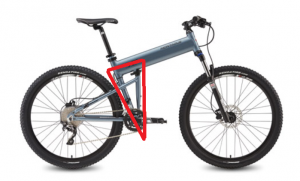 It’s not a big triangle, but it’s something.

Referring back to our two displacement diagrams, this design may be just as good for sitting and pedaling as a regular bike. On one hand, it lessens the seat tube stress by providing a second way for vertical forces to dissipate down. But some of that force also gets transferred to a tube with a hole drilled in the middle! At best, it’s a wash.

All forces causing displacement at the front of the bike must pass through the top tube, which is why it’s so big, beefy, and oval. Maybe that extra mass is enough to counter the extra flex during braking. If so, it still sends all the forces back toward the seat. Does that make a difference? 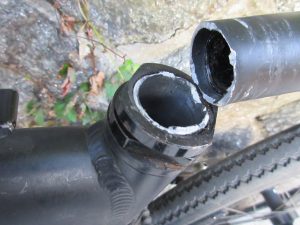 What about “cheap” folding bikes?

When you eliminate that second tube in the front (called the downtube) and don’t provide ANY triangle at all to disperse the forces, anything can and does happen.

As a result, this happens… 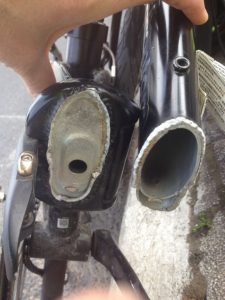 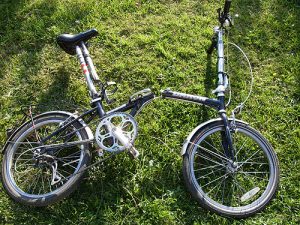 In all fairness, you can save money initially by buying a Dahon or Tern bike. They are among the most popular low-end bikes. But if you are really going to ride your bike, with the feel and utility of a full-size bike, then you’re ultimately looking for an entirely different experience.

The diamond frame is a time-tested, stress-optimized design for the best, most reliable bicycling experience. Don’t settle for less. 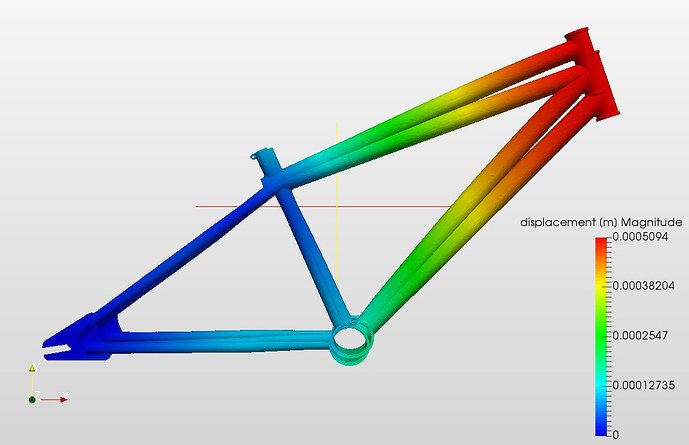