For over 200 years, since German Inventor Karl von Drais created the Laufmaschine–a pedal-less bicycle precursor for walking faster, thanks to wheels–the bicycle has been a hotbed of innovation history. 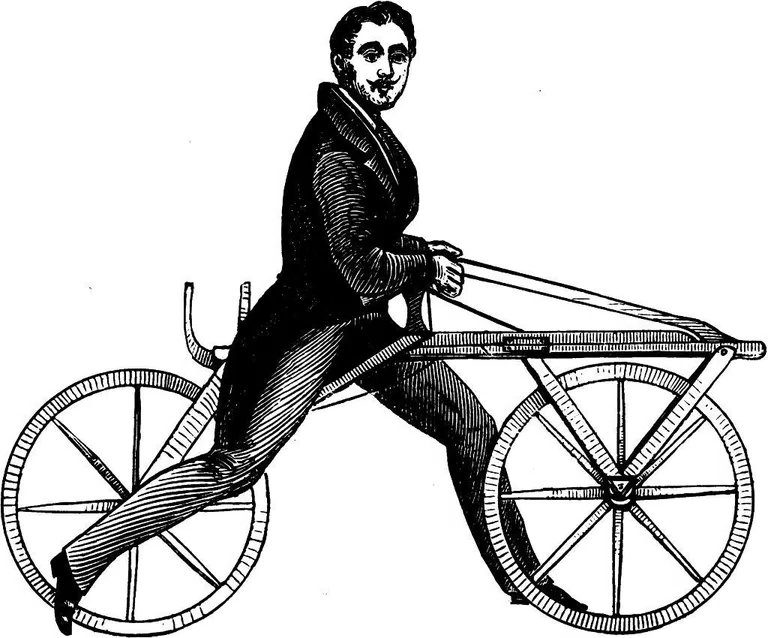 Not elegant, but faster than walking, if you have a large farm to oversee. Also no brakes.

Tucked away in a warehouse area of Pittsburgh is Bicycle Heaven: a two-story collection of 3,000 old bikes. Not just any old bikes, but some of the most iconic, and unusual bikes ever made in the United States. 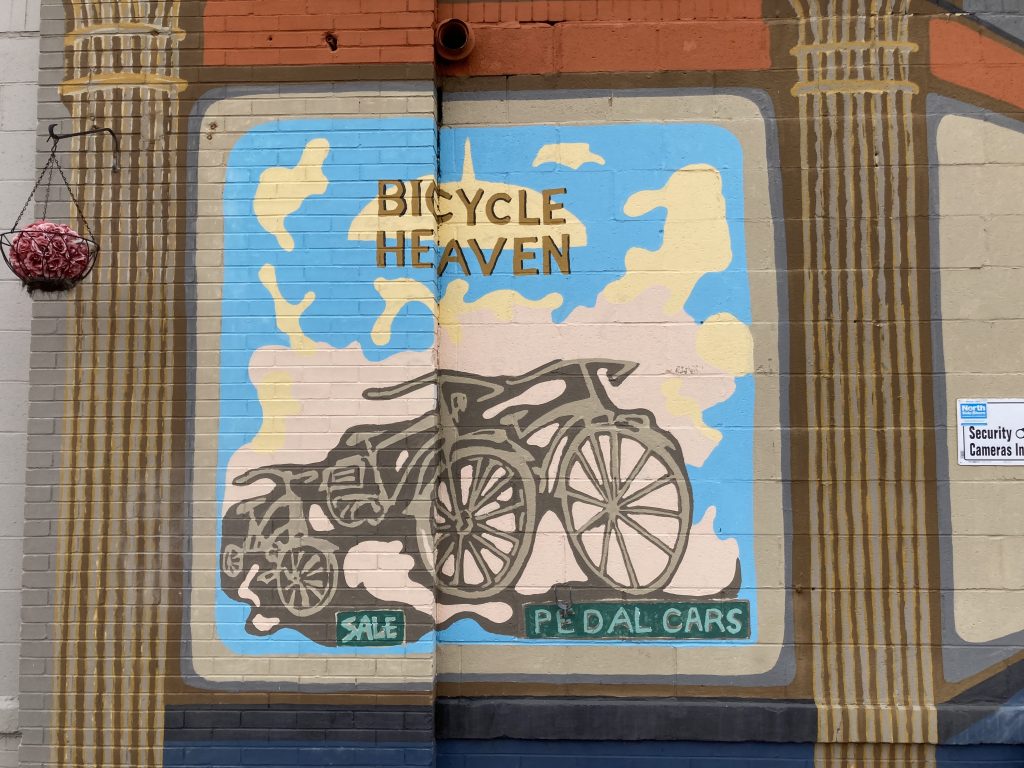 Join me for a history tour of Bicycle Heaven, Pittsburgh’s bike museum.

We’ll go back in time, past the Pittsburgh Police adopting the first e-bikes as police cruisers… 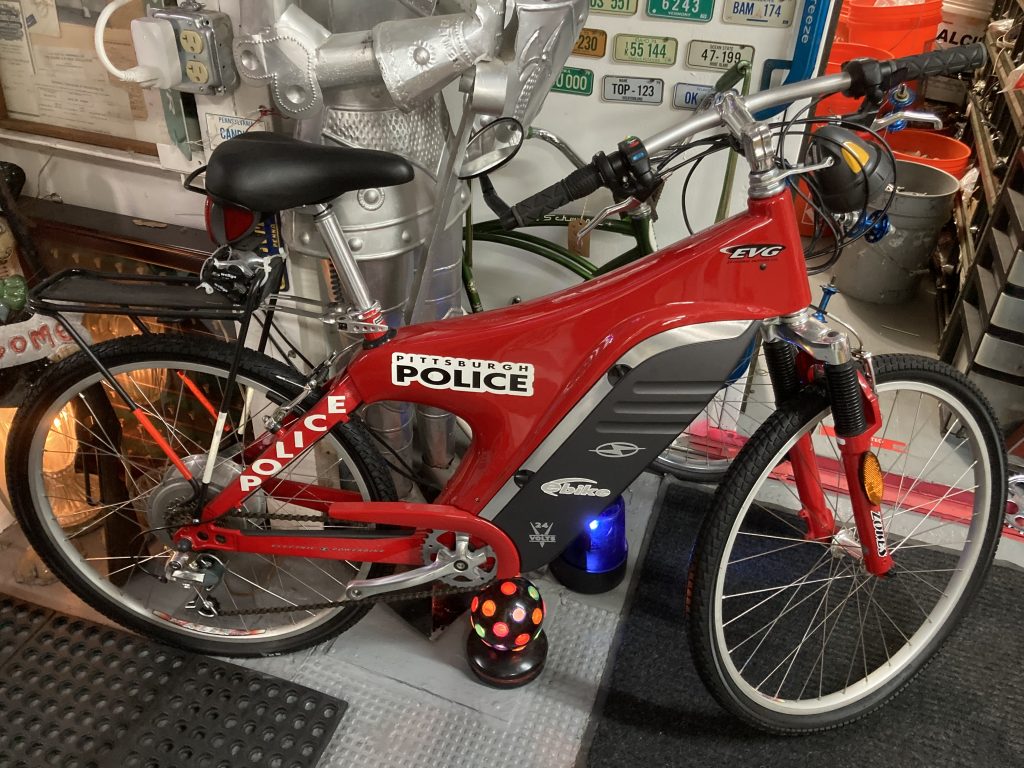 …back to America’s original relationship with the bike–largely defined by another German, craftsman Ignaz Schwinn, who moved to Chicago in the 1860’s. This was a time when youth was defined by the common experience of owning that first Schwinn bike. 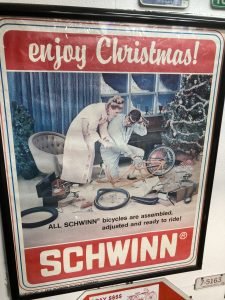 It was a time in history when TV personalities gladly promoted American-built products sold in bike shops. 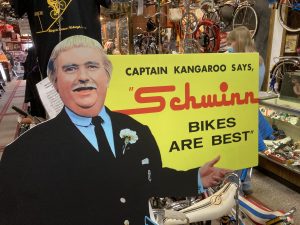 If that won’t make you buy a Schwinn, nothing will.

But we’re going back even further, back to when the very concept of a bike was up for discussion. Was it step-over sized, like the original Laufsmaschine, or tall and efficient per pedal revolution like the big-wheeled penny farthing, or step-over sized and efficient like the first chain-drive bikes? 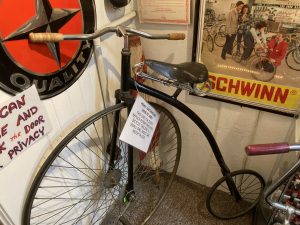 The penny farthing actually had a short life in the US. We were full of other ideas… 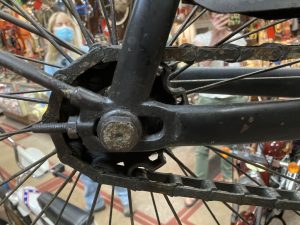 …like what can you do with a chain, now that you don’t have to balance on such a large wheel anymore?

Once you’ve got power going to the wheels, and the pedals aren’t directly connected to the front wheel tricycle-style, then a whole world of bike-powering options opens up. Like . . . do we even need to use legs? 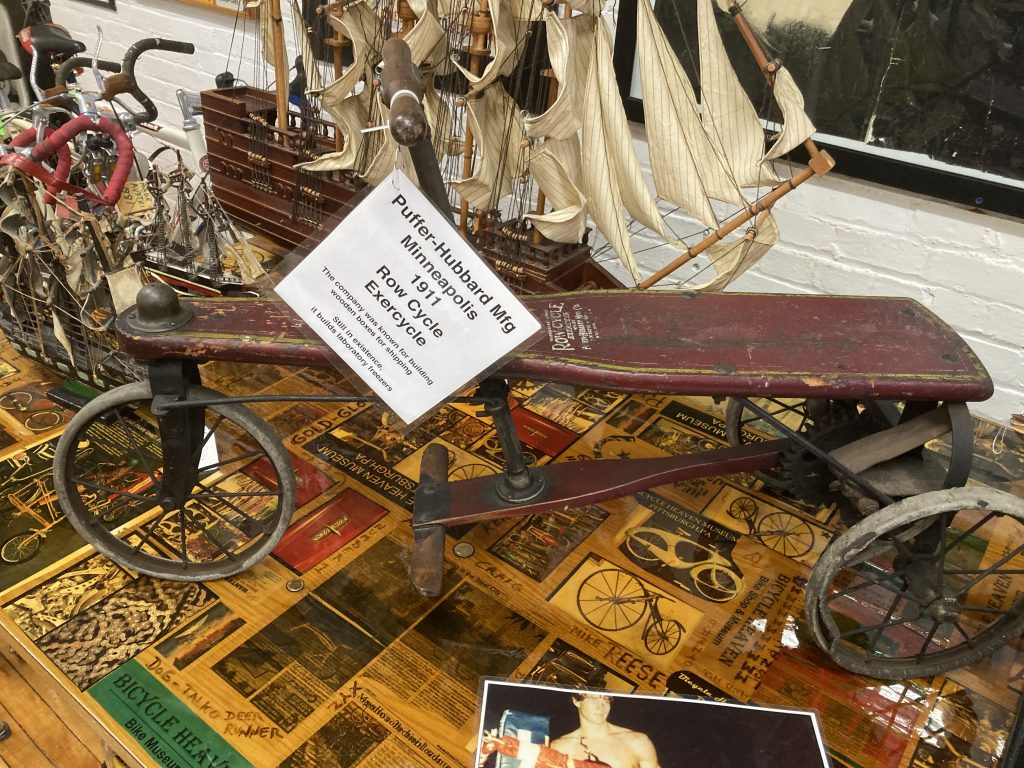 This 1911 Puffer-Hubbard Row Cycle out of Minneapolis used the rider’s whole body for propulsion.

Or, if you are using just your legs, do you really have to use them just one at a time? 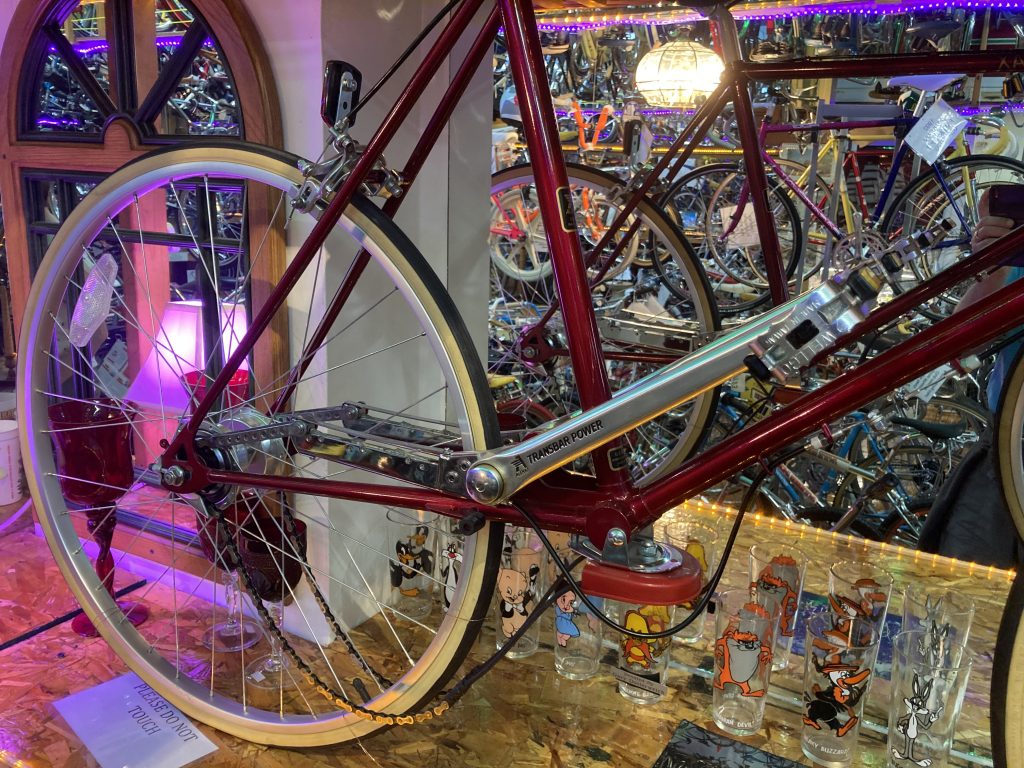 This bike featured use of both feet at the same time—the strangest use of a bike chain I’ve ever seen.

And…have you ever thought this? How about pedals that don’t move at all? Just convert all the energy of this bouncing seat into forward motion… 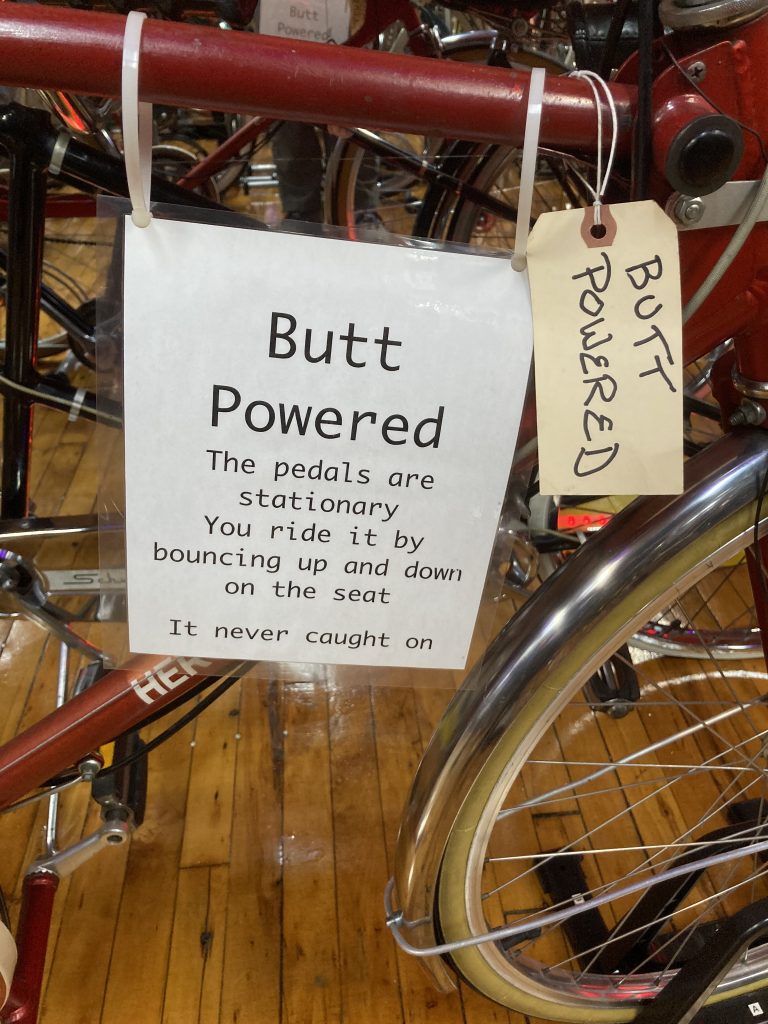 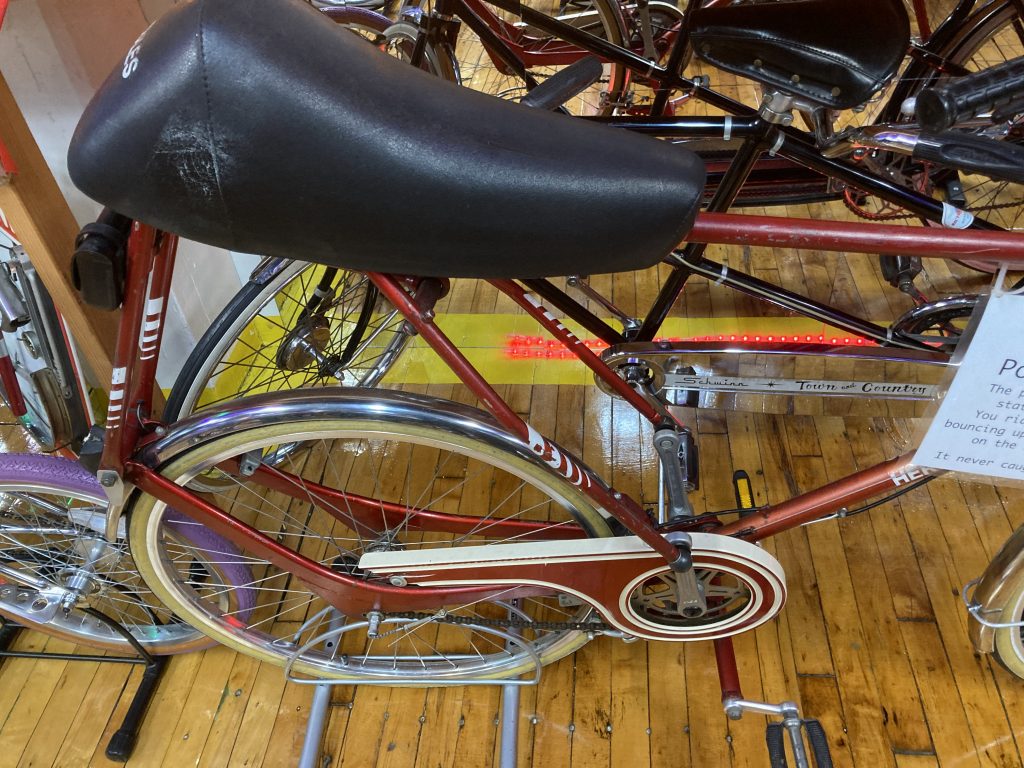 It didn’t sell. But an A for creativity, though.

As strange as these ideas were, propulsion wasn’t even the area where bike concepts diverged the most. How you control the bike was even more ripe with creativity.

Like brakes. Remember, as a kid, using the “sneaker brake” system that stopped your bike but left your mom shaking her head at how quickly you wore through new shoes? This is the industrial version of that. 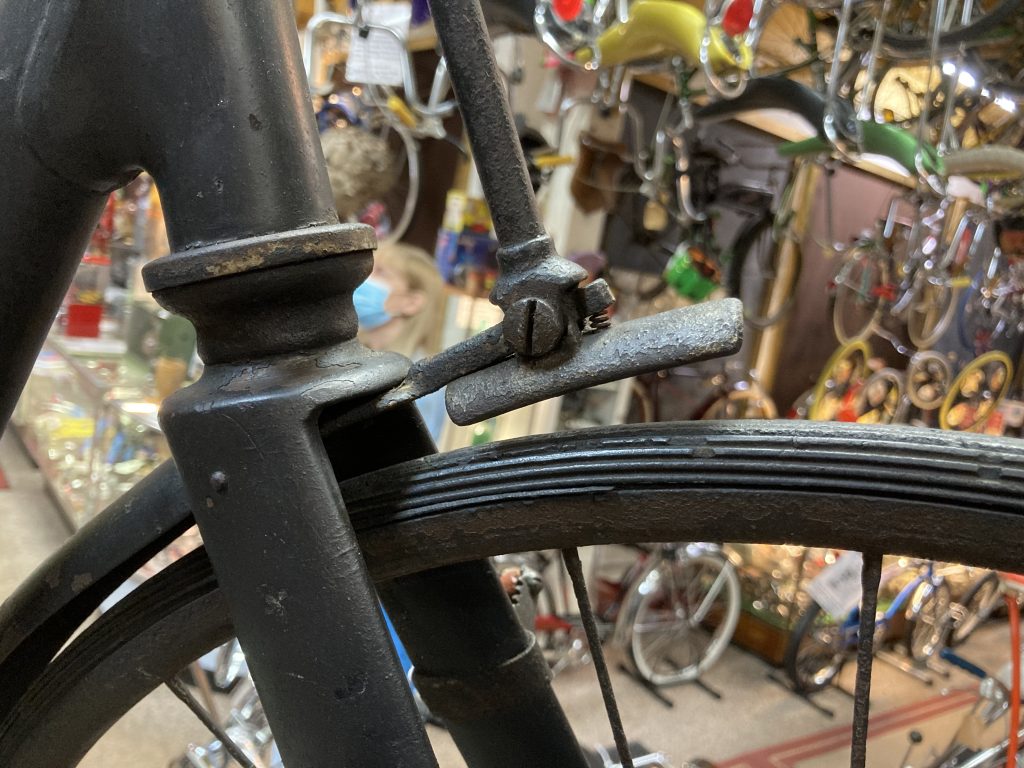 Or shifting. That’s a big thing in sports cars. Why shouldn’t it be a big thing on sporty bikes? 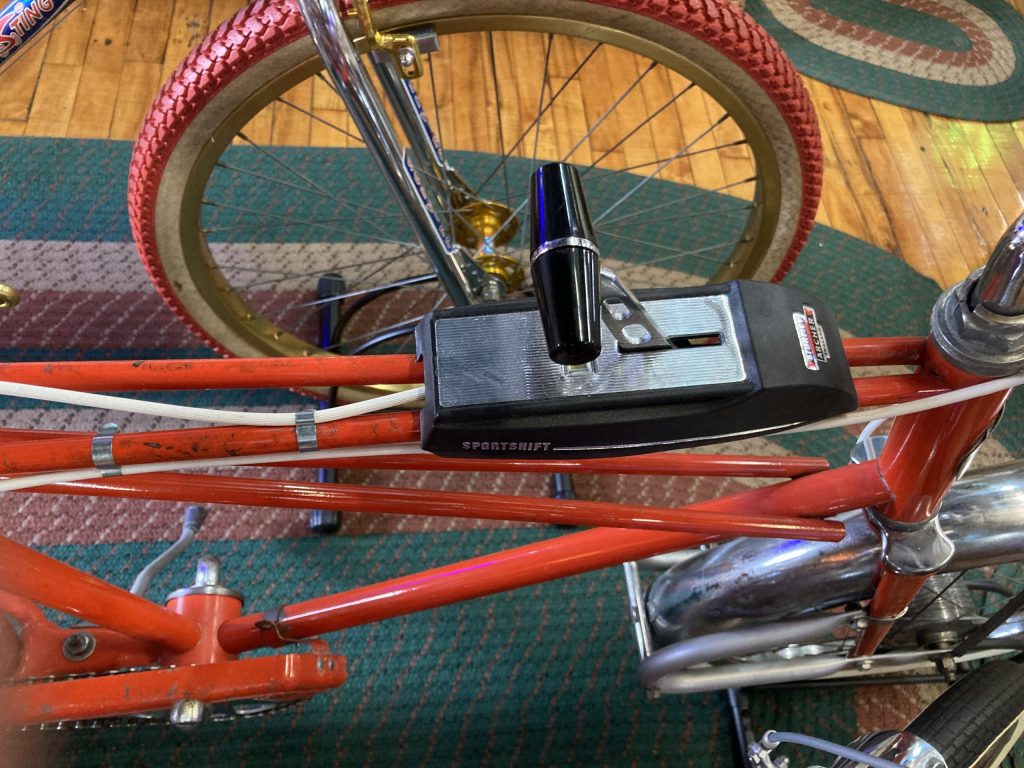 That’s some big shifting there, Sport.

You know what else is big in cars? Steering wheels. Wait for it… 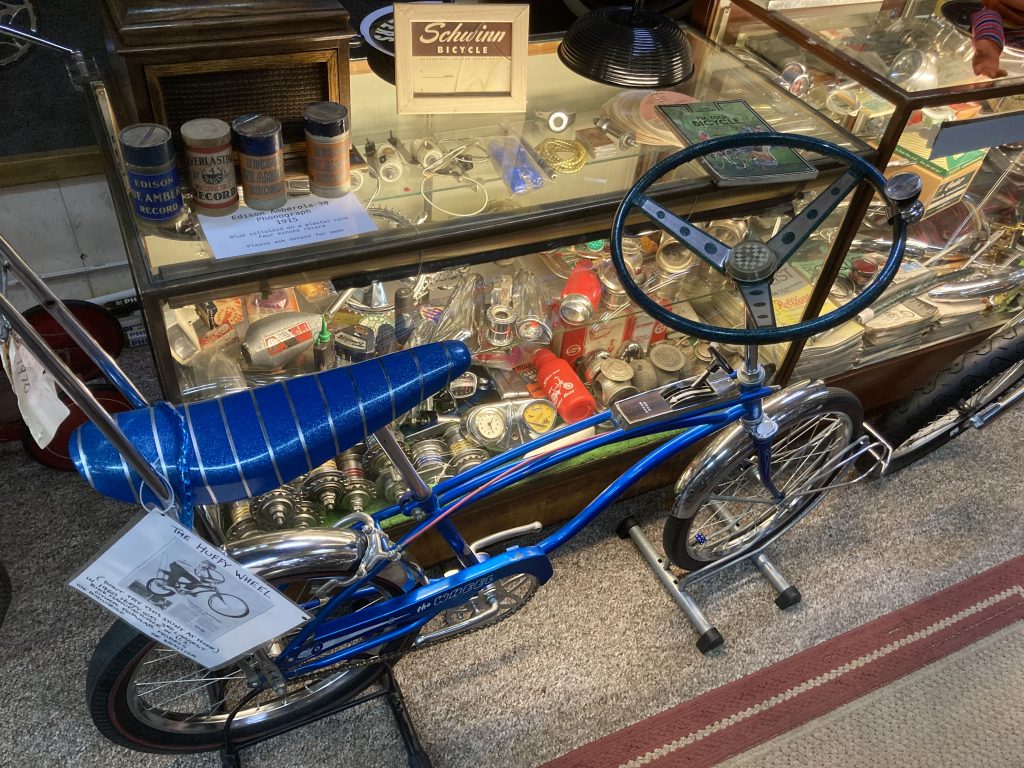 Yup. Bicycle steering wheels. They were a thing too, going along with the car shifters. Apparently, when you’re already sitting on a banana, anything goes!

Huffy certainly was rolling out the car-driven bike innovations to try and pass Schwinn. How about building in an entire car radio, tubes and all? 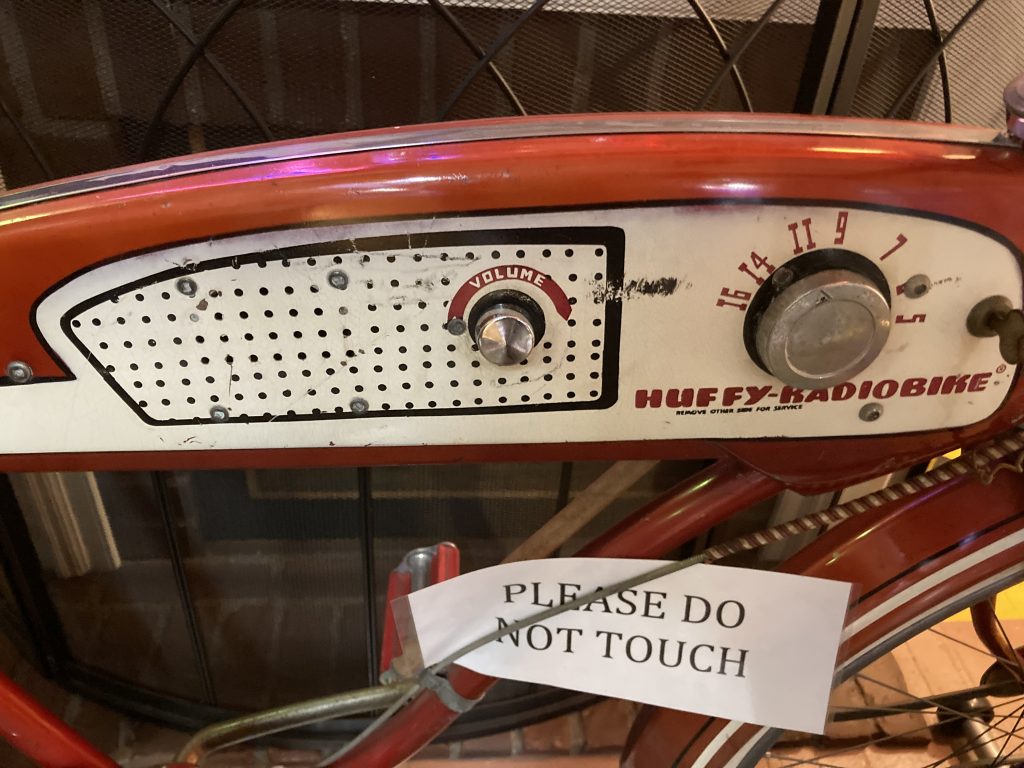 What powered it? A big battery? Was this the first e-bike?

Know what’s bad for metal-filament radio tubes? Road shock. Actually, that’s hard on your whole body, too. So it seems everyone was focused on reducing it. This was an early approach. 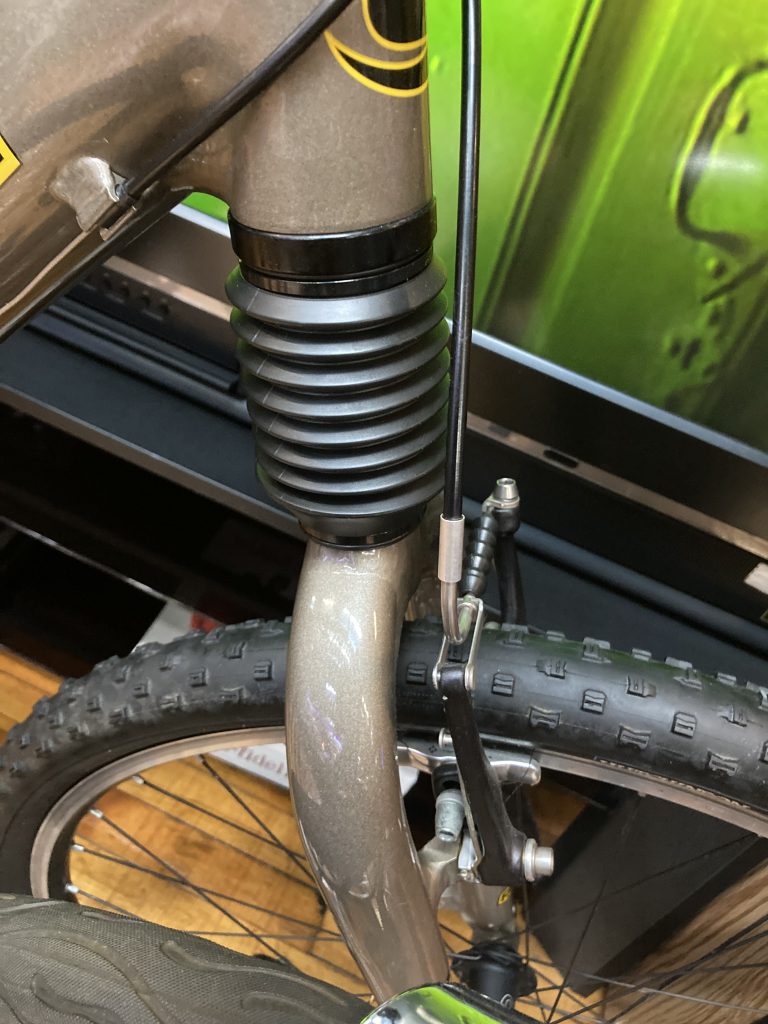 I’ve actually seen this method on some Chinese import bikes, but don’t actually know how it works. If the top of the fork goes through the top of the frame, doesn’t this just transfer impact to the handlebars?

These shocks are from the motorcycle world and a precursor to modern mountain bikes. 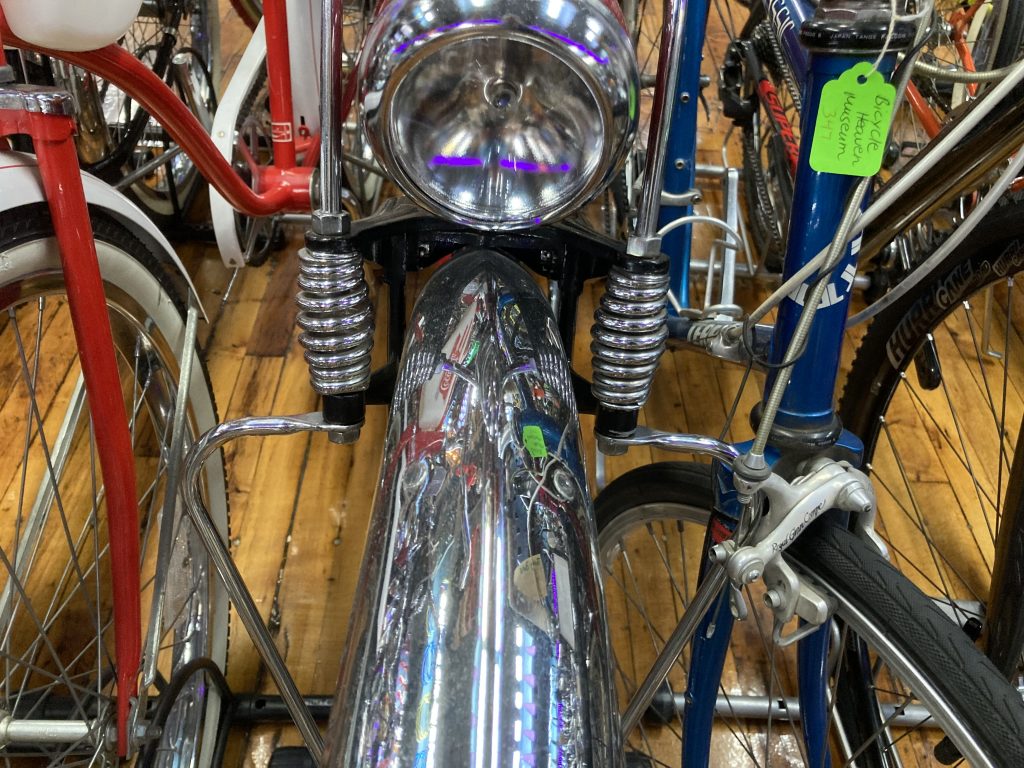 If it comes from the motorcycle world, why does this give me 1930’s Duesenberg vibes?

Speaking of the motorcycle world, this whole Schwinn bike looks like a motorcycle. It definitely wins the award for the most shock absorbers, and interestingly has a set up near the bike basket–shocks specifically designed to reduce the shock of a forward impact, like when you hit a curb. Cool! 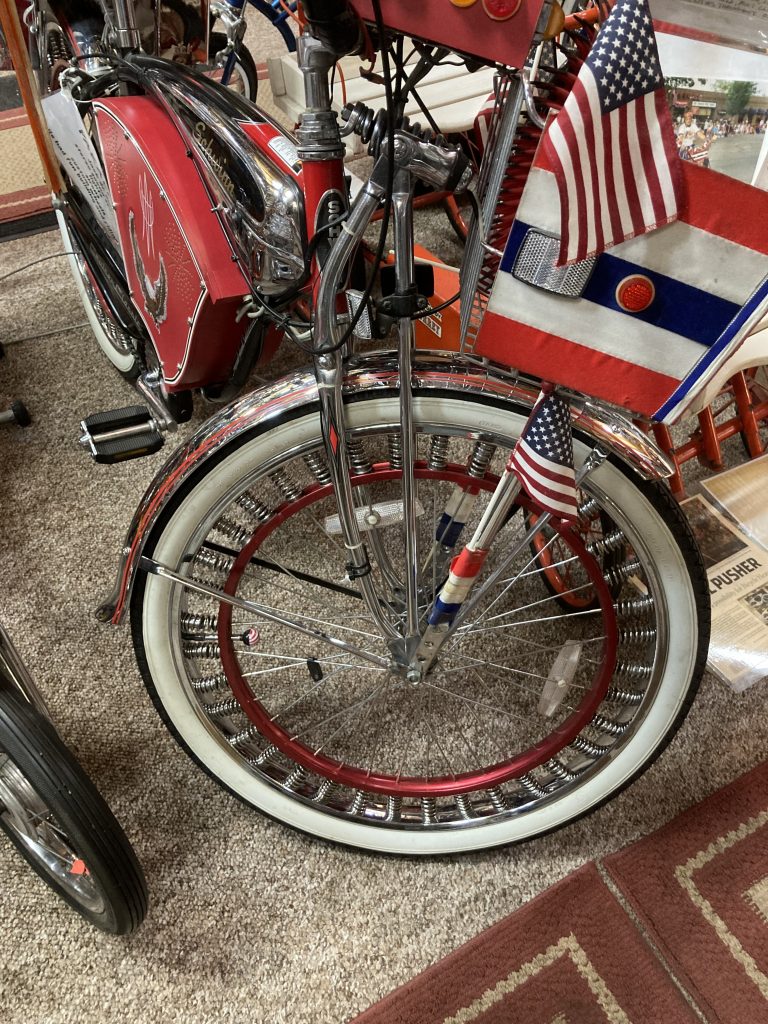 Oh… and it’s built in America, in case that wasn’t quite clear.

Here is a refined version of the hit-the-curb shocks, on a swoopy 1950’s era Schwinn black Phantom with built-in fender lighting. The handlebars were extremely wide and, while turned sideways now to save space in the museum, there was no way to do it quickly then like there is today with a THINstem folding stem. 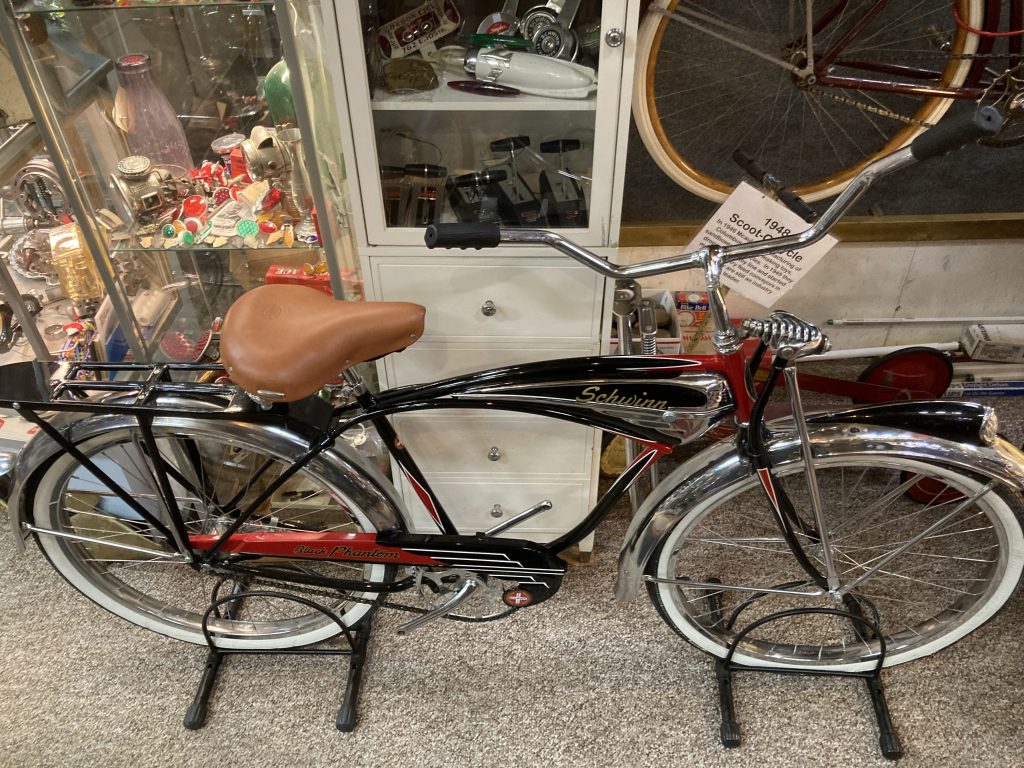 Even the chain protector had a wing motif to show how fast the bike could be. Very stylish.

When style was king.

Remember when cars had those big rocket-like tail fins in the 1950’s? No real reason for them except to add modern style points? Bikes went through that same phase in history… 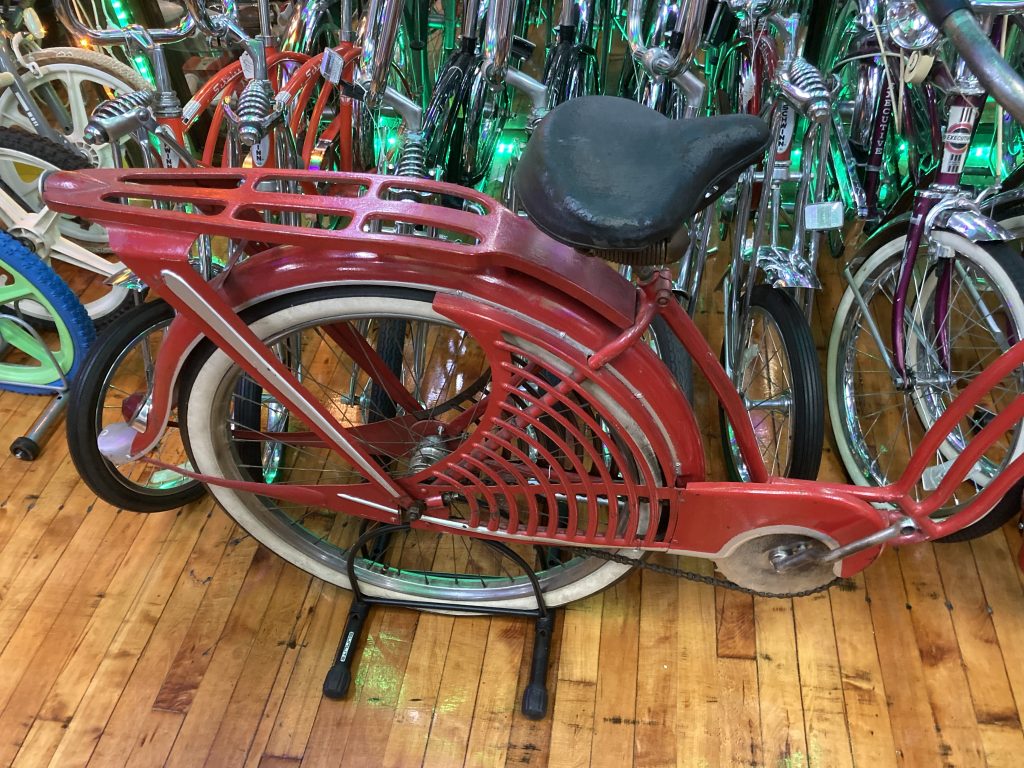 …complete with a tail fin.

The 1951 J.C. Higgins Colorflow took fins a step further with front lights on a flying wing, rear lights in a dual tailpipe arrangement, and . . . landing lights on the side? 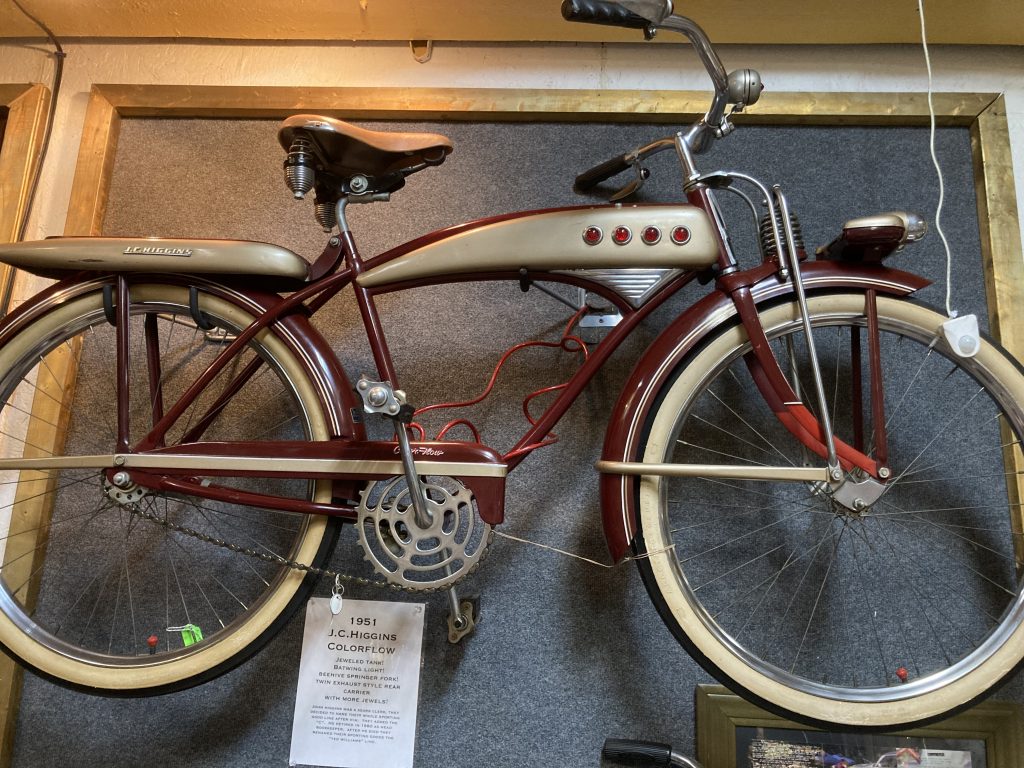 If the Wizard of Oz had been produced in the 1950’s, this would be the perfect flying bike.

But perhaps no bike captures the merge of biking and flying as much as the Bowden Spacelander. Yes, that’s the real name. And the bike didn’t just exude automotive design heritage; this designer had a track record! Ben Bowden had a long career in creating military vehicles, the 1955 Thunderbird, the Mustang, oil in quart cans, and the one-piece shower stall. What’s a bold bike design after all that? 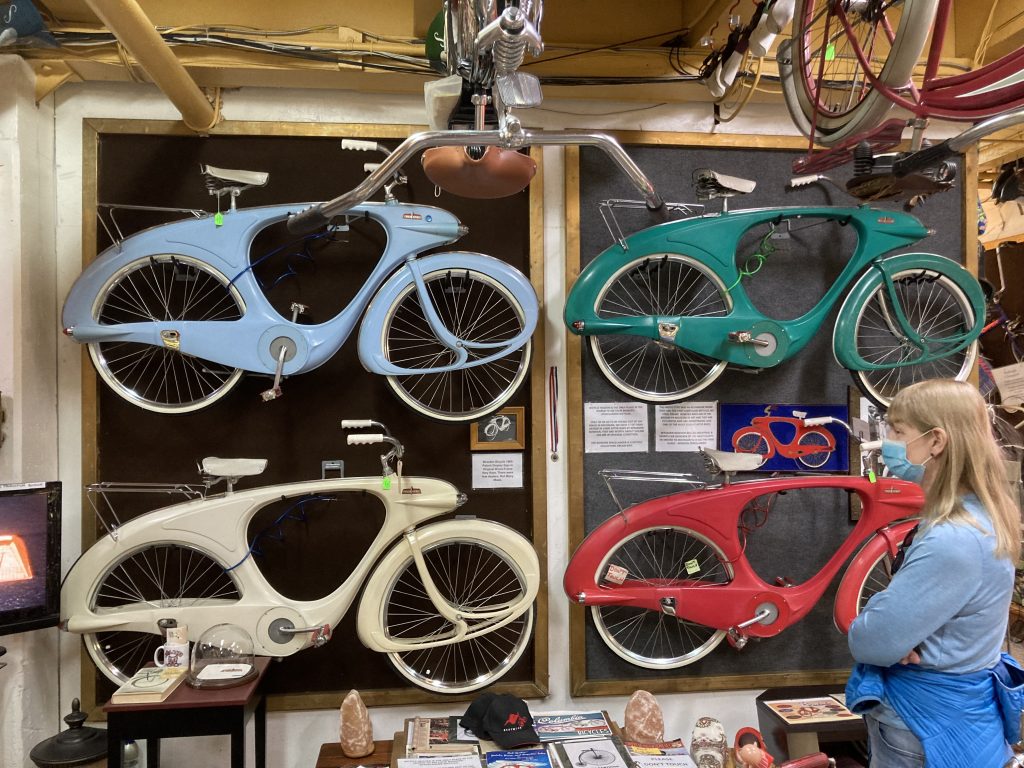 It came in 7 bold colors, including Outer Space Blue.

The Bowden Spacelander was built of fiberglass, and if you know what it’s like to lift a canoe, you know these were heavy. But that didn’t stop them. Instead, the company folded when women sued Bowden for injury by his vibrating chairs. What a strange world. And… does anyone else think these bikes look like cicadas? 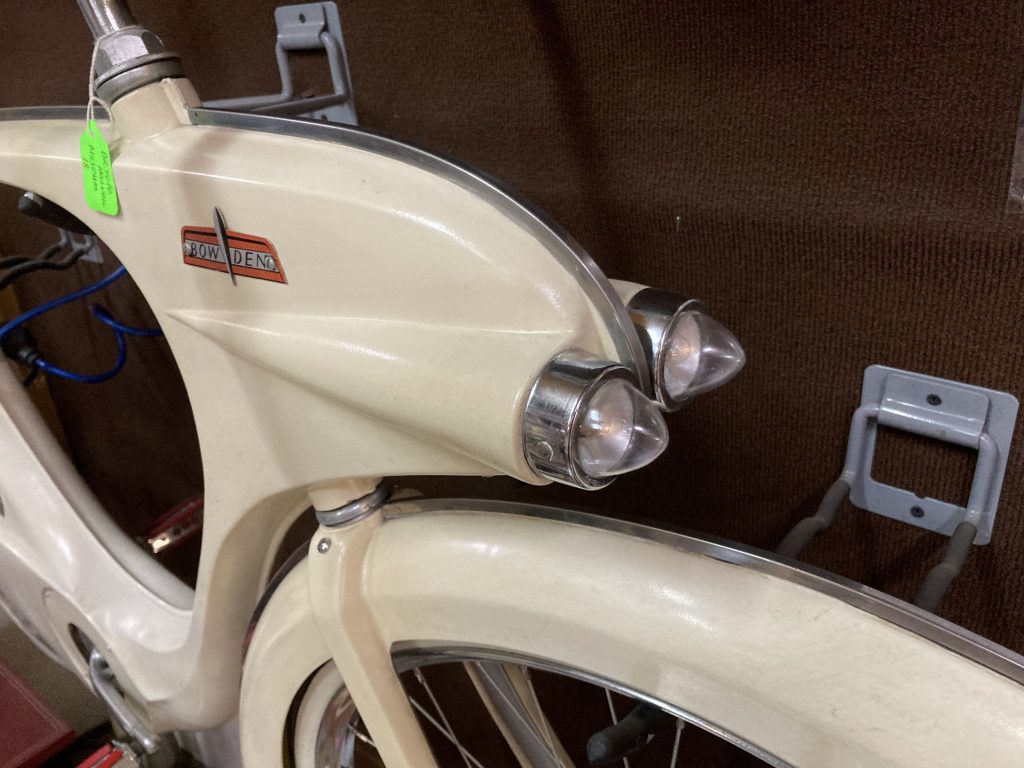 Back to the future?

Are there clues about the future of biking hidden in the past? As far back as 1980, Volvo was experimenting with a plastic bike, which it sent to the Caribbean to resist salt. Plastic is way too flexible for a quality bike, and not part of the future of bike design…until you add carbon fibers, and then it’s a modern-day material. 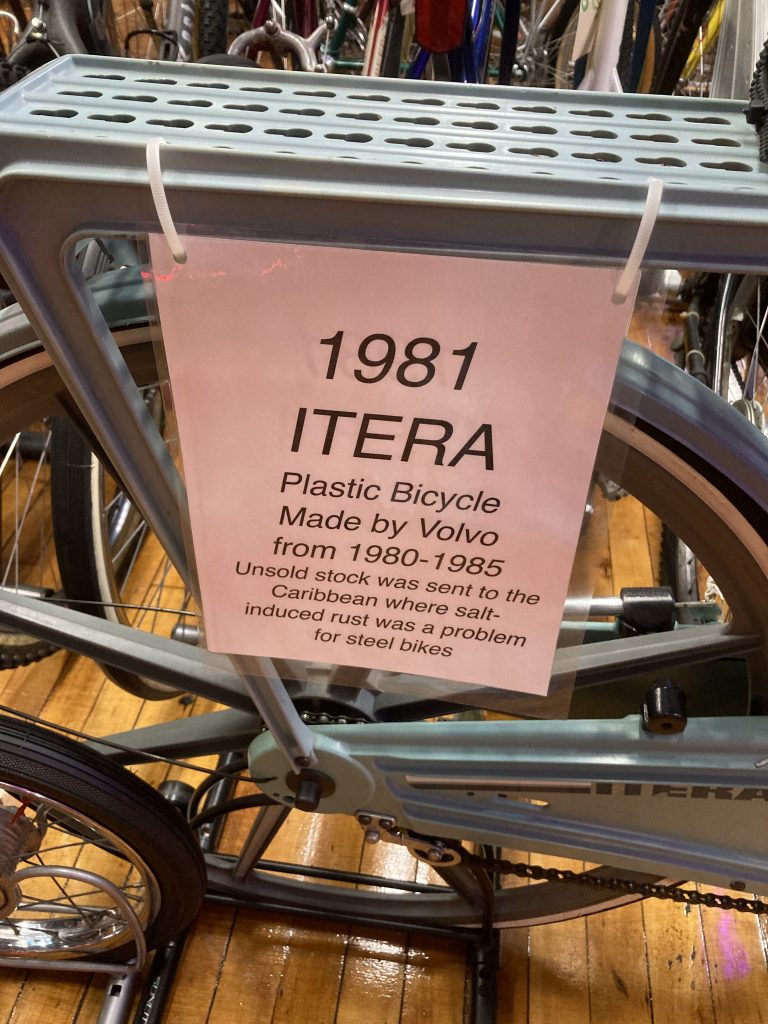 How about wood? Is that bike material from the original Laufsmaschine also part of the direction bikes are heading? I can see it now… 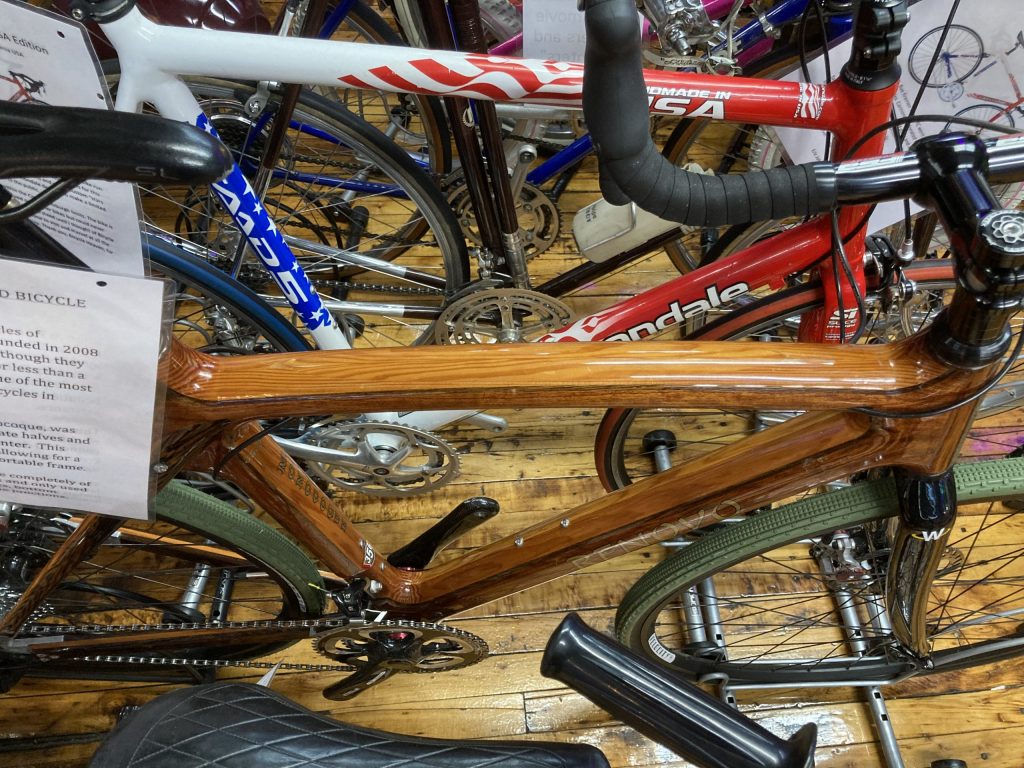 …Sustainably-sourced bikes, with warm natural grains and impeccable workmanship in a variety of custom sizes. Perfect for your next bike.

What do you see in biking’s past that should make a comeback? Airless tires that never get flat? Hit-a-curb type horizontal suspension? Stylish bikes modeled after cars and rockets?

Just as importantly, do you feel that bike innovation is alive and well today, or has it slowed down in recent decades?

If you want to see more of this amazing bike history museum, you can tour it virtually. (Remember to look up too, so you don’t miss all the bikes on the ceiling!) 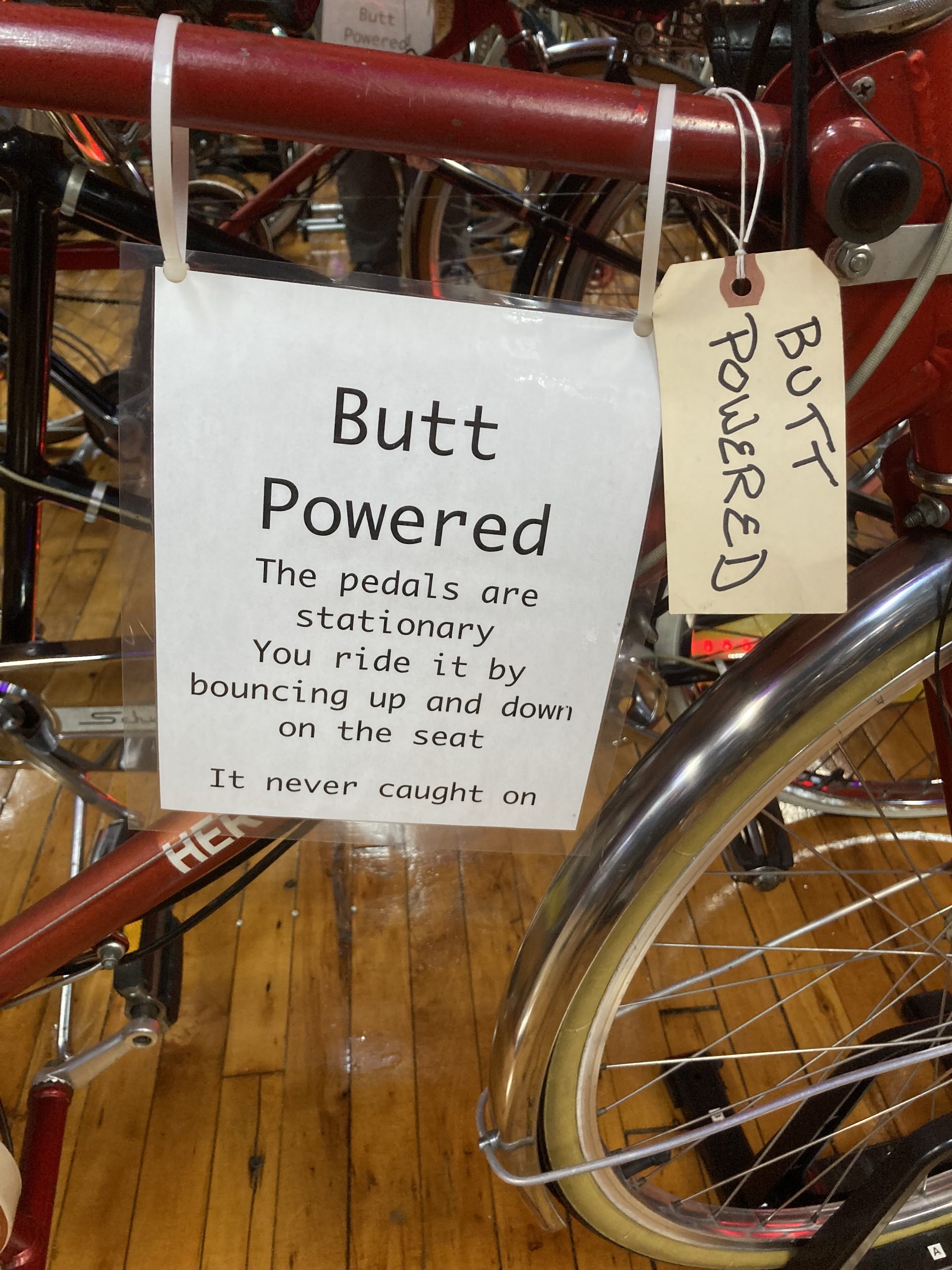