Why every trucker needs a bike–and where to put it.

Think your job involves a lot of sitting? Try being a long-haul trucker. You’ll spend 10+ hours in the same seat all day–then at the depot, while your truck is unloaded, you get to sit again in the vending machine room. And then sit again at the local diner. 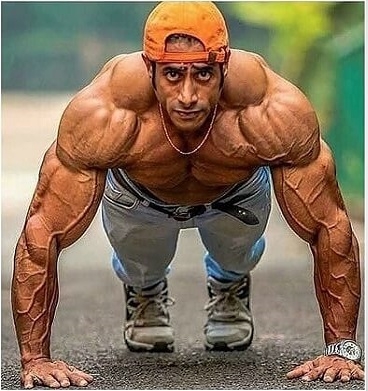 …but truckers have another secret weapon to stay in shape after all that sitting. 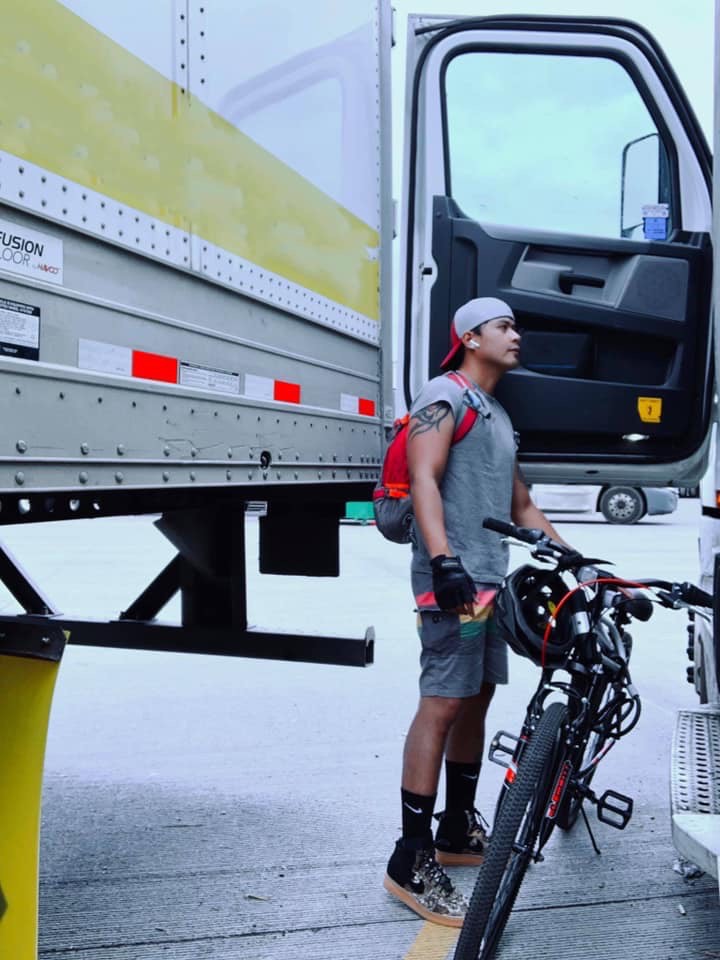 Just get on a bike and enjoy the freedom and cardio.

While there’s universal agreement that hauling a bike is a good idea for a trucker, even as just a way to break free from the cab and make a convenience store run without messing with parking, there are four open areas of discussion.

Truckers, unlike most drivers, operate under two sets of rules. The first, if you’re leasing your truck, comes from the fleet manager; modifying the truck in any way is usually a No No, even if it’s well intended. The second comes from the Department of Transportation, which can inspect and issue tickets at weigh stations for unsecured loads. As one veteran explains:

“I have seen many bikes on trucks. To do it right you should install a bike rack on the truck because bungee’s are not load securement in the eyes of the DOT. I also saw a fold up bike on a truck. Very cool.”

So don’t ever use bungee cords. But is installing a bike rack an allowable modification? Check with your fleet manager…first!

2. Where will your bike go? 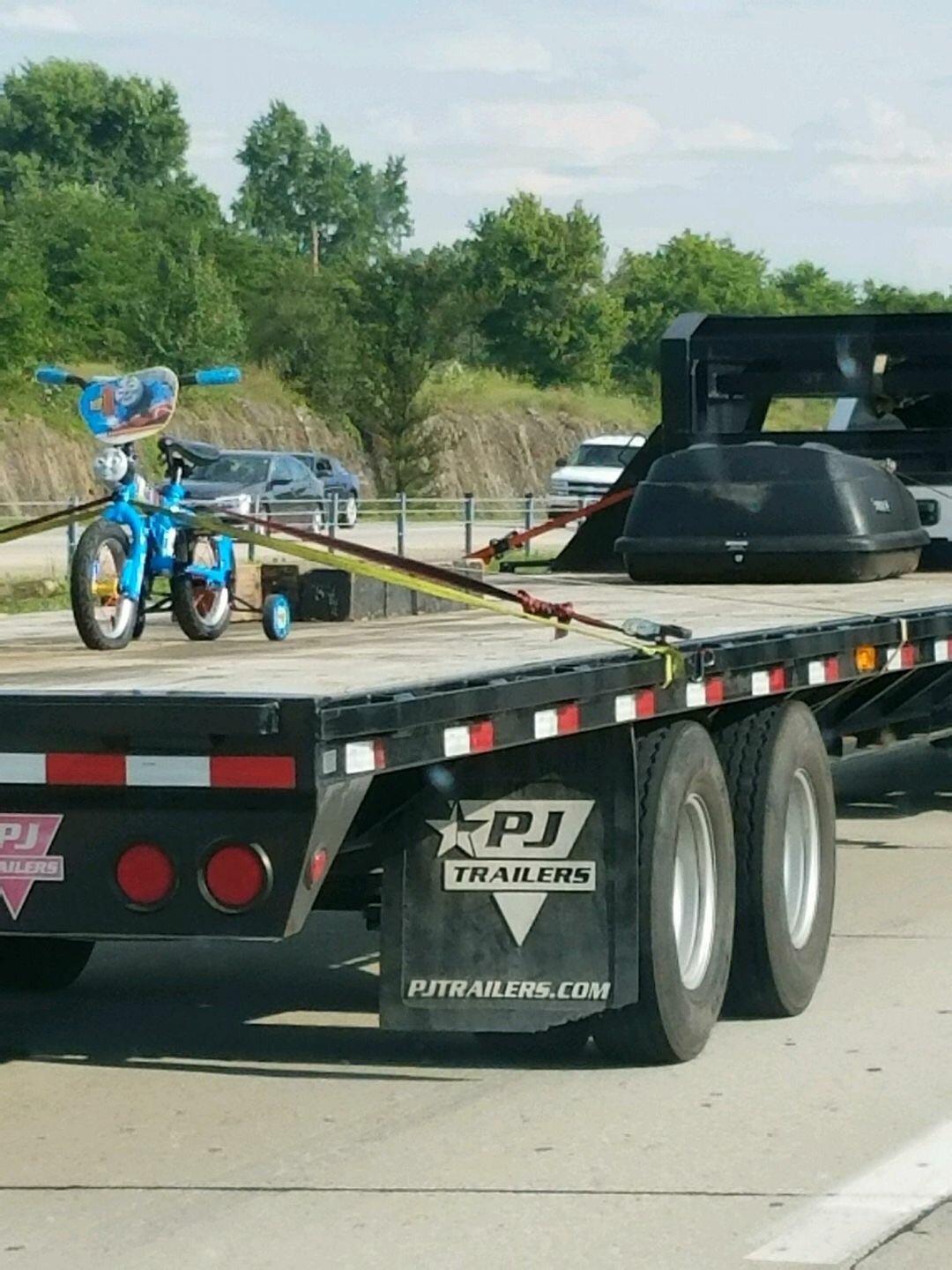 Unless you’re new at this, you’re not going to mess with your load. Never on the flatbed, never inside the trailer. 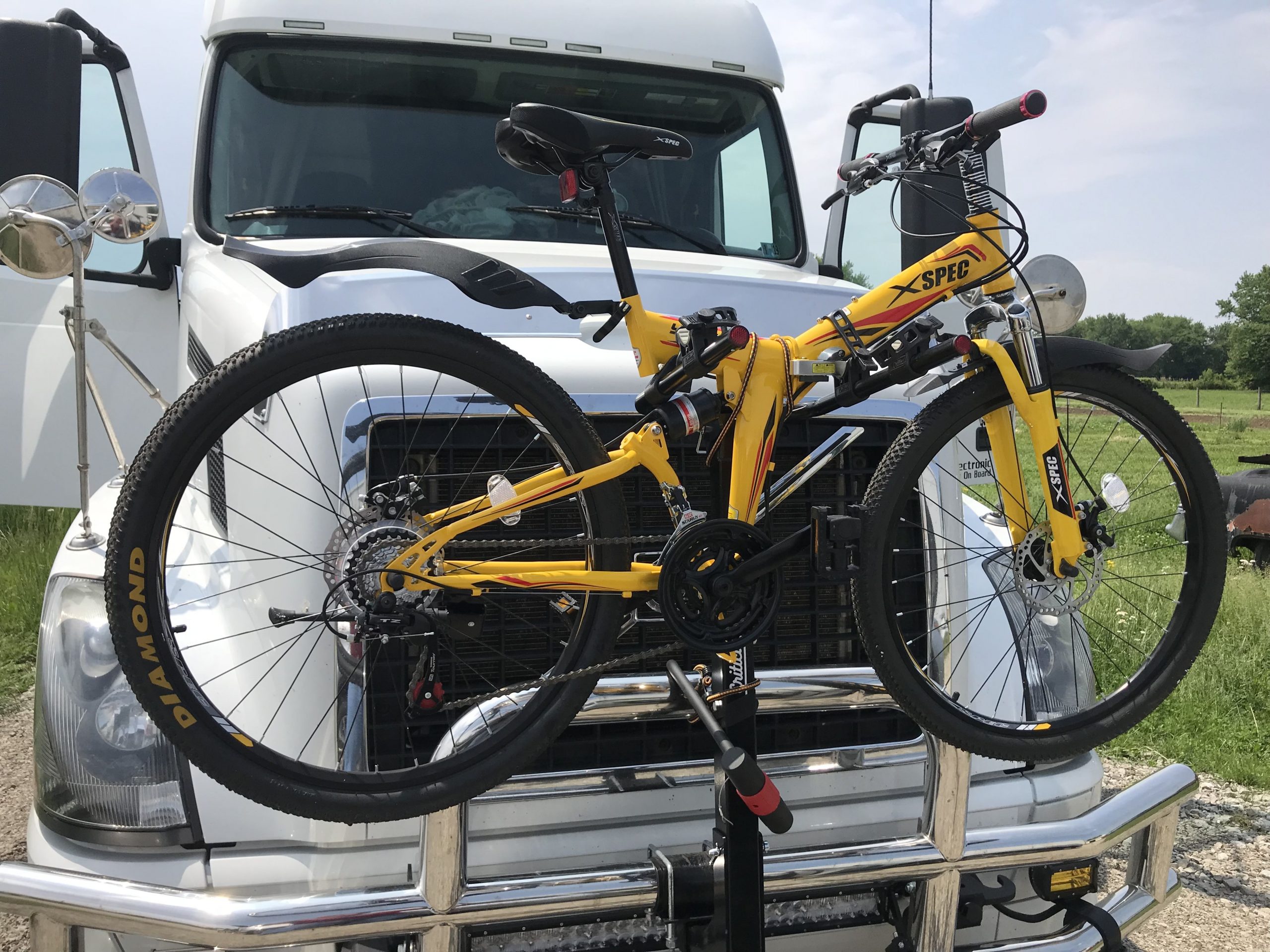 Similarly, while this looks shiny and cool and makes a statement, front-load position is not recommended. (And this bike even folds for storage. Instead, it’s being used as a bug shield for the truck???)

Why not keep have a bike on the front, where you can see it? Who better to answer than a trucker…

“Bugs, road film, sand getting into the shifters, sandblasting the finish….you’d spend an hour cleaning before every ride.

Carrying a bicycle outside of a truck, uncovered, would destroy it in months.”

“Freightlinerbob” in the Truckers Report forum

Not only is the front where most of the bugs splat, but you’re only getting 6-8 mpg anyway; why make it worse?

Ride held mostly securely with chains and straps. You’re not going to lose that bike… but how much effort is needed to get it down for quick use?

Keeping your bike behind the cab, as long as it’s out of the way of a turning trailer, keeps the bug juice off. But it still exposes your bike to road grit, rain, salt, and rust–all of which both make your bike nasty to ride and shorten its lifespan.

In the words of a veteran trucker…

Wait… Bungee cords??? That’s not even DOT-legal! And what’s the difference in price between a succession of trashed cheapo bikes that fail and one good folder that you can always rely on? This whole approach needs re-thinking for safety, convenience, and saving money.

3. Does a folding bike make sense?

Folding bikes are a bit more pricey than cheapo bikes, but they get small enough to put away in the cab.

Most folding bikes aren’t rated for heavy riders, but under the right conditions, they still can be a popular alternative as a lasting alternative (and possibly cheaper in the long run)…

“I had a cheapo bike on the back for a while. It was destroyed in no time, though, because of weather and all the bouncing around. So I spent the big bucks for a folding bike. I keep it in the passenger side floor area, which works for me since I’m solo and always will be.

If you do go with a bike outside, I suggest installing a rack (if the company will allow it – or is your BF O/O?) to keep it from banging against the truck all the time and covering the bike up to keep it out of the rain and salt and road grime. I’ve seen lots of drivers who just throw their bikes on the back of the truck any which way, but I can’t figure out how they keep it good condition.”

Of course, that’s if you treat it like a folding bike and bring it inside. This interaction got laughs…

“I have a Bike Friday (folding bike that fits into a suit case). I wrap it in a small tarp and strap it under a flatbed. It takes about 20 minutes to set up and similar to put away. Sometimes I have carried a bike on top of the trailer but it gets road dirt and moved often at shippers and receivers.”

Ultimately, if you’ve already invested in a folding bike…Then…Fold…It. Put it away in a non-gritty, not-salty, totally convenient place, so you can pull it out frequently for easy use. 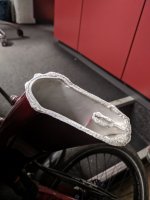 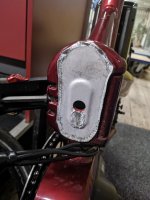 What’s even better than a folding bike?

A full-size folder is designed first for great riding, with no pothole-sized 20″ wheels or frame weaknesses that can be especially dangerous for heavy riders. And then it folds in half, in a certified secure way. CHANGE folding bikes have passed European ruggedness standards (EN-14766) and international standards for MTBs (ISO-4210).

So ultimately, you’re not limited to the choice between a possibly weak folding bike and a full-size mountain bike. The CHANGE bike below is a full-size folder, easily rated for riders over 380 lbs. 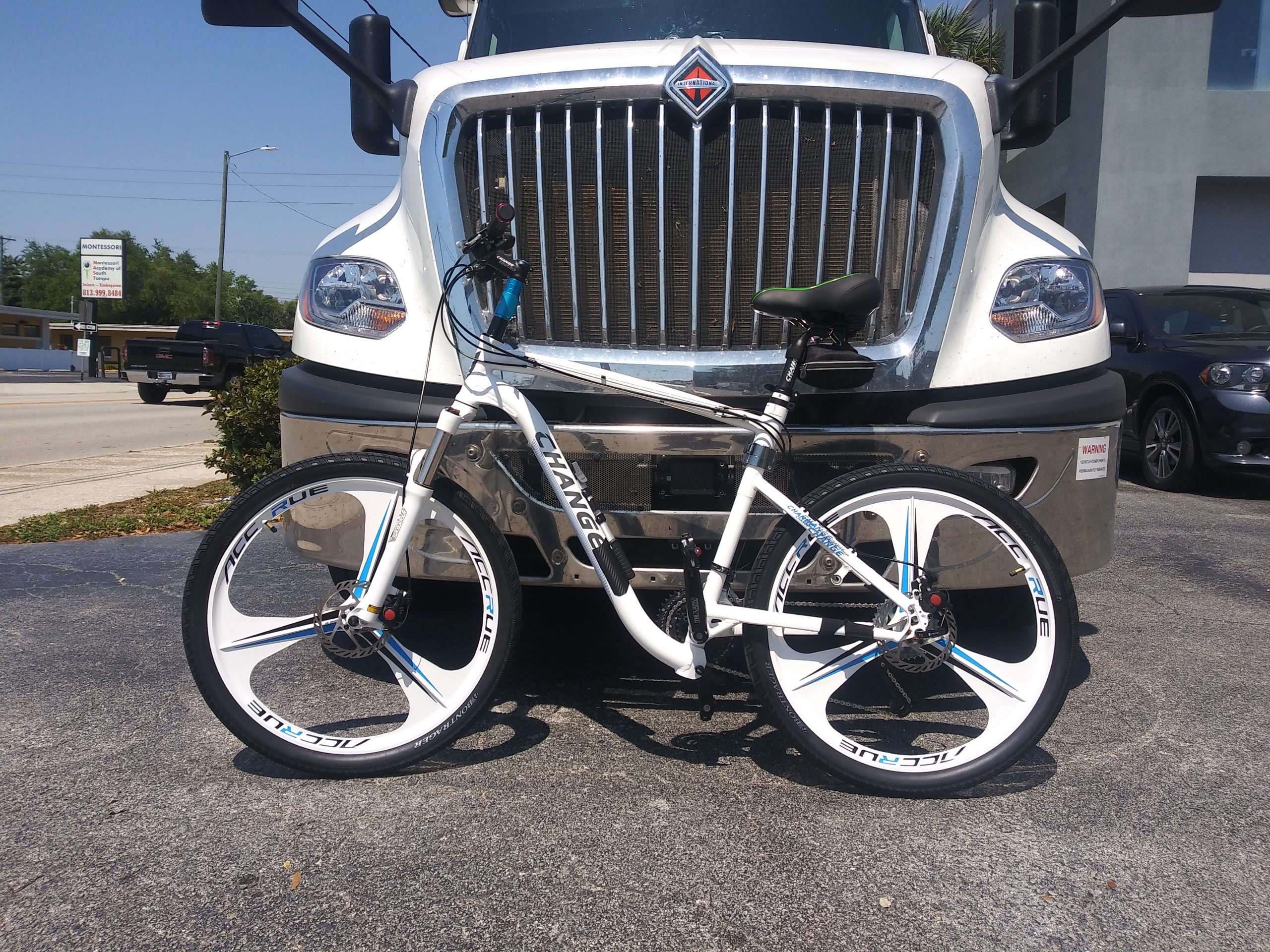 It’s also heavily customized to go better with his truck, but when your bike rides safely in the cab, and lasts longer as a result, you can do stuff like that.

Out of the box, a CHANGE 809 urban MTB full-size folder looks like this… 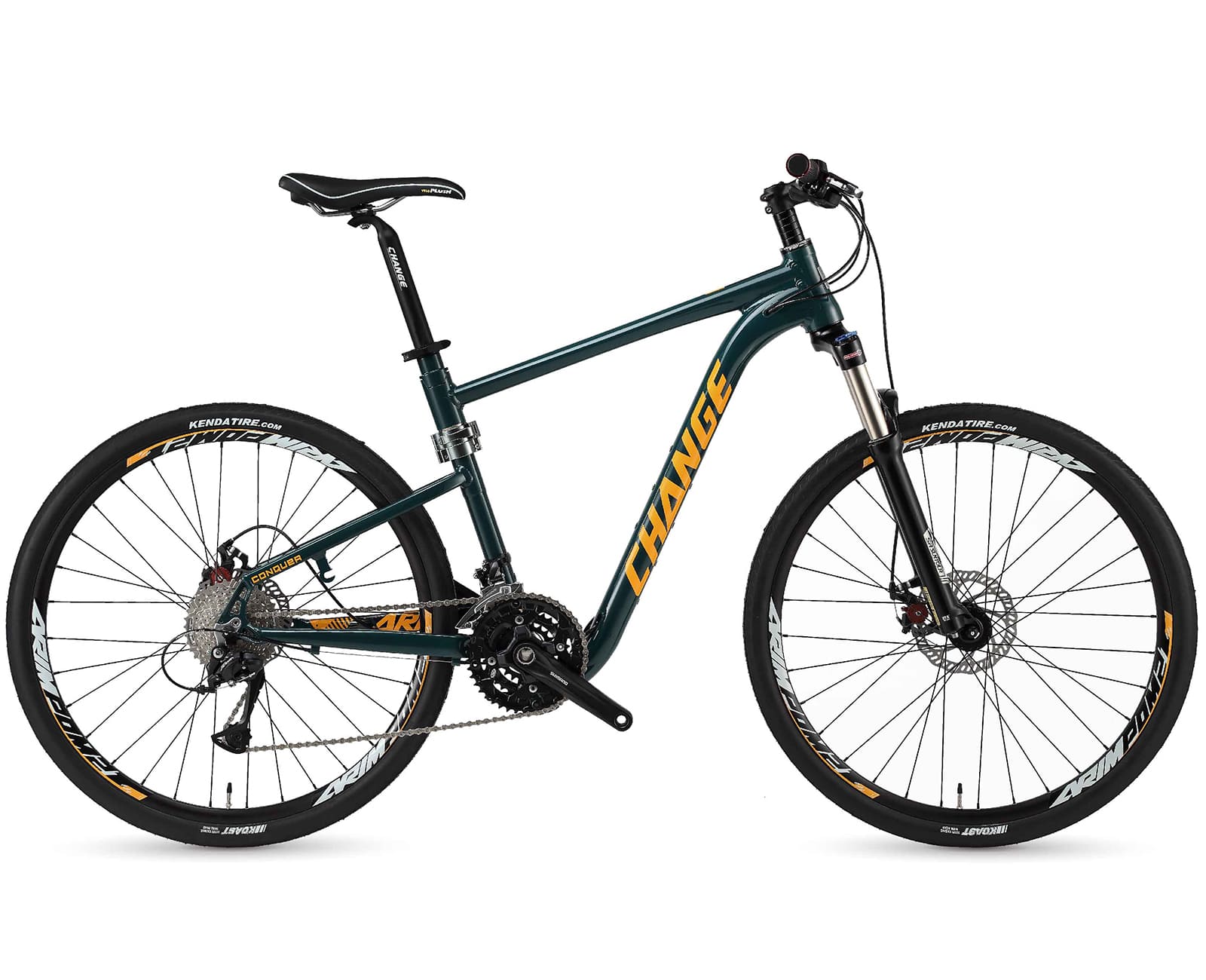 …and then folds in half in under a minute to look like this. 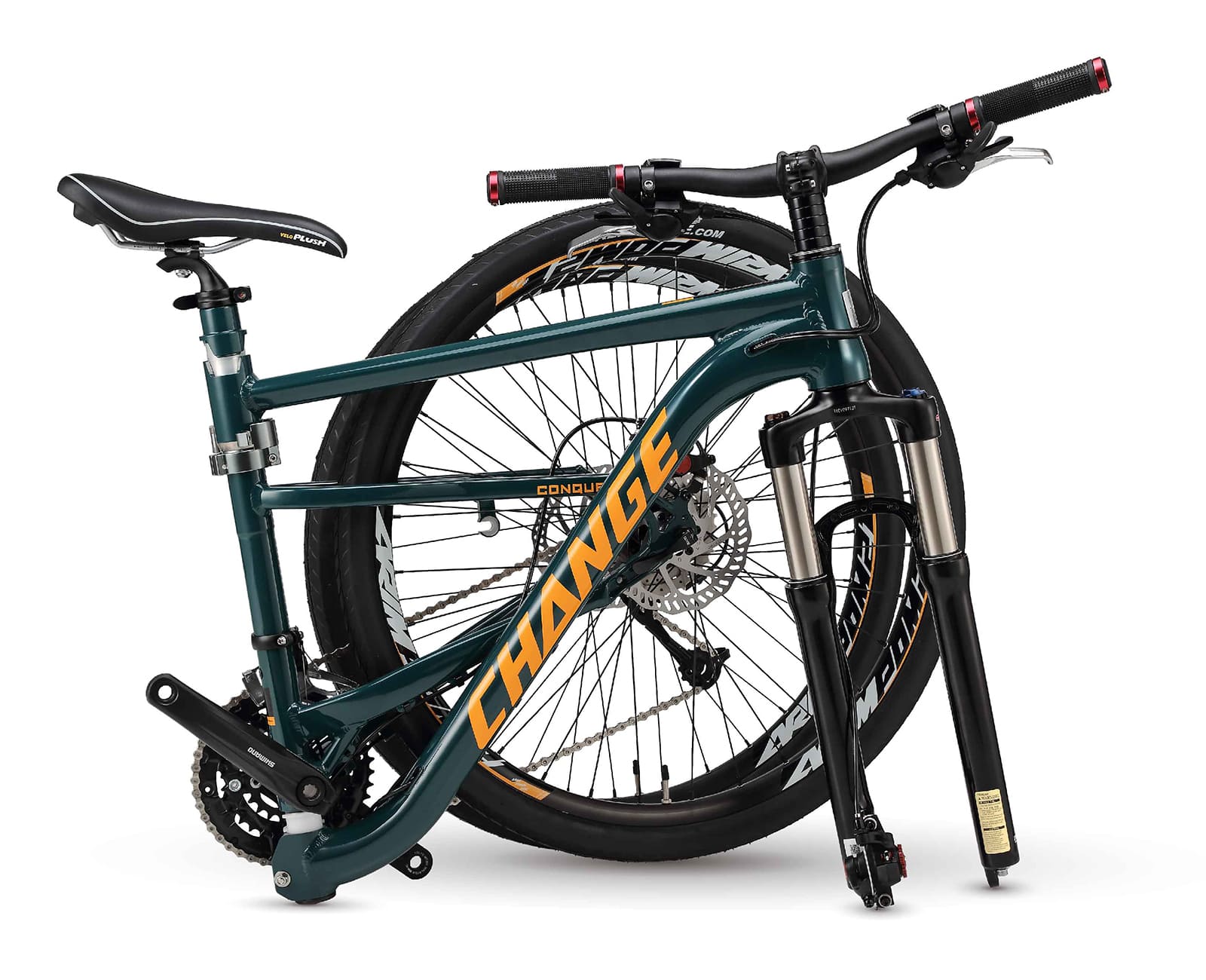 All of which means you can take your exercise and freedom on the road, and protect it against all that salt and road grit that will destroy a series of cheapo bikes, just by doing this. 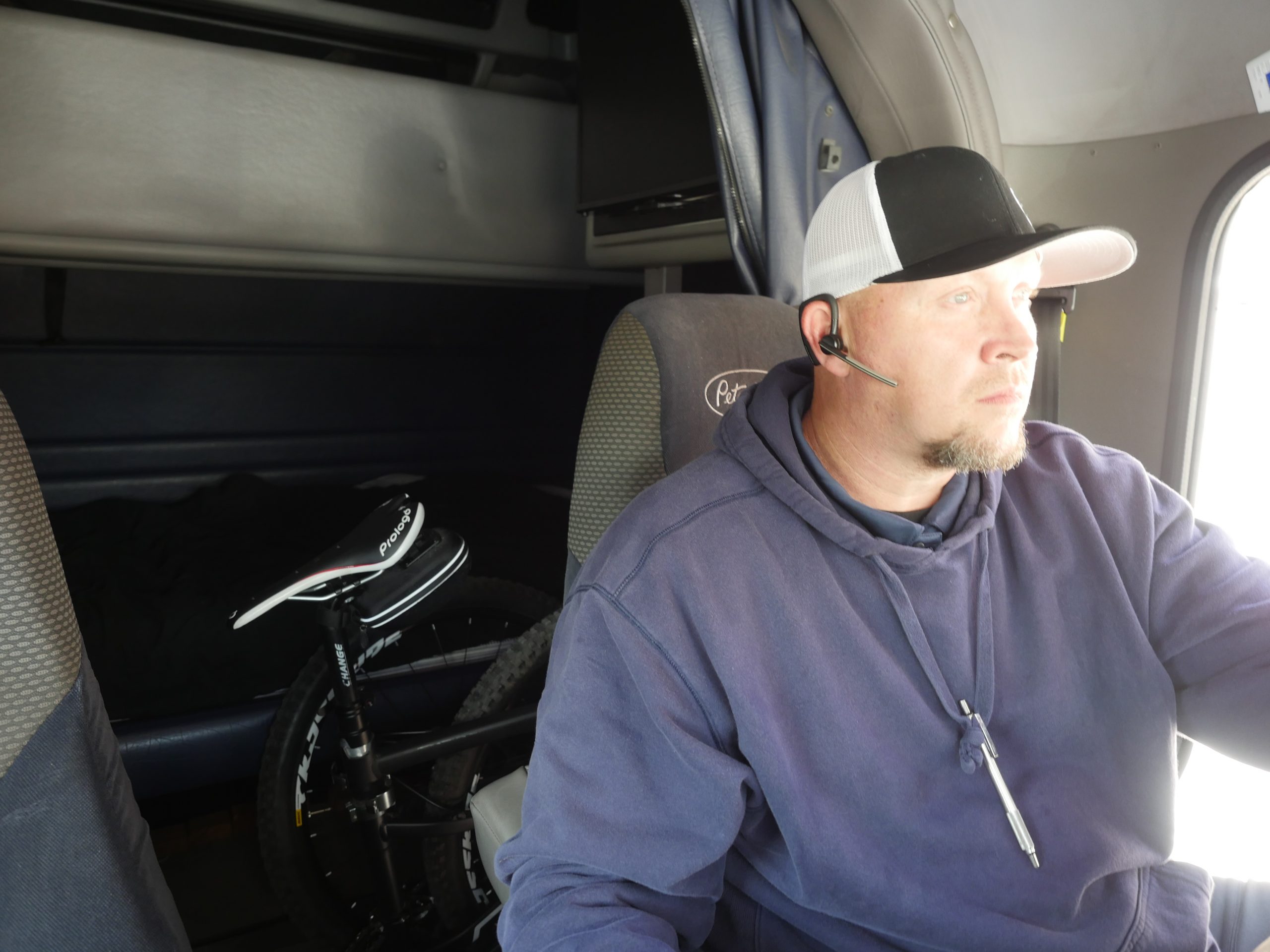 CHANGE MTB full-size folder riding inside without taking up space on the bunk or passenger seat.

Truckers and full-size folders–it’s a huge, convenient step toward better health on the road. Is this something your fleet manager would support as a health benefit?

Happy riding, out on the road!

4 responses to “Why every trucker needs a bike–and where to put it.”