Guest Blog: When less is more.

How a folding bike fits in with my minimalist life style.

When my wife and I found out about a year ago that we were going to have a baby, we did the opposite of what most people do. Instead of immediately thinking about a bigger house, and a bigger car, and more money, and more more more, we decided maybe it’s time to start living with less.

Not only was the house filled with stuff, but it was filled with responsibility. Responsibilities that rob you of your valuable time. Mowing, raking, cleaning, shoveling, repairs, etc. etc. etc. 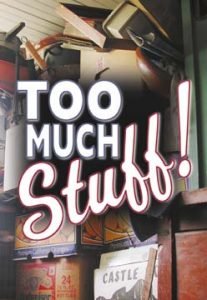 Decision time: Focus on things, or on our new baby?

We made the decision that our new arrival was going to be the priority in our lives, not our things. We either sold, donated or threw away 90% of our belongings. It took a long time, but we got it done and it felt amazing. It was a huge weight off of us, both literally and figuratively.

We now rent a small apartment that is just shy of 500 square feet. Just a living room,  bedroom, bathroom, kitchen, one small closet for clothes, and another small closet for utilities and such. No basement, no shed, no storage. Just the apartment. The doors were also too narrow to fit a couch. Did you know that IKEA makes couches that come in a box that you have to assemble yourself? Neither did I.

There was one thing, however, that I was not willing to let go of–my bike. I’ve always had a bike, ever since I was a kid. The feeling of joy and freedom that I had riding bikes as a kid just never left me, and it will always be with me. There was one big problem, and I mean big. My bike was huge. I had a Dawes Deadeye SS 29ER. 21″ frame with 29″ wheels. 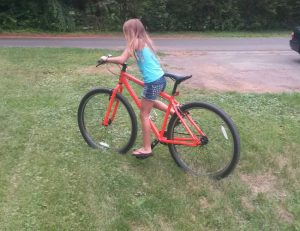 This bike is a beast, and with its steel frame, it was heavy too, nearly 40 pounds. At first, the bike just sat in the kitchen, but with a baby soon crawling around, I knew this wasn’t a good place. I then tried to put it in our utility closet. It fit in there great; Unfortunately, nothing else would. We needed a place for the vacuum, laundry basket, toolbox, and seasonal decorations. Unfortunately, the 29er was going to have to go.

The search begins for the perfect apartment-size replacement bike.

I started my ‘new’ bike search on Craigslist with the intention of just finding something smaller, perhaps a 24″ wheel BMX cruiser or something similar.

Just by chance, I came across 1997 Fuji Marlboro folding bike. Yes, as in Marlboro cigarettes. Apparently this bike was offered in the Marlboro points catalog. In exchange for smoking thousands of cigarettes, you got a bike you were probably too sick to ever ride. Crazy times indeed. 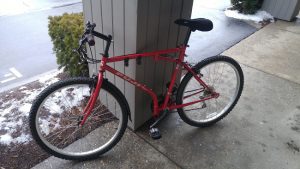 The Fuji Marlboro: In exchange for smoking thousands of cigarettes, you got a bike you were probably too sick to ever ride.

It had never even crossed my mind that folding bikes existed. I was curious and excited about the possibility of a full-size bike that could fold up in my closet and leave plenty of space for everything else. It seemed to solve my problem. My plan was to sell the 29er and use the money to buy the Fuji.

Then I just said to heck with it and offered the seller a trade for my Dawes, even though I paid $400 for it new just a few years back and this 20-year old bike I found was selling for $80. It’s not always about the money after all. The seller, of course, said Yes before I even finished the sentence. 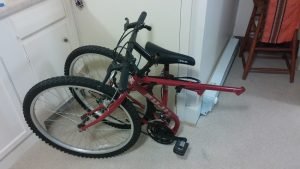 The old steel Fuji folder served me well for about 2 years, but I missed the fun I had on the 29er. The same kind of fun I had on BMX bikes as a kid. The Fuji was great on rail trails and roads, but it was too heavy and awkwardly designed for any kind of trails or jumps, and I needed that.

Don’t get me wrong–I’m not a hardcore rider, but I do like getting the wheels off the ground as often as my old 43-year-old body will let me. So a new search began.

But then a conversation with my wife put things into perspective. We had worked really hard to simplify our lives. We were debt free and comfortable financially. She reminded me that being a minimalist isn’t just about living with less; it’s about creating a life with just enough room for the things that serve a purpose and bring you joy. 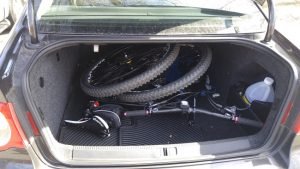 So it was settled. I found my new bike. The ChangeBike 612 Folding Mountain Bike. A full size rugged mountain bike that easily folds up into the trunk of my car and stows away nicely in my closet with plenty of room for everything else. Amazing! 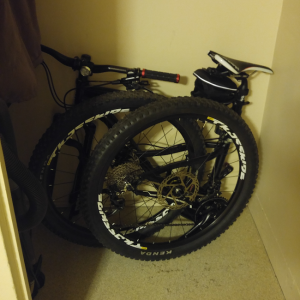 With room to spare in the closet.

Now like I said before, I am not a professional rider by any stretch of the imagination, but I have put this bike through some abuse and it takes whatever I throw at it. It’s also geared nicely, so it’s great on rocky climbs as well as high speed road sessions.

It’s the perfect bike for me. 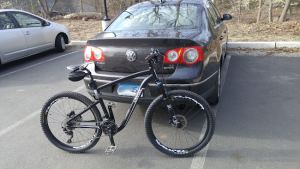 My ChangeBike and my Passat. BFFs. 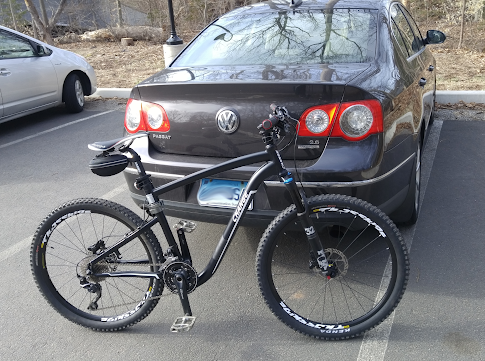