China’s huge bicycle graveyards and why they matter

As countries around the world look for ways to decarbonize, reduce reliance on cars, and grow sustainable alternatives like cycling, China’s evolving relationship with bicycles offers powerful and surprising lessons for civic planners around the world.

Creation and destruction of a thriving cycling culture.

In the 1970’s, when a major bicycling health wave first spread across the US, a cycling lifestyle was already far more deeply embedded in Chinese culture. The bicycle was a proud symbol of the proletariat. The daily commute rush of nearly uniformly-dressed bicyclists flowed through Beijing like a living, flowing Great Wall, proof of the unstoppable progress of the Chinese economy.

By the 1990’s, no country on earth topped the 670 million cyclists in China. A bike was key to a livelihood and a sign that you had “made it” financially; For a man, owning a bike was a prerequisite for marriage.

In 1986, China produced 33 million bikes, more than one bike per second for 11 months. And then . . . the country’s central focus changed. In 1995, the Chinese government decided that bikes were less important than modern mass-transit and the growth of the country’s auto industry.

So an official program of bicycle reduction began. Now, owning a car, not a bike, was the new marker of financial status.

The wealthy port of Dalian even declared itself proudly a “bicycle-free city.”

This massive social experiment came to a crashing halt in 2002 with the SARS epidemic.

Suddenly, with mass transit being a major disease transmission vector, there was a mass exodus into car ownership and permanent gridlock on roads not designed for anything close to this level of volume. (In the United States, we have the opposite problem of cyclists on roads that were designed for lots of high-speed automotive traffic).

The plan to recreate a modern biking culture (and hope it thrives).

In the absence of another pandemic in China—what are the chances of that?—mass transit could move a lot of people, but not everyone. By 2015, some of the world’s worst automotive gridlock was in major Chinese cities. The car needed to give way to something more sustainable, scalable, and modern.

Enter the bicycle. Or rather, Biking 2.0: bike-sharing networks. These are bikes, often e-bikes, designed to be as accessible as possible through modern technologies such as GPS tracking and electronic payments.

There are multiple appealing promises behind bike-sharing networks. You may have heard these touted as your city wrestled with adopting bike sharing:

Based on these promises and impressive year-over-year growth stats, a healthy rivalry developed between the top two bike fleet providers.

These growth numbers helped OFO and MOBIKE raise far more cash than the other providers in the Chinese bike sharing industry, which in turn drove growth even faster. Pretty soon, they were “too big to fail.”

Cracks start to appear in the master plan.

2017 was a big year for the bike-sharing business. The top fleets were expanding at a dizzying speed in China and abroad, with rosy forecasts about growth over the next four years. In just one year, there were dozens of new entrants in China alone.

But there was a storm brewing: Overcapacity.

The top two providers had not only snagged most of the investment money, but also had a combined market share seven times the total size of their next eight largest competitors. The duopoly sucked all the air out of the market, leaving all the rest of the bike share companies with a choice of two options: go bankrupt or expand overseas.

As a result, worldwide domination of bike fleets became the new “must have” opportunity, dovetailing nicely with other high-tech entrants in the “sharing economy” such as AirBnB, Uber, and Lyft. Grow at all costs.

In bike-sharing, OFO led the pack, often expanding into cities suddenly, without any coordination with local officials. OFO was even kicked out of the North American Bikeshare Association after lobbying for a bill in Florida that would eliminate the ability for local cities and counties to regulate bike sharing practices in their own communities.

One reason for this aggressive worldwide expansion was that OFO had massively overproduced domestically. The same bikes being thrown away after successfully suffocating OFO’s domestic competition could now be repurposed at nearly zero cost in other countries to kick-start bike-sharing there. If the bikes get disposed of in other markets . . . better there than in China!

Of course, if the top competitor in a market is able to throw away its main product and still run a business, there’s no room for anybody else. With all companies throwing away their bike oversupply, multi-vendor graveyards became commonplace across China.

And yet, even with overcapacity in full swing, there was even more bad news bubbling to the surface.

One article writer referred to bike sharing as “legal bike theft,” and that has a ring of truth to it. Take any bike from anywhere, ride it, and abandon it wherever. Ignoring the property-usage habits this activity creates, and how it devalues the bike into a disposable commodity, dockless bike sharing still has a serious impact on every city it enters.

If your city has had dockless bike sharing for more than a year, you may also have seen these downsides in the local news:

Countries around the world have struggled with the additional costs of clearing bikes out of streets, parks, and streams, and how to hand the back to the organizations causing the disruption. In Melbourne, for example, bike share owners face a fine of $3,000 for every bike not cleaned up within two hours after being reported abandoned.

Even China rebelled against dockless bike sharing. After 10,000 bikes clogged Shenzhen Bay Park during a holiday, city officials the next day declared a park-wide ban on shared bikes, effective immediately and for all future holidays.

How can dockless bike rental remain profitable under these conditions?

2. Bikes never were the product. It’s about the data.

Run the numbers, and dockless bike rental never had a chance of being profitable, even in China with central government backing and no Melbourne-sized fees. Bikes aren’t the product; rider smartphones are.

Not surprisingly, the biggest backers of bike sharing in China today are those with a strong interest in geolocation data of potential customers. Alibaba (generally well-known in the US) is a financial backer of OFO. Mobike is backed by Tencent (not to be confused with rapper 50 Cent)—less known in the US, yet simultaneously ranking among the world’s top video game companies, social media companies, and venture capital firms.

Ultimately, dockless bike sharing has become a service that trades disposable bike availability and clean-up costs for georeferenced data about who you are and where you go. This data can be used internally to promote local products and services to you by the world’s largest big-data aggregation companies.

Bike sharing at a crossroads: what now?

There are two ways that bike sharing can go.

On the current path of rapidly expanding dockless sharing, riders will continue to trade their data for a discounted service or automatically customized experience, much as Facebook or Google users do. Except now that experience will include other players who don’t currently have access to the same level of non-Chinese user data–such as Alibaba or Tencent.

Might that be a concern for current big-data firms such as Facebook, Google, and Amazon? They probably already have a lot of the georeferenced data already, but why give another big player a way in? Ten years from now, Alibaba and Tencent’s colorful fleets might be replaced by Facebook or Google bikes or scooters (which take up less space on a sidewalk), particularly if the companies work better with regulators.

But that approach still involves treating the bike as a disposable commodity, an issue that will always create some level of conflict with local communities. What happens to all the bikes that were simply left as trash?

An energized commitment to biking infrastructure?

This approach starts with bike docks–predefined, organized, bike-only zones in known high-need areas. Use the dock for a loop ride, such as around the city, or go point-to-point between bike docks.

A docked approach reduces ridership to random endpoints but completely eliminates abandoned bike clutter and associated costs. Riders are charged for usage until the bike physically shows up in another dock.

The next obvious improvement is to make the roads and paths around and between docks safe for biking to increase ridership. A big benefit of this investment is that it also makes other bike owners feel more comfortable biking more often, delivering benefits for the wider community–who may be needed for votes on municipal bond measures.

In some ways, China is the leading example again, investing hundreds of millions of dollars in cycling infrastructure. Xaimen recently completed the Bicycle Skyway, a 5-mile, elevated lane for cyclists only that can accommodate over 2,000 bikes at a time. And by 2022, Zhejaing will have at network of safe, green cycling lanes covering more than 10,000 km.

In the US, we have a long way to go with biking infrastructure. But by reading about what’s happening elsewhere and avoiding pitfalls like disposable bikes in bike graveyards, we can preserve cycling infrastructure funds for projects that add long-term value.

It all starts with a plan for active transportation (sometimes called active mobility). If you feel safe on a bike, you will use it.

After building a no-cars path through the middle of our city, my community is funding a cycling bridge on it to cross two dangerous 4-lane roads. What active mobility commitments does your city have in its master plan? 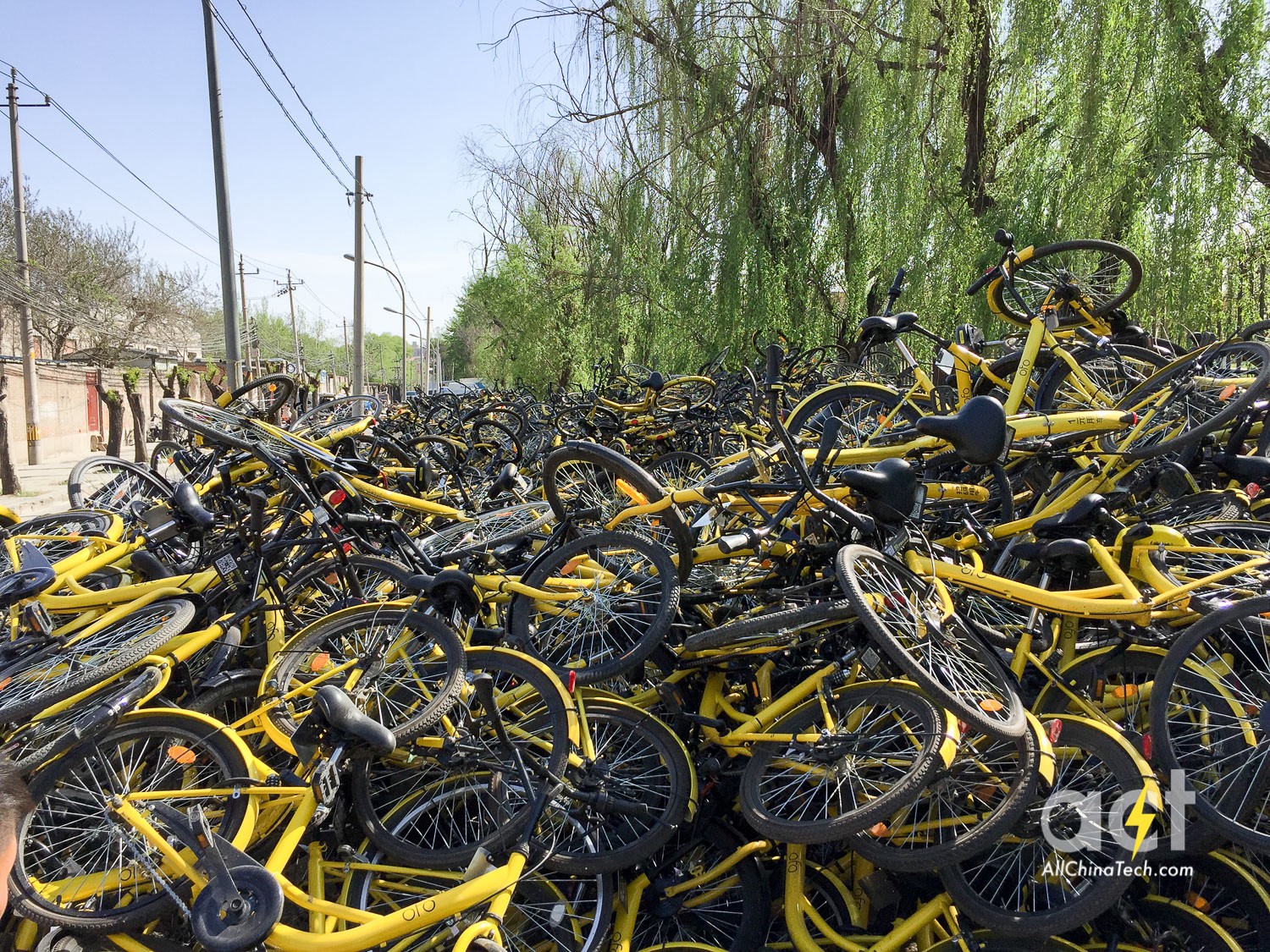