It’s taken me a while to evaluate and write about bike fenders because…well…I’m from Seattle. Our relationship with water is a bit different. I can’t remember the last time I used an umbrella, and simply rely on layers. Wet cycling? Just wear some rain pants and you’ll be fine.

But then there’s the road splatter… 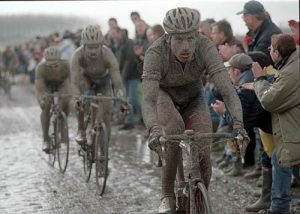 The grit might creep up on you gradually, and you get used to it because it’s everywhere… 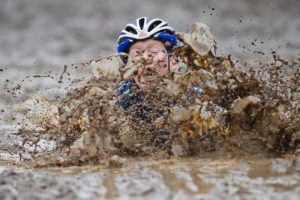 …until one day it’s too much, and you think, “I’m up to my eyeballs in mud! It’s time for some mud guards!”

Mud guards, rain guards, fenders, dirtboards—whatever you call them, they are a good addition to a sloppy winter ride, either for you or the person behind you. So let’s look at which of these guards work best for CHANGE mountain and rugged hybrid bikes.

First, there are reasons why most bikes don’t have fenders. Depending upon the rider, these include:

In addition, CHANGE bikes require the removal of the front wheel when folded. Any fork-mounted fender with significant coverage of the wheel–AKA a useful fork fender–can get in the way when the bike is folded and the bars turned sideways.

This really isn’t about water. It’s about mud. Specifically, it’s about road grit that flies off the front wheel into your teeth, and rear wheels that spew a roostertail of mud onto the back of your jacket. (When commuting or riding in close quarters, that uncontrolled roostertail of road grit will also make you a popular candidate for the tail end of any cycle pace line.)

There’s also the matter of road grit in your gears and chain. By the time the tiny rock bits have worn down your sprockets and there are shifting issues, it’s too late to fix it with a simple fender. 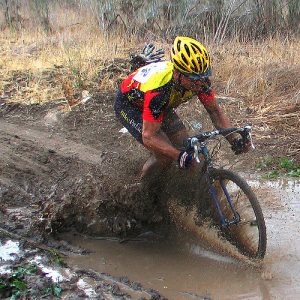 Yes, cyclocross racers spew mud all the time without fenders. But then they go home and wash their entire bikes after every ride.

A good seat-post-mounted rear fender is the German-made SKS X-Blade, available at Amazon or likely your local bike shop. 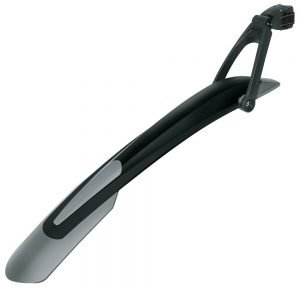 This fender installs in seconds and keeps mud off your back, seat, and seat bag. 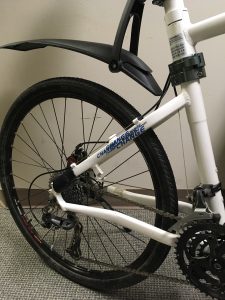 SKS fender on a CHANGE bike

The SKS X-Blade is a 1/3 solution. It keeps your back and seat clean and dry, but doesn’t extend forward enough to protect your chain rings from grit, or extend far enough back to protect the folks behind you. But at least you won’t have mud in your own hair! Make sure you get the model for 26″ and 27.5″ tires.

The SKS front equivalent to the rear X-Blade is the SKS X-Board Downtube Mounted Fender, shown below. Flatbike occasionally sells a similar unbranded version, but any downtube fender should work just fine. The main thing is that the straps don’t break. 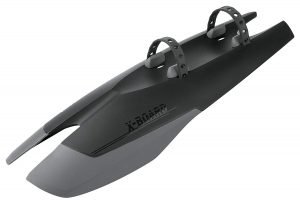 Both of these SKS fenders pop on and off easily. That is both their benefit, if it’s suddenly a rainy day, and their downfall if you don’t want parts of your bike walking off . (Then again, because it’s a full-size folding CHANGE bike, your bike doesn’t have to travel on the back of a car and is likely more safe anyway.)

This term is in quotes because nothing needs to be truly permanent. But mounting fenders with zip ties makes them stay on securely and quietly, for a season or for years.

Permanent fenders are typically full-coverage, and take a bit longer to install. They also tend to come in pairs, so we’re running headlong into the challenge of what happens when you remove the front wheel for transportation; can you still turn the handlebars?

A good fender set we found was SpeedEZ fenders XL, from PlanetBike. 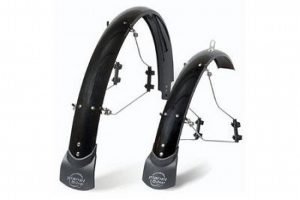 SpeedEZ XL fenders. Not as complicated as they look.

At first, I was skeptical about the “fender on a wire” concept behind these devices. Suppose the wire gets bent? Well…first it’s thick wire and won’t bend unless you need it to. Second, when you need some disparity between the two sides–like reaching over a brake line attachment on one side only–a quick little bend does wonders.

The front wheel–that I will be removing often during bike transportation–is another matter. For now, I’ve attached the front fender with the included straps. It goes on and off easily, taking about twice as long as a downtube fender (so, about 20 seconds). 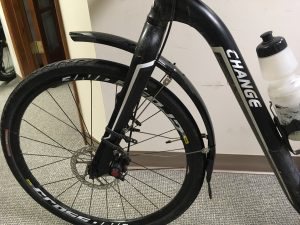 But here’s where things get interesting. I’ve also installed a Revelo THINstem on my CHANGE 611 rugged folding hybrid, so I can fold the bike flat against the garage wall without taking off the front wheel. If I fold the bike with the wheel off, can I leave the fender on and fold the handlebars also, so the front fender and handlebars are both parallel to the bike? 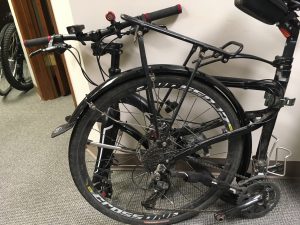 The answer is Yes. And the only side-effect I can see is that the handlebars stick forward about three more inches because of the pivot point on the stem. (I could turn the stem the other way and save six inches of bar length, but then the rear part of the front fender sticks forward, rendering space savings meaningless.)

If you have moderate need for space savings, such as in a garage, apartment, or truck cab, this might be a good approach. But if you have tighter needs, such as for a private plane, boat, or RV, you’re probably better off taking the 20 seconds to remove the front fender when folding the bike.

Fenders are good for you, your bike, and the folks riding behind you. Snap-on fenders (front and rear) are available just about anywhere, so we’ll likely stop carrying them. Permanent fenders are a bit more nuanced fit, so we’ll probably add SKS SpeedEZ fenders to the items we stock at some point.

For now, if you’ve got a CHANGE bike already, you’ve got the info you need to ride it even more of the year. And if you were waiting on fender confirmation before getting a bike (…Hi, Linda…), now you can enjoy riding a CHANGE bike too.

See you on the sloppy trails!

4 responses to “Biking in sloppy weather (fenders and CHANGE bikes)” 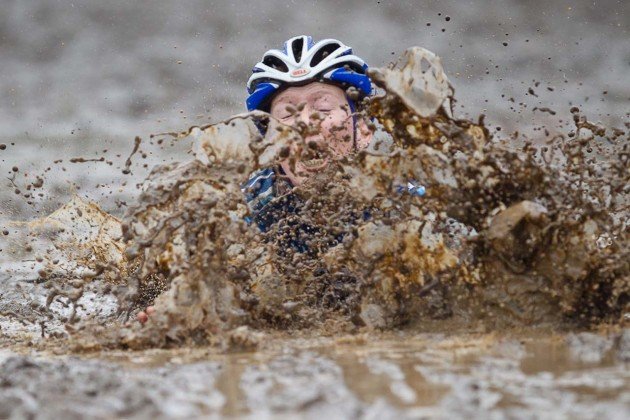