From Clunkers to MTBs: A mountain bike history

It was 1982 when I finally took a blowtorch to my bike frame. Not that I disliked my bike–quite the opposite. My Schwinn Varsity 10-speed was my sole source of transportation, including a 20-mile daily job commute with a bridgeless trail section over a rural Virginia stream.

By “over”, I mean jumping the stream–at least on the way to work. On the way home, the different bank heights meant I needed to ride across or wade across the stream with my bike. And frankly, neither the rear axle nor the rear wheel on a road bike was made to handle this type of abuse, leading to routinely bent rear axles and rusted wheels, but 1-speed bikes were way too slow for a long ride. What to do? 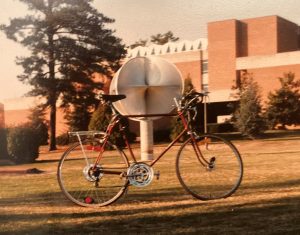 Not made for jumping. Can a welding torch fix that?

Welding was the obvious answer in this teenage brain. Put 24″ one-speed knobby-tire wheels on a 10-speed bike designed for 28″ road tires, which required an additional set of rim brake mounts closer to the axle. That part at least worked. But the half-planned drive-train migration from a one-speed hub back to a road-worthy 10-speed while keeping wider tires? Two entirely different sets of brakes for different diameter tires? I clearly had much to learn about making bikes rugged.

Meanwhile, across the country in Marin County, California, it was a similar story with completely different results. The relatively new local hobby of young males bombing at uncontrollable speeds down a mountainside gravel trail was lots of fun, and routinely exceeded the limits of bicycle design, with bikes often tearing themselves apart in spectacular crashes and unintended dismounts. Duuuude! That was awesome! 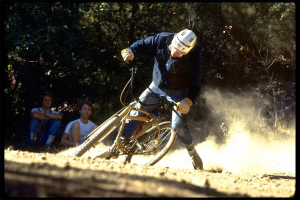 Half-corner, half unintended dismount. With a ski helmet.

To many observers, this was misuse of a bicycle, with plenty of reasons not to get involved. One-speed hub brakes would heat up enough to melt the grease and fail, while 10-speed rim brakes would heat up, glaze the rubber and fail. Even basic steering became impossible at high speed on rough terrain, blowing apart forks and dropping wheels. This was not an activity for sensible bike riders. 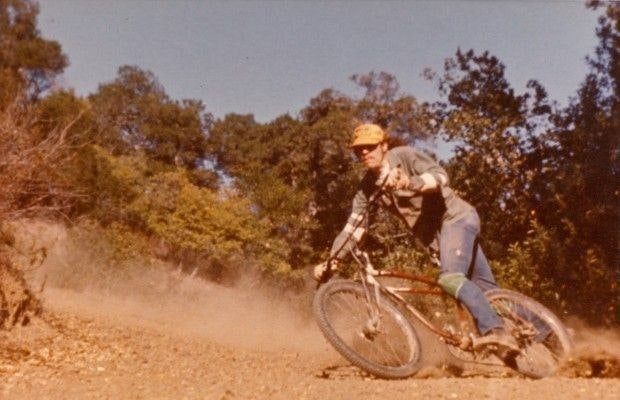 Charlie Kelley, without helmet, looking cool sliding around a curve.

Whether five of these guys–Tom Ritchey, Joe Breeze, Gary Fisher, Charlie Kelly, and Charlie Cunningham–took welding torches to their bikes to put them back together or to downhill-proof them for safer future riding is an open question. What is clear is that, step-by-step, they created an entirely new type of bicycle with these introductions from the motorcycle world:

This new style of bike needed a name of its own, and in a typically non-sensical way that seemed like a good idea at the time, these guys called them “clunkers” or “klunkers”. Charlie Kelly started the “Repack Downhill Clunker” race series down Mt Tam, with prizes and increasing hordes of new downhillers who eventually didn’t have to repack their smoking hubs anymore because the grease wasn’t burning off since the advent of disc brakes. 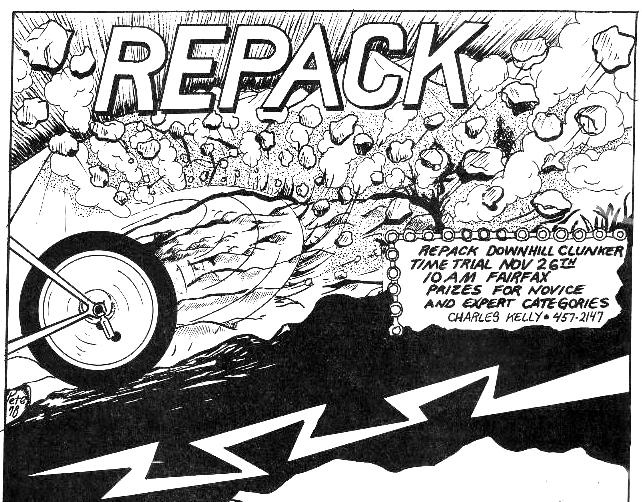 This was a new sport where denim was cooler than Spandex. All those new riders needed new bikes, and a cottage industry was born. 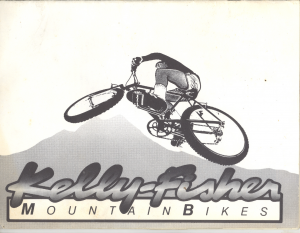 It wasn’t long before Specialized became the first mass-produced mountain bike that perfectly captured the aura of the moment in their broad-market advertising for the StumpJumper: “It’s not just a new bicycle. It’s a whole new sport.” 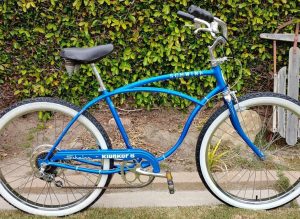 And….Schwinn introduced their bold new entry into the market: The Klunker 5. Bit of a clunker of a name at that point, without specs that made downhill better, so it didn’t sell.

With the right name, the category took off by 1986, Trek and Cannondale had jumped on board in a big way, and millions of mountain bikes were being sold around the world. In the US, mountain bikes were outselling road bikes, even after the US road cycling craze of the 70’s. 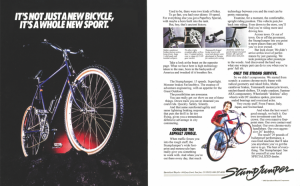 Today, while the road bike world increasingly focuses just on reducing grams and tracking watts, the world of mountain biking continues to be a hotbed of innovation, including full suspension, dropper posts, streamlined gearing, flat resistance and more. 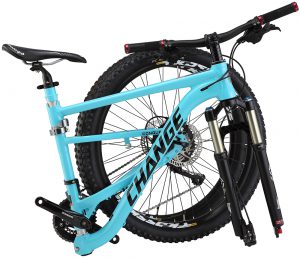 Today’s mountain bikes can be both ruggedness-certified (ISO-4210) with 27.5″ wheels and FOX fork, yet portable to fit safely in a car trunk.

Is a modern mountain bike in your future? How about a folding mountain bike? From the CHANGE 809 folding street MTB to the CHANGE 812 folding off-road MTB, we’ve got you covered for portable adventure.

For further enjoyment about the history of mountain biking, check out these two short videos:

2 responses to “From Clunkers to MTBs: A mountain bike history” 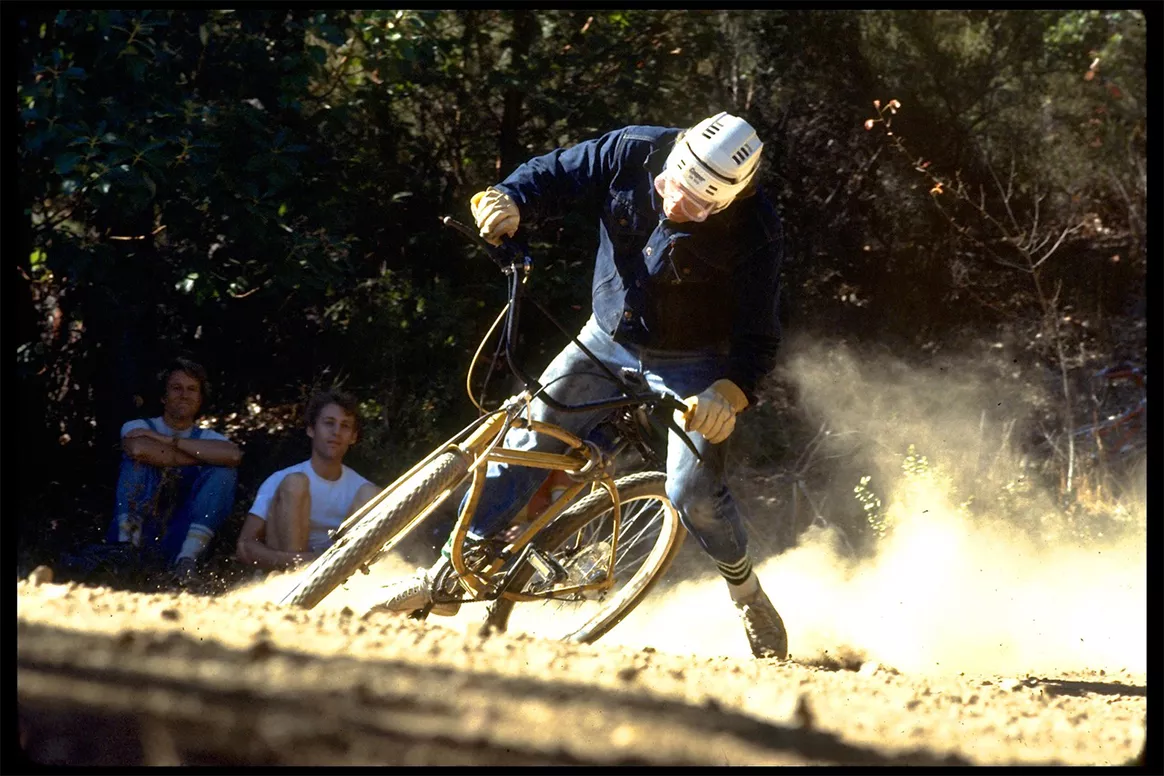