When my kids were young, I followed the same well-worn advice I’d known for introducing kids to bikes: buy the cheapest little bike possible–they’re going to outgrow it anyway–and add a set of increasingly unstable training wheels. They’ll eventually figure it out (or avoid cycling altogether).

Thank goodness that era of thinking is over. With wonderful developments in bike-learning products over the past 20 years, there are multiple ways to share the joy of biking in far more effective ways. One example is the trailer bike.

The ‘trailer bike’: An active ride-along

This category of bike equipment has pretty much flown under the radar, compared to the similarly named ‘bike trailer’.

And yet, it has quietly gained awareness and popularity among parents. Among the many bike trail users I saw this past weekend’s Father’s Day ride, I counted a couple of bike seats, a couple of bike trailers…a father and daughter on unicycles…and at least six trailer bikes. 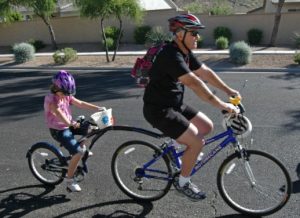 Depending upon the model, trailer bikes can fit kids from 3-9 years old.

The product idea is simple. A kids’ bike frame with the front wheel removed, attached somehow to a parent’s bike. The child gets to experience most of biking–sitting, pedaling, coasting, holding the bars–without the advanced skills yet of steering, balancing, and self propulsion. 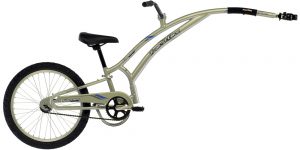 Actually, the trailer bike idea has existed since the early 80’s. But few people knew about it.

The original trailer bike maker, the Adams Company of Canada is still selling its Trail-A-Bike, but now has added the ability to fold it. 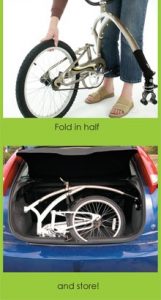 At Flatbike, we appreciated that feature. The perfect complement to a folding CHANGE bike?

The Trail-A-Bike isn’t the only option. The Weehoo iGo offers a lot of protection for younger riders who may not be ready to balance yet, while the Burley trailer bikes (Piccolo and Kazoo) and the Roland Add+Bike offer unique methods of connection that avoid connecting to the seat post. 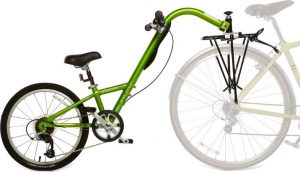 The Burley trailer bike (shown) and the Weehoo iGo can be purchased at REI.

But how safe is it?

At first, the idea of connecting a trailer bike to a potentially unsecure bike rack, instead of a solid seat post, concerned me. But upon further research, it turns out that reality is quite the opposite. Attaching a turning object to a non-vertical post introduces all sorts of unusual stresses on the universal joint, and there is a history of brands with recalls of this joint.

In case you’re looking for a cheap little throwaway trailer bike on Craigslist–we’re not back to that thinking again, are we?–here is a listing of recalled bikes to avoid:

It’s an alarming list–every brand that connects to the seat post! And every one of them involves failure of the universal joint.

There are two possible lessons here. One is that a reliable universal joint is a tough engineering challenge, because all seat-connected manufacturers ran into the same issue. This lends itself to rack-mounted methods like Burley and Roland use.

The second is that after a five-year period from 2008-2011 with recalls by every seat-connected manufacturer, there have been none in the last seven years. This lends itself to the perspective that the entire category has improved, regardless of where the trailer bike attaches.

A trailer bike is a great way to get your kids out enjoying family rides earlier. But know what you’re getting. If you’re buying a used one, make sure it’s newer than 2011, and periodically check the U joint for any signs of failure.

And if you’re buying new, there are several models to choose from. Pick the one that meets your needs the most, we’ll see you out on the trails as a family! 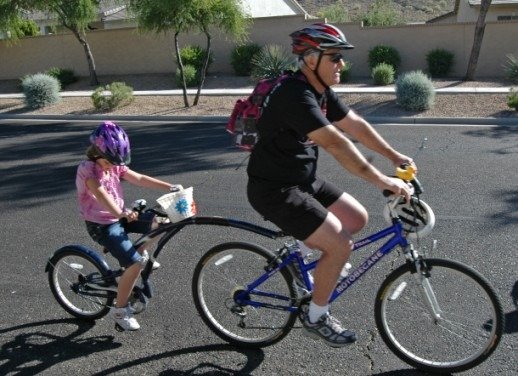