The Hidden Truth About Bike Theft

Every so often, a new bike lock will appear on Kickstarter, promising to be ‘virtually unbreakable.’ Or a magazine will sort a collection of already-released locks by their security, aiming to provide the optimal combination of price and anti-theft security for every wallet. 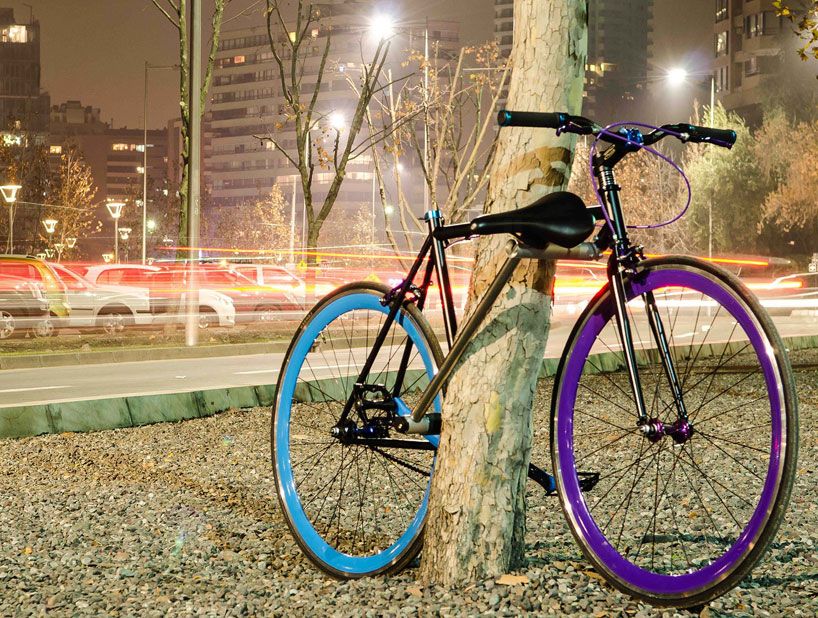 A bike that converts into its own lock? Brilliant! Maybe…

But the ugly truth is, every lock can be hacked, and every bike can be stolen. This does not mean that all bikes are equally theft-prone, and we’ll get to the most powerful theft-prevention later. We’ve sorted theft types and prevention methods below from least effective (and most common!) to most effective.

But first, here’s a sobering reality. In a Montreal survey of nearly 2,000 cyclists in 2014, nearly half had been victims of bike theft, with 961 victims losing a total of 1,890 bikes.

As cycling goes up seasonally, so does bike theft. July is the worst.

So bike theft is rampant. How do we protect ourselves? By understanding the thieves, and what they are and are not willing to do to get a bike.

We’ve all said it before…

That’s exactly how thefts of opportunity start. All a lazy person needs to do is hop on and ride away. 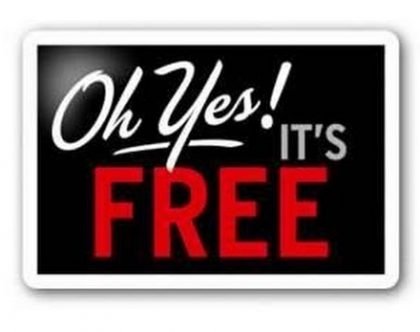 At this level of non-protection, taking your bike is actually easier than walking for the average thief!

If you find yourself having to leave your bike for a short time with no lock, here are five simple ways to make your bike more of a pain to steal: 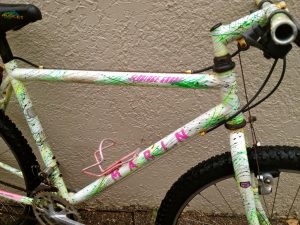 One item NOT recommended here is to ride a cheap or deliberately ugly bike. It still gets stolen.

Think a cheap bike won’t get stolen? Think again. In the Montreal study, over 3/4 of all stolen bikes were under $500. Lazy opportunists will take anything, so why encourage even more bike theft with a steady supply of cheap bikes to steal with no legal consequences?

Other times, a person is on a specific mission to find and steal bikes. All it takes is a bit of preparation.

A cheap cable lock can be cut in a single, one-second motion with the wire cutter inside of a pair of pliers, so that’s a pretty low bar.

What about a ‘real cable lock’ like the Kryptonite brand? Here’s someone with a non-power pocket tool simultaneously cutting through four Kryptonite locks in 45 seconds. And he wasn’t even hurrying…

From there, a three pound chain is a major step up in security, as is a U-bolt lock, but neither one is any match for a drill or an angle grinder. And now, with advances in lithium batteries, these are pocket tools that don’t have to plug into a nearby wall outlet.

I haven’t mentioned bolt cutters here, as they are often 42 inches long and a bit obvious in their intent. All other tools of the trade fit into a backpack, including hacksaws and car jacks.

But we should mention another aspect of preparation—teams. Bike thieves will often work in teams of three: One person to scope out the good bikes and leave (sketchy but no crime), one to cut the lock on the best bike and leave without it (clear act of vandalism), and one to simply walk up and ride away later on that unlocked bike  (a discreet felony). 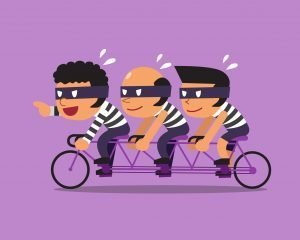 Now you’re not just just trying to outwit a thief. It’s you vs. a 3-thief team.

If you must leave your bike locked outside, your best asset is time. Make it take longer to steal than other bikes of comparable value. Opt for two smaller U-bolt locks instead of one big one. and mount them off the ground so the sidewalk can’t be used for leverage. Five minutes could save your bike. Maybe.

Thieves in this category don’t want just any bike. They want THAT bike. Your bike. At any cost. So it doesn’t even matter what lock you have if this happens… 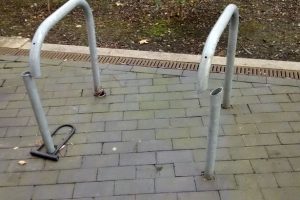 Cut the rack, take the bike, and deal with the locks later in private.

With that mindset, look at this bike secured to a tree with a nice U-bolt lock. Not only is this rider susceptible to losing both wheels, but even the frame is at risk of a simple theft method… 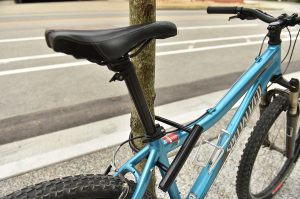 If you don’t care what you damage to get a good bike, just cut the tree.

Bringing your bike into a bike room or ‘bike cage’ helps reduce theft, and many apartments or workplaces have facilities to offer this protection. But even this is not theft-proof. Such facilities are often locked with a standard padlock—and we’ve seen what can happen to those, through cutting, drilling, or leverage force. 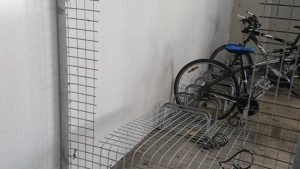 Even the wire sides can be cut to remove the best bikes.

And the theft-prevention winner is… 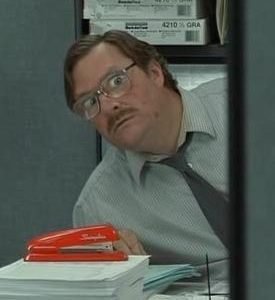 Yikes! If you’re a thief, that’s plenty of reason to look elsewhere, no matter how nice the bike is.

There is simply no secure substitute for keeping your bike with you and your ‘tribe’ at work or home. Around observant people who care. But how? Full-size bikes are awkwardly ‘outdoor sized’, so not often appreciated indoors. Yet there are two separate ways around the problem.

If you’ve already got a bike that you love, the Flatten Your Bike kit is for you. It transforms your bike into an indoor-friendly bike that fits easily against the nearest wall, out of everyone’s way. 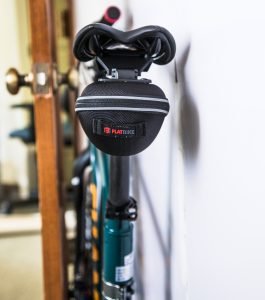 Bike? What bike? When your bars turn 90 degrees, your bike can easily slip into the six inches behind an office door.

The Flatten Your Bike kit consists of a Revelo folding THINstem, plus a set of Wellgo pop-off pedals. 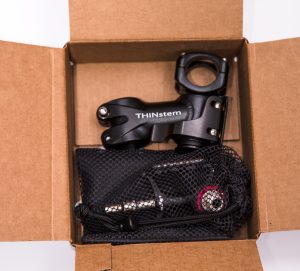 To house-train your bike, simply swap out your stem and pedals for these.

It’s easier than is sounds. With a CHANGE bike, you start like this… 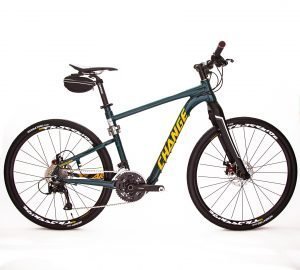 …and literally less than a minute later, your bike is cubicle-sized. Roommate-sized. Safe and secure inside. 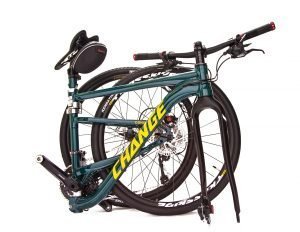 The CHANGE 811 Rugged Hybrid, folded to fit in a car trunk.

It’s not just the CHANGE 811 Rugged Hybrid that folds like this. All CHANGE bikes do. Which space-saving bike is right for you?

Ride lots, be safe, and we’ll see you on the roads. 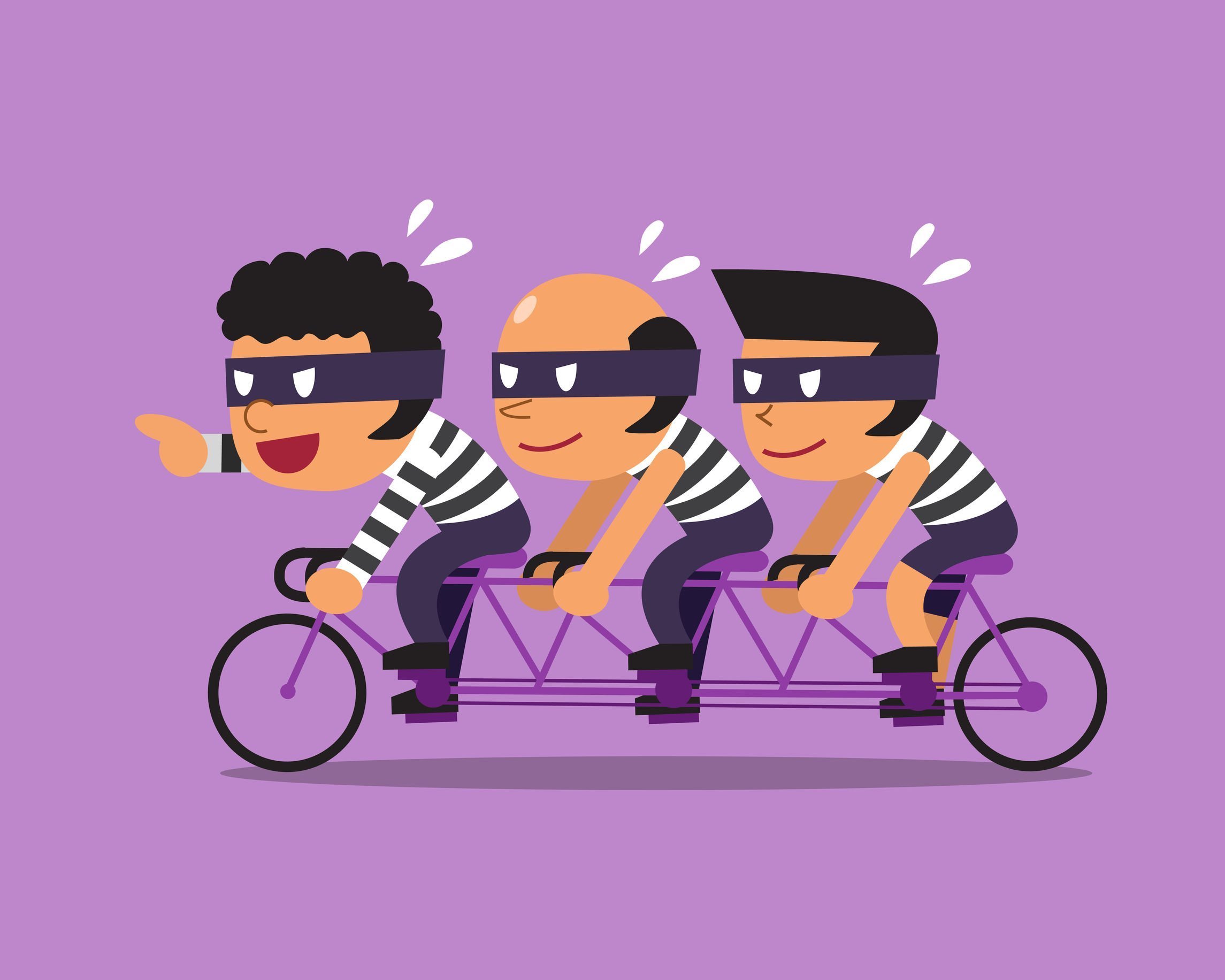